The future exploration of unknown worlds and dangerous areas took a giant leap forward Thursday when Meteron, the Multi-purpose, End to End Robotic Operations Network was successfully validated in an experiment involving ESA, the Belgian user support and operations Centre BUSOC, and the ISS.

Alex worked with the Opscomm team at ESOC who have been designing ways to control rovers remotely from great distances, even from space. Using a laptop configured by the Opscomm team on the ground, he controlled the car-sized Eurobot rover in ESTEC, Nordwijk, The Netherlands using an experimental Disruptive Tolerant Network connection.

This new network, or DTN as it is being called, will send and receive information even when signals are interrupted by radiation and other causes in space. It catches information, holds it, and sends again as soon as signal is returned. This is a vitally important development for the exploration of space and areas deemed too dangerous to send humans.

Paul Steele, Systems Operations Manager for the Meteron experiment, was particularly pleased with the outcome saying “We were happy to demonstrate a fully successful set of collaborative, distributed rover operations. We especially appreciated the speed at which the astronaut performed operations using the Meteron network.” 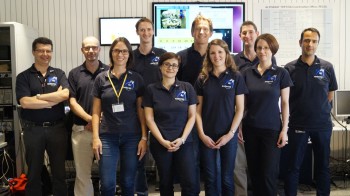 The Meteron Operations Environment or MOE—the computer program that monitors the connection between the Eurobot rover and the astronaut—performed without any issues during the day. For a relatively new piece of software in its first operational use, this is quite the achievement.

The Eurobot rover performed particularly well, and they were able to power it up 30 minutes earlier than expected. The most important consideration is generally battery life in such situations, but Eurobot gave no reason to be concerned about this at all.

Mario Merri, the head of the Mission Data Systems Division at ESOC said “It is a great operational demonstration of new CCSDS standards, in particular the Disruptive Tolerant Network and the Mission Operation Services.”

The mood in the room at the end of the night was celebratory at Darmstadt, with good reason. “Meteron Operations Environment performed really well, without any issue throughout the whole day across ESOC, ESTEC and BUSOC. This is the first time CCSDS Mission operation services have been used operationally over a space-to-ground Link” explained Mehran Sarkarati the Data Systems Manager for the Opscomm team, co-ordinating the experiment from ESOC.

Overall the team were particularly pleased with the role Alex played in the experiment. Not only was he able to execute all the required commands quickly and efficiently, he completed them in record time—allowing for an extra manoeuvre.