As part of ESA’s strategy to foster commercial competitiveness in Europe while focusing on its core aims, the agency has transferred ownership of several ground tracking stations for reuse by external organisations.

By the end of 2017, ESA will have transferred three stations to national organisations in Spain and Portugal, who will take over the provision of satellite tracking services to a wide variety of commercial customers.

The three stations involved in the transfer are all equipped with 15 m-diameter dish antennas, suitable for supporting near-Earth missions, and are located in Spain, at Maspalomas and at ESA’s space astronomy centre near Madrid, and in Perth, Western Australia.

The new operators will be able to use the stations to offer tracking services on a commercial basis to customers worldwide, which also includes ESA, leaving the Agency free to focus on meeting the demanding technical requirements of its deep-space stations, in Spain, Argentina and Australia, and on operation of a select group of four other stations.

On 1 September 2017, ESA’s VIL-2 antenna and its supporting facilities was formally retired after 36 years’ service supporting some of Europe’s most ambitious and successful missions. 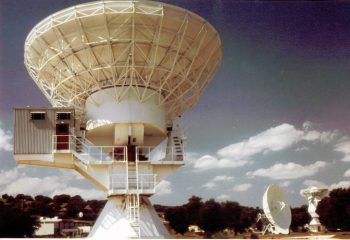 ESAC was inaugurated in May 1975 as the Vilspa station and has been responsible for providing telemetry, tracking and command support to not only ESA satellites but also to several agencies like NOAA, NASA, DLR (The German Aerospace Centre), the Chinese National Space Administration (CNSA) and to intergovernmental organisations such as Eumetsat.

The station, now an ESA Establishment, continues to host the Science Operation Centres of almost all of ESA’s scientific missions.

From the early days of the International Ultraviolet Explorer (IUE) mission, the work now performed at ESAC continues to reach into the depths of space and across the electromagnetic spectrum; providing scientific data to the world.

What began as one of Europe’s first links to the stars has become the heart of European space science.