In the past fortnight, the VMC camera on Mars Express has delivered some of the best images ever, showing the Martian surface in excellent detail, colour and contrast.

If you’re a VMCer (and, if you’re reading this, you are!) and you’ve been following the live (well, as live as possible) frequent updates in Twitter, you’ve been treated to some excellent images of the north polar ice cap, Valles Marineris, the Tharsis Montes region and some of the craters where rovers rove. 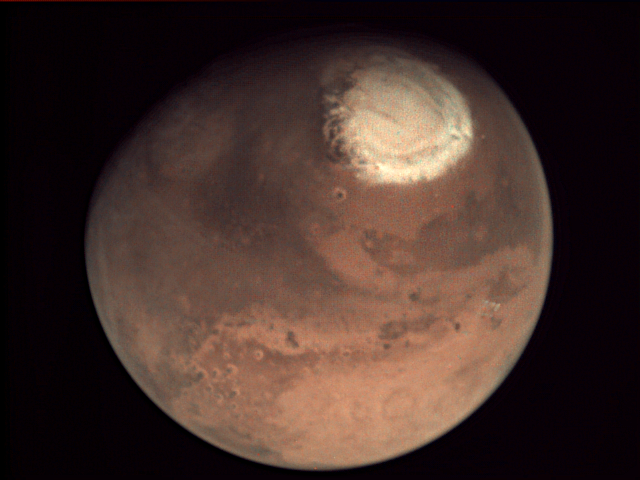 Many of the images in August and September so far were acquired from an altitude above the surface of just 3000-5000 km, giving even the puny VMC webcam a chance to use its simple optics to get a great ‘close-up’ view of what’s passing by below.

In fact, these are some of the closest-ever images that VMC has been able to grab, and were acquired approximately half-way between periares and apoares – the closest and furthest points to the surface in the highly elliptical MEX orbit.

And they contrast (nicely!) with the typical VMC images we’ve been used to seeing for the past near-decade, which were all taken at or very close to apoares at about 10 000km.

Why the great pics?

Simon Wood, spacecraft operations engineer on the Mars Express team here at ESOC in Darmstadt, says that the delicious close ups are now possible because VMC has ‘gone pro’.

He points to the big news last year when VMC was promoted to the status of a pro science instrument. Its images are now being studied – and new software is being developed – by the Planetary Sciences Group of the University of the Basque Country, Spain.

The promotion to adulthood meant that observing time (and, hence, spacecraft pointings) for VMC can be programmed into the overall mission science timeline, in coordination with pointing slots for the rest of the instruments, which is a higher priority than when the camera was being used only for outreach, education and PR.

Formerly, VMC observation slots could only be programmed on a strict non-interference basis with the spacecraft’s ‘real’ science instruments, with the effect that VMC only got to peek at Mars from high above, at apoares, the highest point in MEX’s orbit, which few or none of the other instrument teams ever requested as most of their observations require the spacecraft to be close to the planet.

So, back to the question: why the recent series of great close ups?

“To enable it to be used as a scientific instrument, it is necessary to understand how the colours, brightness and shadows on VMC images match up to reality,” says Simon.

“In general, instruments need to regularly collect data for calibration because they change with time. In the particular, in the case of VMC, these data were never collected in the first place, as it ‘wasn’t an instrument’.”

“The low-altitude images are being acquired to obtain what we call flat fields – to correct the pixel response variability.”

“So as part of this process, in August and September, we are taking a series of images at lower altitudes where we have good data from other instruments to which we can compare and correct VMC images. This will help calibrate the output from VMC in future.”

In the meantime, for the rest of we VMCers, it’s a chance to enjoy some terrific shots of our second-favourite planet, as updates are auto-tweeted and all images auto-posted into the dedicated Flickr site.