Got an update on TGO aerobraking progress at mid-day today from Silvia Sangiorgi, our deputy spacecraft operations manager here at ESOC. She wrote: 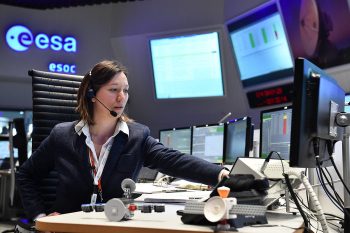 PLM 1 [on 15 March] was nominal. [Since then] we have already had two percienter (= periapsis – point of closest approach above Mars) passes at 150 km height; they gave us, respectively, 11 and 10 mm/sec of delta V. All is nominal and working fine for the moment 🙂 PLM 2 will be tomorrow at 11:45 UTC (12:45 CET); it will bring us a further 10 km down. Flight dynamics are producing the commands now – these will be uplinked tonight. Ciao, Silvia

Tomorrow’s burn is planned to provide a delta-v (change in velocity) of 58 cm/sec and targets a pericenter hight of 140 km.

If the team are already seeing ‘changes in velocity’ due to the atmosphere on the order of 10 to 11 mm/second, then TGO is already ‘feeling the burn’.

PLM refers to ‘pericentre lowering manoeuvre’ – how the engineers on the TGO team refer to the seven (planned) thruster burns that are slowing TGO, allowing it to sink, step-wise, lower in its orbit until atmospheric drag reaches a certain load. Then we’ll be in aerobraking proper!

The seven manoeuvres are planned for:

Note that pericentre and periapsis, and apocentre and apoapsis are, when referring to Mars, often used interchangeably.