To recap: Based on an assessment of information on hand as of late yesterday, it was clear that the conjunction – a close flyby – of a ca. 15-cm chunk of space debris expected tonight at 23:10:55 UTC would be too close to ESA’s Swarm-B spacecraft, in orbit at about 500 km altitude. 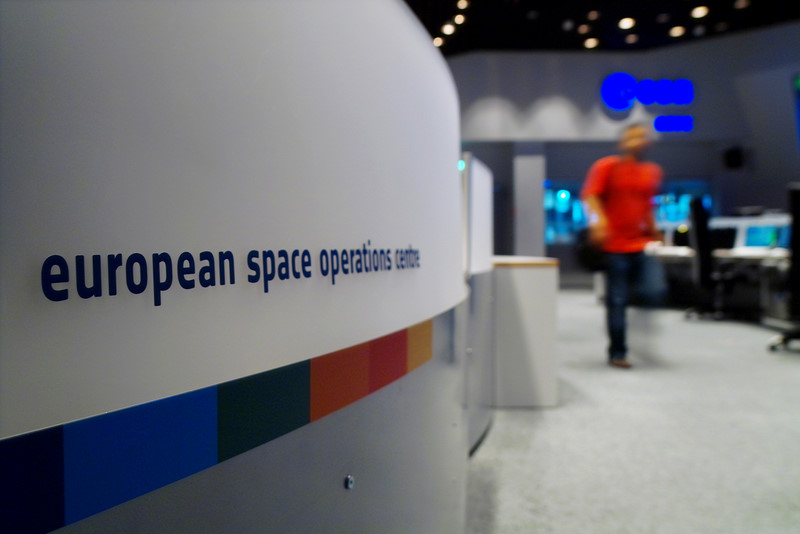 The flyby would violate the risk thresholds set by the mission, and in particular, our knowledge of the object’s trajectory was still too uncertain to exclude the possibility of an actual collision.

The assessment yesterday involved experts from the flight control team, the space debris office and the flight dynamics team here at ESOC, as well as the mission manager in ESRIN.

As a result, the flight control team prepared to conduct an avoidance manoeuvre and uploaded instructions to Swarm-B this morning at 08:51 CET that would have automatically commanded the craft, later this evening, to operate its thrusters and boost it approximately 30m higher in its orbit.

This morning, two new sets of information were received that helped make the cancellation decision.

First, during the same ground station communication slot when the manoeuvre commands were being uploaded, the Swarm-B spacecraft also downloaded a fresh set of GPS data recorded on board during the previous approximately 20 hours. The highly precise data provided a record the spacecraft’s actual current orbit.

“This allowed us to conduct a fresh orbit determination, and this could be used to reduce uncertainty in the spacecraft’s position at the forecast conjunction time this evening to very small values,” says Detlef Sieg, the flight dynamics specialist assigned to Swarm.

“As this was acquired less than 24 hours prior to tonight’s forecast conjunction, it had lower uncertainty related to the object’s position during the conjunction than previous tracking data,” says Klaus Merz from the Space Debris Office.

Klaus and his team ran a number of detailed manual calculations using the new object data and ESA’s own debris assessment software tools, assessing the risk of an actual collision if an avoidance manoeuvre were performed and if one were not.

“As a result of the reduced uncertainties in the object’s trajectory, the risk of collision is now well below the mission’s threshold,” says Klaus.

Knowing that time was crucial, the flight control team led by Elia Maestroni called a meeting at 11:40 CET to discuss the new data, obtain opinions from everyone and provide final advice to the mission manager, Rune Floberghagen at ESRIN.

With the auto-execute manoeuvre commands already uploaded and were enabled, and with only one more ground station pass – a 12-min communication window starting at 12:00 CET – remaining before the manoeuvre (in which to disable the commands), the meeting was brief!

Following updates from space debris and flight dynamics, it became clear that the risk threshold was no longer being violated by the conjunction.

But one remaining concern had to be addressed: now that the commands were uploaded and on board, was there any risk to the craft in disabling them?

Elia Maestroni (who will take over as Swarm spacecraft operation manager when Frank-Jürgen Diekmann retires in just a few weeks’ time) was quick to reply. “Uploading, enabling, disabling, deleting and otherwise working with commands on the spacecraft are the bread and butter of what we do,” he says.

“We could quickly confirm that removing the commands could be done in a very safe way and would have no effect on the continuing operation of Swarm.”

At about 11:55 CET, the meeting wrapped up with Mission Manager Rune Floberghagen announcing what everyone knew was the best decision.

“Given that the conjunction flyby risk was now below the limit for our mission, and taking all other factors into account, I asked the teams at ESOC to abort the debris manoeuvre,” says Rune. “This was the safest way to continue with our mission.”

By the time Rune finished speaking, one of the flight control team engineers had already left the room, walking briskly to the Earth observation missions’ dedicated control room where, just a few minutes later, and after the ground station at Kiruna re-established contact with Swarm-B, the manoeuvre commands were set to ‘disable’.

And Swarm-B – a marvellous spacecraft on a vital science mission 500 km above our heads – continued safely on its way, oblivious to all the human activity focussed on its well-being in the past 36 hours.

Without an effective and experienced ‘team of teams’ at ESA working in the areas of space debris, flight dynamics, flight control, ground stations, science and payload and many others, we would not be able to adapt to the increasing density of debris objects. In this case, a manoeuvre proved ultimately unnecessary, but we were fully ready if one had had to be done – and that’s thanks to the expertise of the teams supporting Swarm. Well done to everyone and I look forward to many more years of exploring our Earth with you from space.

Follow regular news and results from the Swarm mission via: https://www.esa.int/swarm

Space debris conjunction alerts like the one that we reacted to this week are becoming increasingly frequent for all of our Earth missions. This highlights the need for, in the near term, maintaining and improving our ability to detect, analyse, assess and characterise the space debris environment, and, in the long term, for all space-faring organisations to strictly follow the mitigation guidelines that aim to limit the creation of new debris. The current space debris situation is already at a ‘tipping point’ in some orbits. This requires urgent action.

This blog post brings to an end our coverage of the past 1.5 days at ESOC, which saw coordinated action taken to react to an unexpected situation. It really was just one more example of our daily work in flying missions that orbit Earth, watch our Sun, observe the Universe and explore deep into our solar system.

We hope you’ll join us on this fascinating journey!