To recap: yesterday, it became clear to the Swarm mission team at ESA that an avoidance manoeuvre will most likely be necessary today to boost Swarm-B out of the path of a ca. 15-cm piece of fragmentation debris from the former Cosmos-375 spacecraft (see details in our previous blog posts – Ed.). 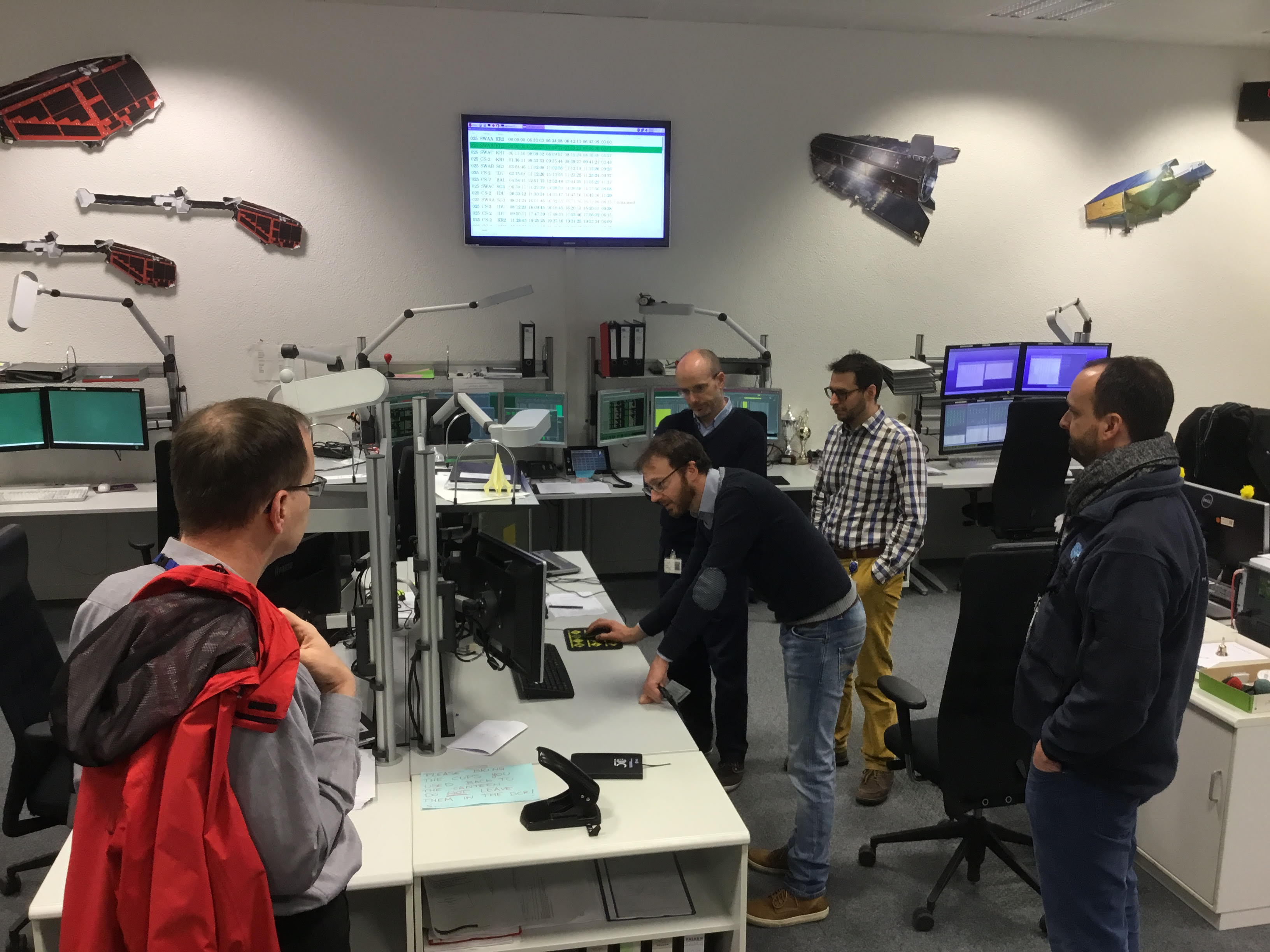 Commands for a debris avoidance manoeuvre were uploaded to Swarm-B from the EO mission control room at ESOC on 25 January 2017 at 08:51 CET. Credit: ESA

Based on an update received by the Space Debris Office here at ESOC from JSpOC this morning, the conjunction between Swarm-B and the debris object is forecast for this evening at 23:10:55 UTC, which will be 00:10:55 CET on Thursday, 26 January.

Yesterday afternoon, teams at ESOC worked with the Swarm mission manager to coordinate a response to the forecast conjunction. If nothing were to be done, and based on current information, the debris object would pass too close to Swarm-B – closer than allowed by the risk limitations and the degree of uncertainties in the orbits of the object and the spacecraft.

The result: today Swarm-B may conduct a debris avoidance manoeuvre to boost itself ca. 35 m higher in its orbit, effectively increasing the forecast radial component (i.e. along the imaginary line from the centre of Earth through the spacecraft) of the miss distance of the object to 55m (below) – close in cosmic terms, but quite safe given present uncertainties.

Conducting a ‘manoeuvre’ means that Swarm-B will activate its thrusters for about 44 seconds, providing the thrust (about 10 mm/second) required to boost it higher in its orbit.

The three identical Swarm spacecraft are equipped with a cold gas thruster system; each has 24 microthrusters providing either 20 or 50 mN. Some are used for orbit control and some are used for attitude control (more details on Swarm technology via ESA’s EO Portal).

At ESOC in Darmstadt, Germany, yesterday, specialists from the Swarm flight control team, the Space Debris Office and the flight dynamics team were involved in the complex and exacting process of assessing the situation, formulating a plan and preparing the commands for upload.

In agreement with the flight control team and the space debris experts, approval for preparing the manoeuvre came from the Swarm Mission Manager, Rune Floberghagen, at ESRIN.

“This plan is a good one and it will have the primary result of ensuring spacecraft safety now and providing some good margin against a possible future encounter with this debris object,” said Rune yesterday.

There will be a final meeting this morning at 11:40 CET to make a final GO/NOGO assessment.

If GO, the manoeuver will be conducted by the spacecraft automatically at 22:23 UTC (23:23 CET) tonight, around 45 minutes (half an orbit) prior to the forecast conjunction.

Commands to effect the manoeuvre were uploaded to Swarm-B this morning starting at 07:51 UTC (08:51 CET) during a regularly scheduled communication slot via ESA’s 15m ground station at Kiruna, Sweden.

The commands as uploaded are time-tagged and ‘enabled’ and the manoeuvre will take place without any further interaction from the flight control team.

If any additional information on the debris object is received this morning and the 11:40 meeting determines no manoeuvre is needed, there is yet another spacecraft-to-ground communication slot via Kiruna, lasting about 12 minutes, at 11:02 UTC (12:02 CET) this morning, during which the commands could be disabled.

Our next blog post will provide details on the final decision, the manoeuvre timeline, and how the team will learn about the results.