This week’s ‘fresh install’ is the second such update for TGO since launch, and will include fixes and patches for a number of issues discovered since launch. 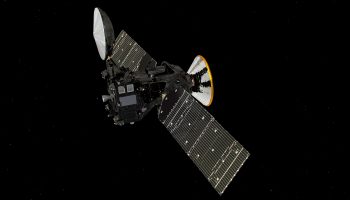 We posted a detailed description of the last update, and the procedure for today was substantially similar to that one, done in April.

Today’s update activates 3 MB of new code, that was transmitted a few days ago via ESA’s 35-m diameter deep-space station at New Norcia. Today’s critical action was centered on rebooting the computer, triggering a restart with the new software.

In particular, this OS update will ensure the craft is more robust, especially in the event of any unexpected problems, during the upcoming aerobraking campaign, set to start in March and last until early 2018.

During aerobraking, the craft will skim the wispy tops of the martian atmosphere, causing a tiny amount of drag that will slow TGO and steadily lower it onto the required 400-km science orbit (we’ll post more news on aerobraking preparations shortly).

The spacecraft, by the way, is in excellent health.

To date, TGO has only experienced one ‘safe mode’ – when a glitch causes the spacecraft to reboot itself and wait for corrective commands. That happened during preliminary in-flight testing of the main engine, where a faulty configuration was quickly identified and fixed. The craft later performed highly accurate burns of the engine for several deep-space manoeuvres and the Mars orbit insertion.