On 3 October, part of the overall command sequence for the Schiaparelli module’s landing-demonstration and science mission was uploaded to ESA’s ExoMars Trace Gas Orbiter (TGO), now enroute to the Red Planet. 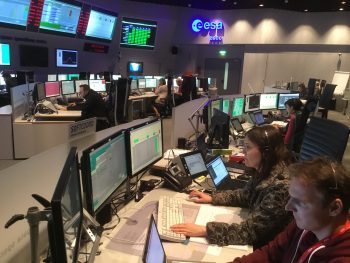 The upload was conducted by the TGO flight control team working at ESA’s ESOC operations centre in Darmstadt, Germany, and marked a significant milestone in readiness for arrival on 19 October.

The next day, on 4 October, the uploaded commands were cross-loaded from TGO to the Schiaparelli module, which is hitching a ride to Mars.

The rest of the Schiaparelli mission timeline, containing additional commands for the post-separation phase, will be uploaded to the module on 7 October.

“Uploading the first tranche of command sequences is a milestone that comes about following a great deal of intense cooperation between the mission control team at ESOC and specialists from TAS-I [Thales Alenia Space – Italy], the industrial lead for Schiaparelli, as well as for ExoMars overall,” says TGO Flight Director Michel Denis.

“On 5 October, following simulations for Schiaparelli surface operations and the TGO post-orbit insertion phases at ESOC, we gathered together with the mission control team and the ExoMars project representatives from ESTEC to finalise the Schiaparelli mission timeline for the post-separation phase,” says Carlo Cassi, the Schiaparelli system manger from TAS-I.

“Although it was late in the evening following a long day, everybody gave maximum cooperation, and we can now ‘bless it’.”

Schiaparelli’s operations – the functioning of its flight control systems and science instruments – are governed by a time-tagged on-board command sequence, ensuring that the lander can conduct its mission even when out of contact with any of the Mars orbiters that will serve as data relay platforms. 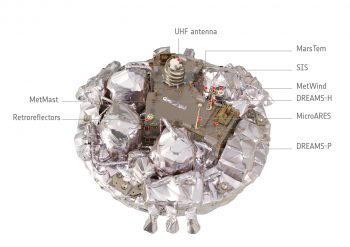 This artist’s impression shows the interior of the Schiaparelli entry, descent and landing demonstrator module. Schiaparelli, part of the ExoMars 2016 mission, was launched together with the Trace Gas Orbiter on 14 March 2016 and will arrive at the Red Planet in October. Credit: ESA/ATG medialab

Automated operation also ensures that the lander exits from its sleep periods when on the surface – hibernation, which saves power – in time to be ready for subsequent communication passes.

“We worked with our colleagues from the Schiaparelli industry team over the past few days on the final planning of the Schiaparelli timeline, which, although automated, can cater for a variety of situations including some failures,” says TGO Spacecraft Operations Manager Peter Schmitz.

One of the timeline’s most crucial moments will be landing on the Red Planet’s surface, set for 14:48:11 UTC (16:48:11 CEST) on 19 October. Now that this time has been fixed, the rest of the commands will play out in sequence counting down or up.

During landing, these commands include ejecting the front and back aeroshells, operating the descent sensors, AMELIA, deploying the braking parachute and activating three groups of hydrazine thrusters to control its touch-down speed.

A Doppler radar will measure the height starting at about 7 km above the surface and at an altitude of around 2 m, Schiaparelli will briefly hover before cutting its thrusters, leaving it to free fall.

Once safely on the surface, the module’s timeline will command the functioning of the surface science payload, DREAMS, which will operate for a planned 2 sols, and possibly longer.

DREAMS operations are optimised to make the most of the limited energy available, so they are performed in predefined windows rather than operating continuously. Typically, DREAMS will function for 6 hours every sol. 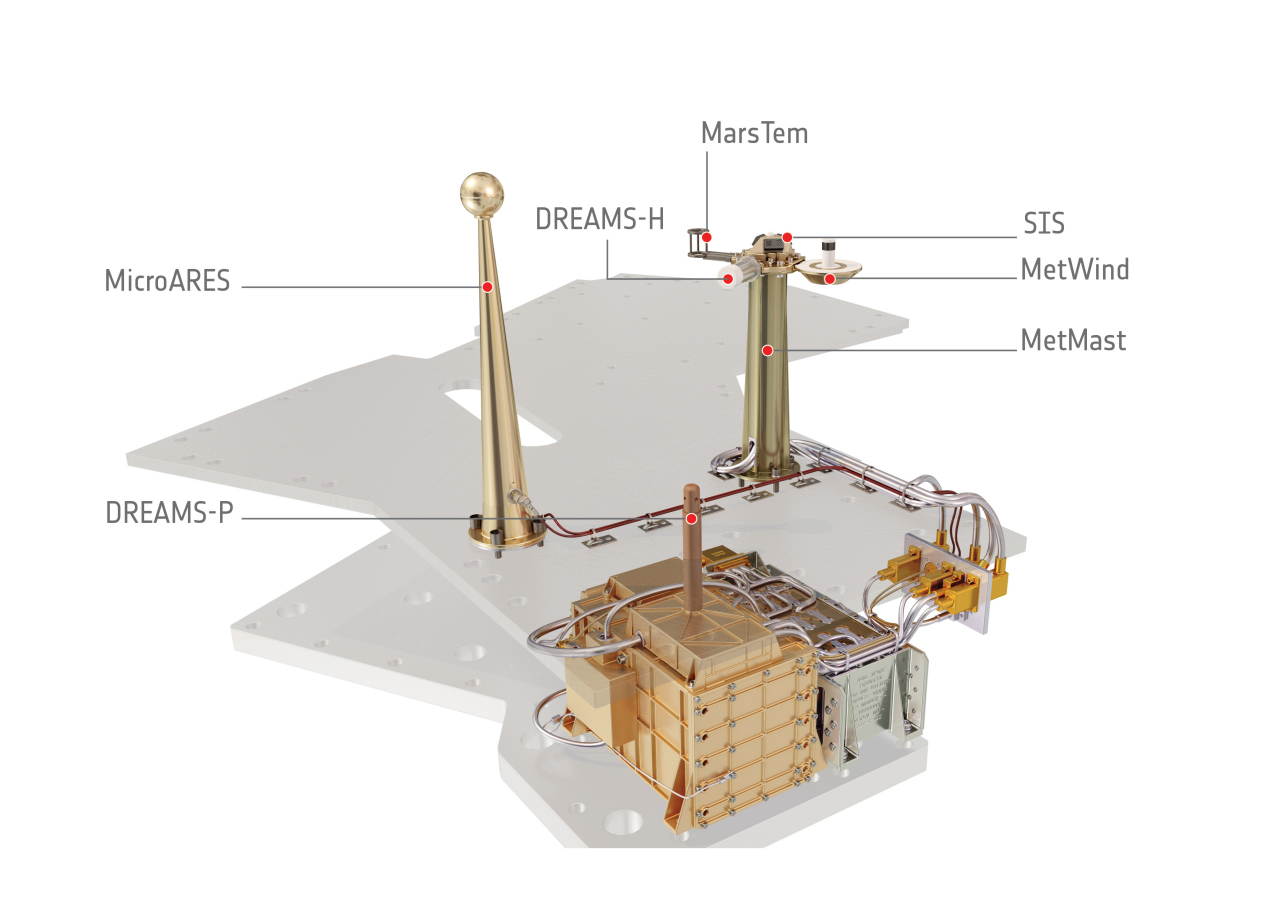 This artist’s impression shows the DREAMS science package that will be carried on the Schiaparelli entry, descent and landing demonstrator module. Schiaparelli, part of the ExoMars 2016 mission, will launch with the Trace Gas Orbiter in March 2016 arriving at the Red Planet in October of that year. Credit: ESA/ATG medialab

(See images of the actual DREAMS hardware during wind-tunnel testing below.)

The timeline will also switch on the module’s transmitter during a series of pre-planned slots to send recorded data up to ESA and NASA orbiters, which will conduct relay overflights, transmitting the data back to Earth.

These relay slots include 18 provided by NASA’s Mars Reconnaissance Orbiter (MRO), 8 provided by Odyssey and 6 by Maven.

ESA’s Mars Express will conduct a planned series of 14 overflights. 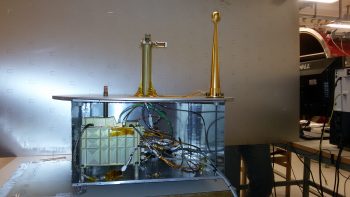 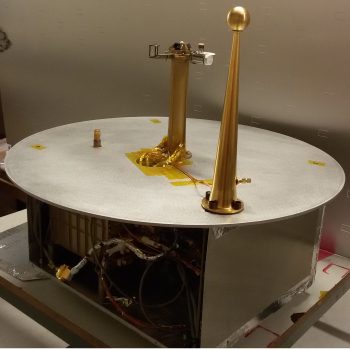 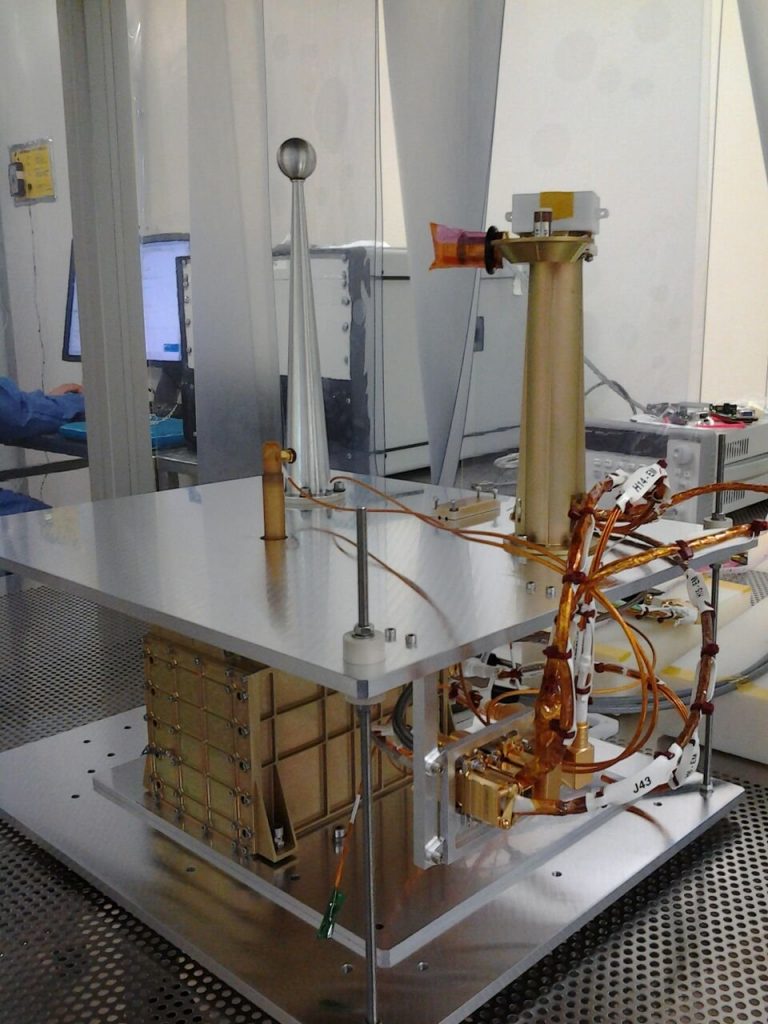