Why ExoMars’ ride to space takes the time it does

This blog post was contributed by ESA’s Michael Khan, at ESOC’s Mission Analysis Office with inputs from  Marc Toussaint at ESA Launchers directorate. It’s an excellent overview of the how the Proton rocket will loft ExoMars and Schiaparelli into orbit tomorrow and, specifically, what will happen during the approx. 11 hours between liftoff and separation. This post contains the best background information we have and keep in mind that there could be some minor inconsistencies between this text and anything published by Roscosmos or Khrunichev, which should be taken as authoritative. 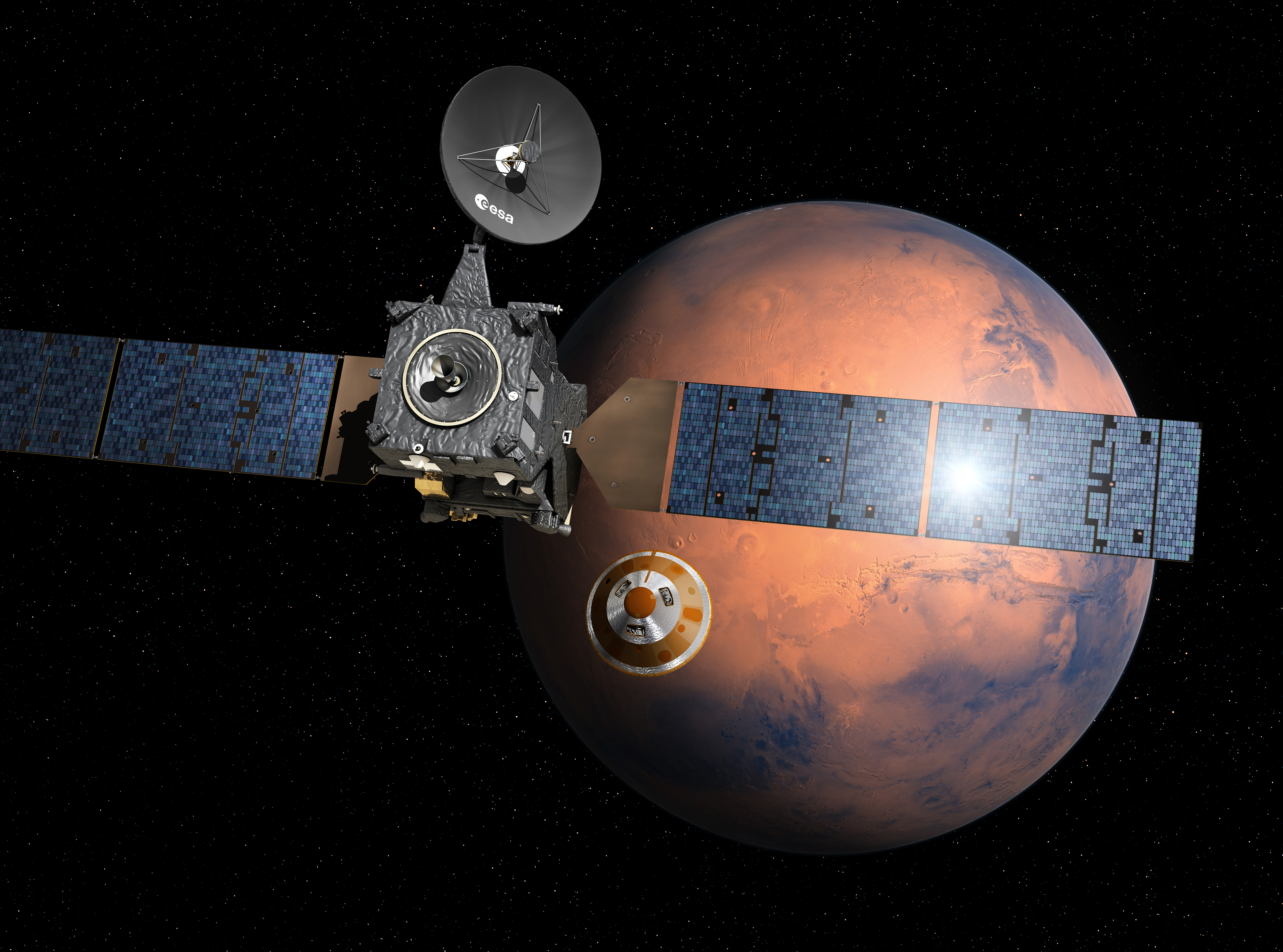 Artist’s impression depicting the separation of the ExoMars 2016 entry, descent and landing demonstrator module, named Schiaparelli, from the Trace Gas Orbiter, and heading for Mars. TGO will be launched in 2016 with Schiaparelli, the entry, descent and landing demonstrator module. It will search for evidence of methane and other atmospheric gases that could be signatures of active biological or geological processes on Mars. TGO will also serve as a communications relay for the rover and surface science platform that will be launched in 2018. Credit: ESA–D. Ducros

On 14 March 2016 at 9:31:42 UTC, a Proton M / Breeze M rocket will lift off from Baikonur Cosmodrome with the ExoMars 2016 spacecraft under its payload fairing.

10 hours and 45 minutes later, the rocket will release its payload and ExoMars will be on an Earth escape trajectory – the ExoMars 2016 mission will have started.

But hey: ten hours and 45 minutes? Almost half a day? Why does it take so long this time? After all, with both the Mars Express and Venus Express missions the escape sequence was over within 90 minutes from liftoff.

Indeed, this long escape sequence is linked to the choice of the Proton M / Breeze M launcher. To understand why it is like that, we should have a closer look at how the rocket operates during the launch sequence.

Going to space with Proton

Proton is one of the most successful heavy-lift boosters in the history of space flight, with its first launch taking place in 1965 during the heady days of the space race. The rocket has undergone many modifications since that time. It has more than 400 launches under its belt keeping a success rate of nearly 90%. The current version, Proton M, is to all intents and purposes a modern launch vehicle, albeit incorporating many of the original features of the 1960’s design.

When it stands on the launch pad, it weights more than 700 tons, it is 58 meters tall, not strikingly elegant but certainly conveys an image of power and efficiency. The three-stage Proton version is used for launches into low Earth orbit such as the delivery flights for ISS elements, where it can deliver payloads of up to 22 tons.

The first stage has an empty mass of 31 tons and can take 419 tons of propellant. A marvel of engineering efficiency, its six rocket engines deliver a combined thrust of 1000 tons, more than enough to lift the 700 ton rocket off the ground. The stage is jettisoned after two minutes and falls back to the Earth, some distance Northeast of Baikonur.

For anything beyond low Earth orbit – such as for the ExoMars launch – the four stage Proton version is used. When the third stage is jettisoned, the stack will not have achieved orbital velocity yet. The spent third stage will keep flying, like a rock that has been thrown by a giant, until it finally enters the atmosphere and breaks up above the Pacific Ocean.

The fourth stage, called the Breeze M, is almost a spacecraft on its own, allowing access to a variety of orbits including Geostationary Transfer or Geosynchronous Orbits, escape trajectories and all types of lower orbits. It uses its propulsion and an independent control system to manage the complex orbital and escape sequence that ensues.

The fully fuelled Breeze-M weighs 22.3 tons, out of which almost 20 tons are propellant. On top of it sits the 4.3 ton ExoMars spacecraft, attached with an adapter to the stage. The main engine delivers a thrust of 2 tons, which is part of the reason why the escape sequence takes so long. 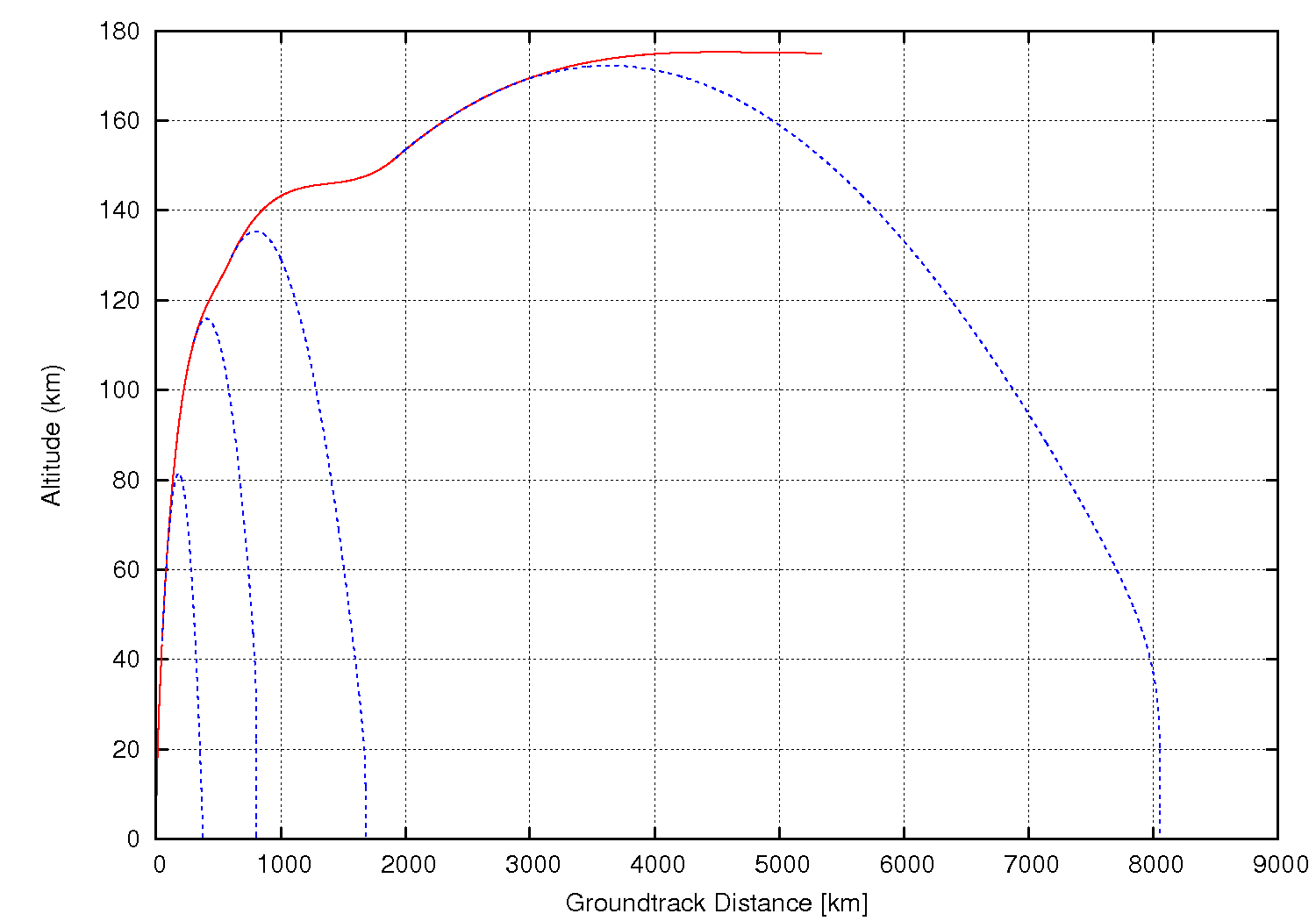 Fig.1: First comes the launch into the low, circular parking orbit,. This diagram shows how the rocket initially gains altitude very quickly, but does not cover much ground. Then, into the second-stage firing, it gains velocity and rapidly moves away from the launch site. The first stage, the fairing and the second stage fall back within less than 2000 km from Baikonur, but the third stage covers around 8000 km and splashes down in the Pacific Ocean. Credit: ESA/M. Khan

The Breeze M stage has to operate for around 6 minutes after the spent third stage has been jettisoned. At the cost of two tons of the propellant in the Breeze M tanks, insertion into a low circular Earth orbit is achieved. 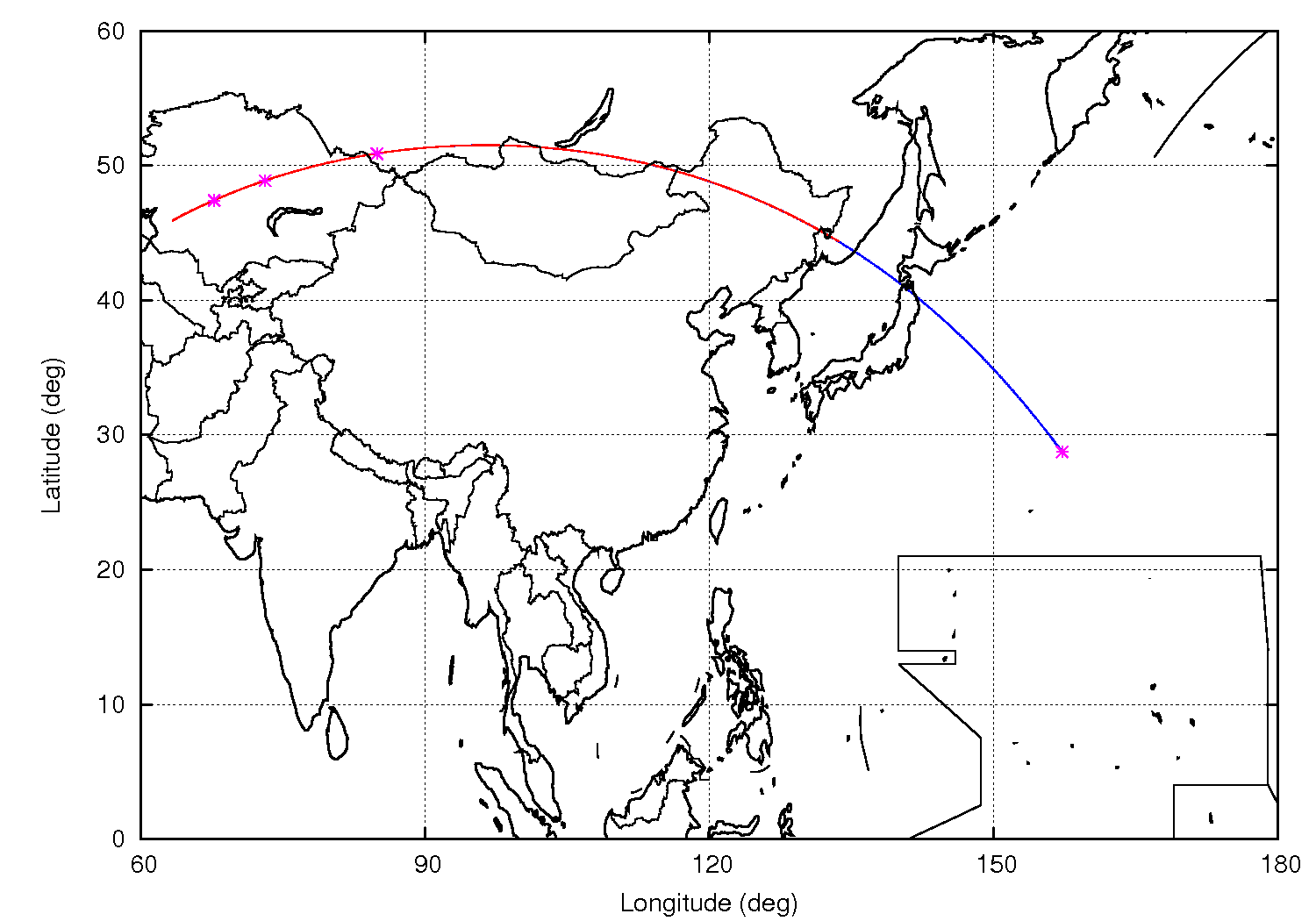 Fig 2: Again, the initial launch into low parking orbit. The launch inclination of 51.5 deg is chosen such that the groundtrack hugs the border to Mongolia and passes between the Japanese islands of Hokkaido and Honshuu. The Russian rocket launch strategies have been designed very painstakingly to minimize the risk to inhabited regions. Credit: ESA/M. Khan

We are now just 17 minutes after liftoff, already three massive rocket stages are gone and more than 600 tons of rocket fuel have been used. We are still only 175 km above the surface of the Earth, on a low orbit that is just outside the Earth atmosphere, at an inclination of 51.5 deg.

An additional boost of 4 km/s is still required for achieving Earth escape. All of it will have to come from the Breeze M – and that stage, which has just started, has already used up two tons of its propellant. Sound like “mission impossible”? Actually, it is anything but impossible. The remaining propellant is quite sufficient to speed up the stage and the attached ExoMars 2016 spacecraft by these 4 km/s.

Here is the solution.

The Breeze M stage was not specifically designed to launch something like ExoMars, but satellites into many different Earth orbits. With either of those, though the velocity increment is large, not all of it is required at the same place of the orbit. Which means that there is no point in using a very powerful rocket engine on the Breeze-M stage. You can use one that is moderately powerful, much lighter and cheaper. This engine can be switched on, then off, then after some time back on, then off again, until the final orbit is reached. It can be restarted 8 times in flight. 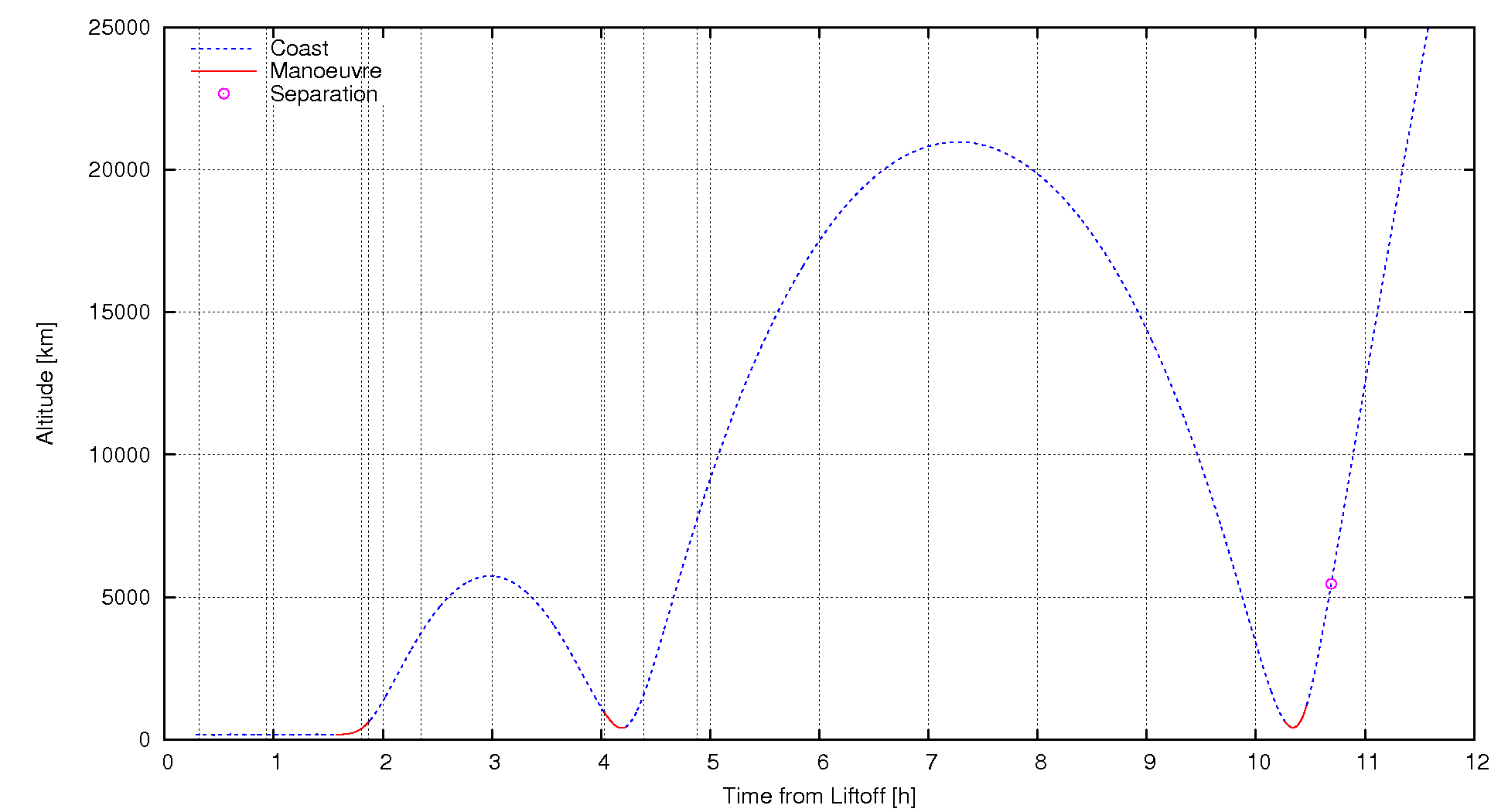 Fig. 3: Now follows the escape sequence proper. This diagram shows the altitude of the stack (Breeze-M and ExoMars) at any time in the escape sequence. Initially, the altitude is low, around 175 km. Then there is a Breeze-M manoeuvre that brings it into an eccentric orbit. This orbit is later further boosted. Finally comes the escape manoeuvre, after which ExoMars and the spent stage will climb away, never to return. Credit: ESA/M. Khan

With an interplanetary spacecraft such as ExoMars, it would in fact be desirable to provide the entire added boost in one blast. If we could do that, the escape sequence would last only an hour or so. We mentioned Mars Express and Venus Express, which were launched with Soyuz-Fregat rockets. That rocket and stage work only for small payloads. It could never launch ExoMars to Mars. We need the Proton M / Breeze M for that.

So the long and short of it is that although the Breeze M stage does carry sufficient propellant to inject ExoMars into its required Earth escape trajectory, its engine is not powerful enough to provide the required boost in one go. When there is a problem, engineers always find workarounds. That’s what they are educated for, that is what they have been doing since times immemorial.

In this case, the workaround is very simple. If we can’t impart the boost in one go, then how about three smaller steps? The starting boost will change the orbit quite a lot, from a circular orbit at 175 km altitude, to an eccentric orbit with its low point around 250 km, and the higher point, over 5.000 km.

The stack (Breeze M with ExoMars) will have to wait until it completes a whole revolution, once around the Earth, on that orbit. That takes more than two hours. The next burn of the Breeze M engine will make the parking orbit even more eccentric. It will now top out at more than 21.000 km. The larger an orbit, the longer its takes to complete. In this case, it takes 6 hours.

During that time, something ingenious takes place. The Russian engineers have designed the Breeze M stage with large toroidal tanks, shaped like a donut. These tanks contain the fuel used during the initial burn and subsequent manoeuvres of the escape sequence. When it is empty, it is designed to be jettisoned. This rids the Breeze M stage of 950 kilograms of useless dead mass.

Then comes the final manoeuvre. By this time, the stack is much lighter, as it will have used much of its fuel and of course shed the empty tank. By virtue of the reduced weight, the engine has become much more efficient, so it can insert the stack into the escape hyperbola, in once. 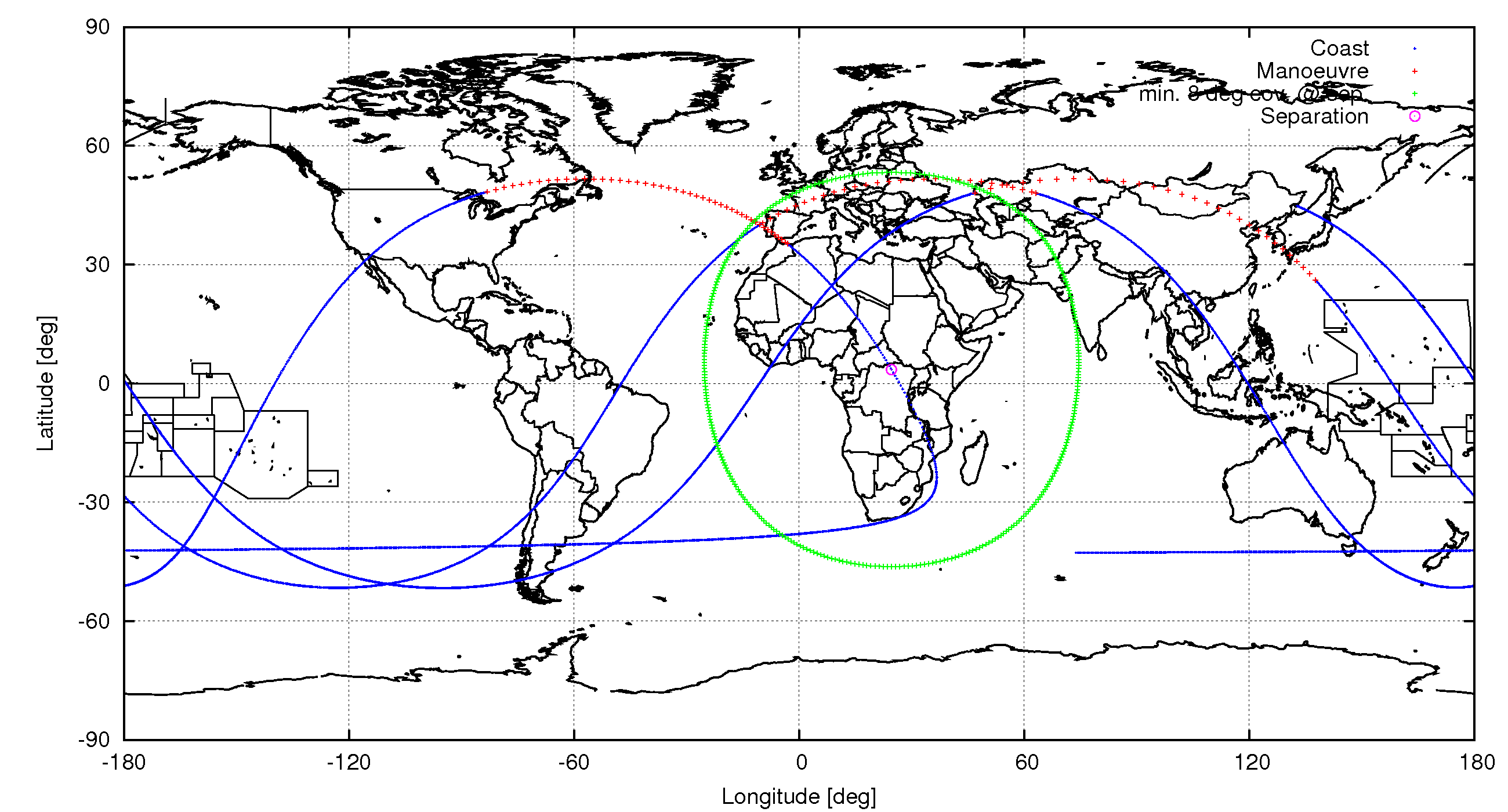 Fig. 4: Finally the ground track for the escape sequence. The initial parking orbit is achieved over far-Eastern Russia. Coast arcs, where nothing happens, are traced in blue, manoeuvre arcs, where the Breeze-M main engine is ignited, in red. Separation between the Breeze-M and the ExoMars spacecraft occurs above Africa (mauve dot). This will be in visibility of the Malindi Ground Station in Kenya. Credit: ESA/M. Khan

Some 15 minutes after end of the last manoeuvre,10 hours and 56 minutes after lift-off, the Breeze-M stage releases ExoMars. Proton M / Breeze M has completed its long escape sequence.

This will not quite be the end of its mission. Some avoidance manoeuvres are performed so that the stage can neither get close to ExoMars again nor hit the planet Mars, 7 months later. After, it switches itself off, putting the batteries and tanks into a safe mode. In fact, Breeze M is also a Mars-bound spaceship, although it will never get as close to Mars as ExoMars.