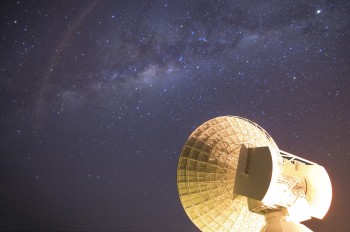 The first slice of selectees in the Estrack 40th anniversary audio contest via SoundCloud have just been announced (see playlist in this post).

This listing contains 12 tracks, ranked Nos. 42 to 31, and its publication begins our ‘countdown to the top’ as we publish the remaining 30 top-ranked submissions between now and 18 September.

A general note: We loved the submissions! You guys are amazing and we heard some really marvellous stuff created by people who are passionate, motivated and imaginative in their pursuit of music that reflects the central themes of exploration into our universe, technological excellence and the dreams of humanity’s journeys into space.

All the judges thoroughly enjoyed their task and on behalf of all of us, thank you!

Watch for the subsequent selectee and winner announcements, which should go live as follows:

It’s appropriate here that we provide some details on the judging, especially in light of the tremendous enthusiasm we’ve seen in SoundCloud for the contest and the obvious effort and skill that powered all the submissions.

We recruited 10 volunteer judges from our ESA colleagues (not only from the ESA Communication team; volunteers from the Mars Express and Integral mission control teams joined as well!). The judging team included several active amateur musicians plus others who have long experience playing/learning a number of instruments. Our judges also included a pair of hard-core music aficionados, one of whom has worked many years sourcing music and audio tracks for ESA communication productions and one who composes his own electronic music. We think we had a pretty solid line up of judges experienced across a wide range of genres and styles!

By 12:00 CEST on 31 August, the deadline, we had received 117 entries. A number of submissions were posted to the#Estrack40 contest Group in SoundCloud (actually, 9!) after the deadline, and these were not allowed into the competition. Normally, a few minutes late would have been no problem (hey, we all have busy lives), but since so many participants did submit on time, we felt it would be unfair to include any late submissions (you can hear them via #Estrack40 – not judged – they’re rather not bad!).

I’ll admit right up front: the judging had a bias toward any track that had been newly composed or newly uploaded to SoundCloud, and a bias away from tracks that had already been in SC – some, for a number of years! We felt that anyone who worked to create a piece just for the contest should be looked at a little more in depth and given a little more value than someone who simply tossed in an existing work; as a result, you’ll see as the top rankings are posted in the coming days, only two submissions that had been in SC since before the contest was announced on 30 July made it into the Top 42.

The ‘originals’ were divided up and assigned to the judges in batches of 8-12 tracks; each judge was asked to rank their batch top to bottom, and then the rankings were gathered and mashed up into one mega-XL spreadsheet. Some of the (very keen!) judges also listened to almost all of the originals, while three judges were assigned to listen to the non-original submissions and flag any that might merit inclusion in the top rankings.

From the mashed up XLS, and overall top-to-bottom raking of all tracks was created; the cut-off point for inclusion in the ‘selectees’ was having an original ranking of at least Top 5 on any judges’ individual list. This corresponded to 42, and that’s why we’re posting these in three slices between now and 18 Sep.

Note that some tracks, although musically not too bad, were disqualified, or ranked very low, because they failed to meet one or more basic conditions of the contest. These included entries with no note/explanation, entries that were copyright-protected, entries from an ineligible country and entries that were very, very long (all conditions were explained in the original invitation).

Note that some entries were ranked very low because they missed the theme challenge, or included too much in the way of back tracks, ambient sound, thematic content or images gathered from space agencies other than ESA (all the NASA & Pluto stuff was very nice, but we are ESA).

Finally, the rankings were further adjusted given that the top entry will be cut to some tracking station footage and selected as the new “Estrack theme music;” a number of entries were far too long or sombre or monotonous for this.

Aside from these details, however, and as mentioned above, we loved the submissions! Thanks again to everyone who took time to submit and we look forward to lots of fun hours listening to your stuff!