On 16 December, ESA’s hugely successful Venus Express mission came to an end after it exhausting its remaining propellant as of 28 November (see “Venus Express goes gently into the night“). 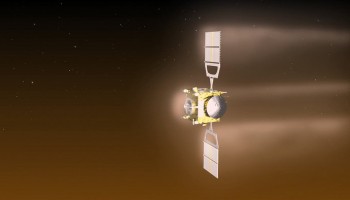 Visualisation of Venus Express during the aerobraking in 2014. ESA–C. Carreau

No more fuel means no more ability to control the spacecraft and keep the high-gain antenna (HGA) pointed toward Earth, which in turn means there is no way to upload telecommands nor receive telemetry (including the on-board housekeeping data).

Basically, Venus Express is ghosting along in its orbit, with the pericentre height (height of closest altitude above the surface) during each orbit steadily decaying due to gravity and natural perturbations.

But while no more science data can be gathered, and no more attempts to send commands will be made, the operations team at ESOC are able to continue monitoring radio signals from the spacecraft; they can ‘see’ the X-band carrier wave being transmitted from the spacecraft’s high-gain antenna despite the fact that it is not pointed at Earth, although this, too, is steadily dropping off.

The intrepid craft may be stuck in Sun-acquisition mode. This could mean it is maintaining a coarse pointing with the solar arrays and HGA pointed approximately toward the Sun, within perhaps 5 degrees or so.

But whether pointing toward the Sun or not, the HGA is not pointing toward our ground station on Earth, and as Venus and Earth move in their orbits, this off-Earth pointing (see ‘Sun-spacecraft-Earth angle’ in the chart) is becoming larger. This means that the strength of the received carrier signal is steadily declining.

“On New Year’s day, we saw a weak but detectable signal level and could lock onto it for most of the almost-5-hour tracking pass using the Cebreros deep-space tracking station,” says Rick Blake, Venus Express spacecraft operations engineer at ESOC.

“But on 7 January, we only got carrier lock on a more weakened signal for just five percent of the pass; on 8 January, we were back to a good lock for most of the pass, so it’s definitely an unpredictable situation.”

“We plan to continue monitoring the signal level in January until we see it has disappeared for good,” says Blake.

In an earlier email, Håkan Svedhem, ESA’s Venus Express project scientist, said he expected the pericentre altitude to drop to about 130km around 12 January and 120km around 20 January.

“My personal guess is that the spacecraft will start breaking up soon after that.”

This will be unseen by any human, and it appears that we’ll never know when it actually happens.

“It will be destroyed in the atmosphere most likely toward the end of January or early February,” says Patrick Martin, ESA’s Venus Express mission manager.

But while the spacecraft will burn up in the dense Venusian atmosphere – experiencing a lonely and poignant end – the science and operations teams on Earth will begin work on the important post-operations phase.

This will ensure that the vital science and flight data recorded during eight years of exploring Venus are available to current and future researchers, making a fitting legacy for such a successful mission.