Today’s blog post was contributed by Colin Wilson at the Dept. of Atmospheric, Oceanic and Planetary Physics, Oxford University, with inputs from the operations team at ESOC. Colin is Venus Express Science operations co-ordinator. 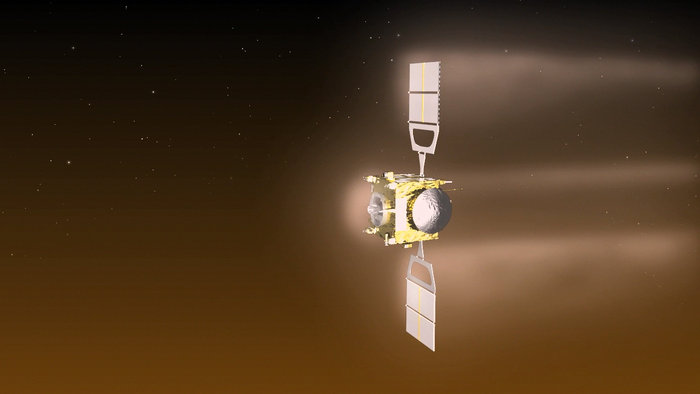 Visualisation of Venus Express during the aerobraking manoeuvre, which will see the spacecraft orbiting Venus at an altitude of around 130 km from 18 June to 11 July. cREDIT: ESA–C. Carreau

As the aerobraking campaign – in which Venus express spends part of each orbit deep in the atmosphere – continues, the altitude of the spacecraft has been decreasing naturally due to gravitational forces. Its orbit is now such that its altitude at pericentre passage – the point of lowest approach over the planet’s surface – is well below 140 km – much lower than ever before.

This means that the spacecraft is now so low that it experiences significant drag due to the atmosphere; this drag can be measured by the spacecraft accelerometers, giving measurements of atmospheric density. We are currently experiencing dynamic pressures of 0.13 N/m^2, predicted to grow to 0.20 N/m^2 as the pericentre altitude decays further.

However, we think Venus Express can handle significantly higher atmospheric densities, and we want to probe the atmosphere even lower and discover how the spacecraft performs at higher dynamic pressures, ranging as high as 0.4 to 0.6 N/m^2.

Therefore, the mission operations team at ESOC used the spacecraft’s thrusters today to lower the pericentre altitude by 2.8 km; this pericentre-lowering manoeuvre (think of it as a ‘push-down’ manoeuvre) was done by firing the thrusters as Venus Express passed through apocentre. The thruster burn took place at 12:42 CEST (10:42 UTC), and the next – and unprecedented low – pericentre pass will now occur at 00:31 CEST on 24 June (22:31 UTC on 23.06). The manoeuvre should bring pressures to 0.4 N/m^2 by the mid-point of the aerobraking plateau on 29 June.

We are in unknown territory, and we’re going in deeper.

Currently, the lowest altitude experienced is on the daylit side of the planet. But next week, it will cross over onto the nightside of the planet, when we expect atmospheric densities to drop significantly (but by an unknown amount). At that time, we may be able to perform another pull-down manoeuvre.

As mentioned, we can now definitely see drag due to the atmosphere in our accelerometer data; the chart below shows the accelerometer trace measured during one orbit.

In addition to showing a peak in the accelerations when the spacecraft reaches its minimum altitude, small oscillations can be seen. These are due to variations in the atmospheric density along the flight path. Scientists are looking forward to comparing the properties of these waves with those observed lower done using radio occultation and using VEX’ camera