Today kicks off a crucial series of Rosetta thruster burns (formally, orbit correction manoeuvres or OCM) designed to bring the spacecraft onto the proper trajectory to arrive at the comet on 6 August. The first burn is set to take place at 17:30 UTC (19:30 CEST).

Rosetta is just under 2 million km from its target comet, 67P, and is moving at a speed with respect to the comet (relative velocity, or ‘rel-v’) of 775.1 metres/second (m/s).

If the mission control team did nothing more, Rosetta and comet 67P would pass by each other at a distance of some 50 000 km on 4 June (given the current Rosetta-comet relative distance and speed) and, well, that would be pretty dull!

We’ll provide more details on the (complex) process of lining up the two trajectories later; today, let’s take a look at the burns themselves and the thrusters that are going to do all the hot work in the coming weeks.

Rosetta and the comet are moving on different trajectories, such that – absent any burns – they would pass by each other like two ships in the night.

“By doing the manoeuvres, we continuously change Rosetta’s speed so that, on 6 August, they have the same speed and position,” says Rosetta flight director Andrea Accomazzo.

You’ll see the term ‘delta-v’ a lot in our blog; it refers to the thruster performance and is measured in metres/second; i.e. by how much should the thruster burn change the speed of Rosetta with respect to the comet.

“The orbit correction manoeuvre this week is planned to achieve a delta-v of 20 m/s,” says Armelle Hubault, a spacecraft operations engineer on the Rosetta team.

“It is a small ‘test’ manoeuvre, done to make sure that all systems work as expected prior to starting the much larger manoeuvres later on. It will reduce our rel-v from 775 m/s to 755 m/s.”

The Rosetta team have planned a series of eight thruster burns through to the end of July, one every two weeks for the first four burns, then weekly thereafter.

This cycle enables the teams working on Rosetta (operations, flight dynamics, science, etc.) to have a predictable work schedule, and the final weekly cycle allows sufficient time to assess the performance of the burn, determine the actual resulting orbit and then implement or replan the succeeding burn.

In the nominal case, i.e., when all the burns provide the expected results, here’s the schedule:

There are two more burns in the series: one on 3 August, which should bend Rosetta’s trajectory from a 200-km miss distance to 70 km and reduce the rel-v to a stately 1 m/second, and one on 6 August, which is the orbit insertion manoeuvre itself; we’ll talk about those in a later blog post.

The Rosetta operations team at ESOC have stressed on a number of occasions that the burns starting today are crucial. This is not only because if, as mentioned, no burns happen, we’ll miss the comet.

It’s also because the burns have to happen more or less on schedule, and this requirement gets progressively tighter. At the start of the series, we have a relatively wide window in which to ensure that each burn happens – i.e. a number of days. As we get closer to arrival, the windows become narrower with each burn.

If there is any problem that prevents the burn from happening on schedule as intended, the teams will have to work quickly to identify, troubleshoot and fix the problem to get back on schedule.

Any on-board software glitch, any unexpected safe mode (when the spacecraft reboots itself and then waits for fresh instructions from ESOC while doing nothing) or a communication problem could delay any of the burns.

Rosetta’s working well, and no one expects any problems, but remember that all of the orbiter’s thrusters are being used at lower pressure than originally planned because of a Reaction Control System leak that occurred in September 2006.

Rosetta is equipped with 24 bi-propellant 10-Newton thrusters. Over half the launch weight of the entire spacecraft was taken up by propellant (just over 1700 kg).

These thrusters are extremely robust and use mature technology provided by European industry (EADS Space & Defence, formerly, Astrium); they are designed for precision attitude, trajectory and orbit control of large satellites and deep-space probes. (See links here and here for technical details on the thrusters.)

Roughly speaking, on Earth’s surface, 10 N of thrust is equivalent to weight of 1 kg of mass. 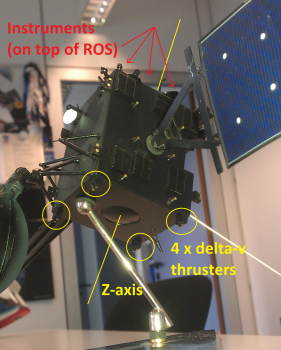 For delta-v manoeuvres, Rosetta will use only four thrusters, called the axial thrusters, because they are aligned with the spacecraft’s Z-axis (i.e. along the same direction in which the instruments are pointing, although the thrusters are mounted on the other side of the main body).

Andrea adds that: “These four thrusters are also used to control the spacecraft attitude around the two directions – X and Y – running perpendicular to the Z-axis thrust direction.”

“Another four thrusters are uses to control the spacecraft’s attitude around the Z-direction; these will have a negligible contribution to the delta-v manoeuvres due to their orientation and very low activation frequency.”

(You can read more about the Rosetta propulsion system here.)

There’s a video at the end of this post showing how a bi-propellant thruster appears in operation; note that this video shows the much more powerful 220 N thruster that is used on ESA’s ATV cargo vessel, but the technology on Rosetta is the more or less the same.