We received a nice note last week from ESA’s Jürgen Volpp, the Spacecraft Operations Manager (SOM) for the Cluster mission at ESOC.

Cluster is probably the most successful scientific mission you’ve never heard of! Launched in July and August 2000 in two dual launches, the mission comprises a fleet of four satellites orbiting in tight formation to investigate the small-scale structure of Earth’s plasma environment. 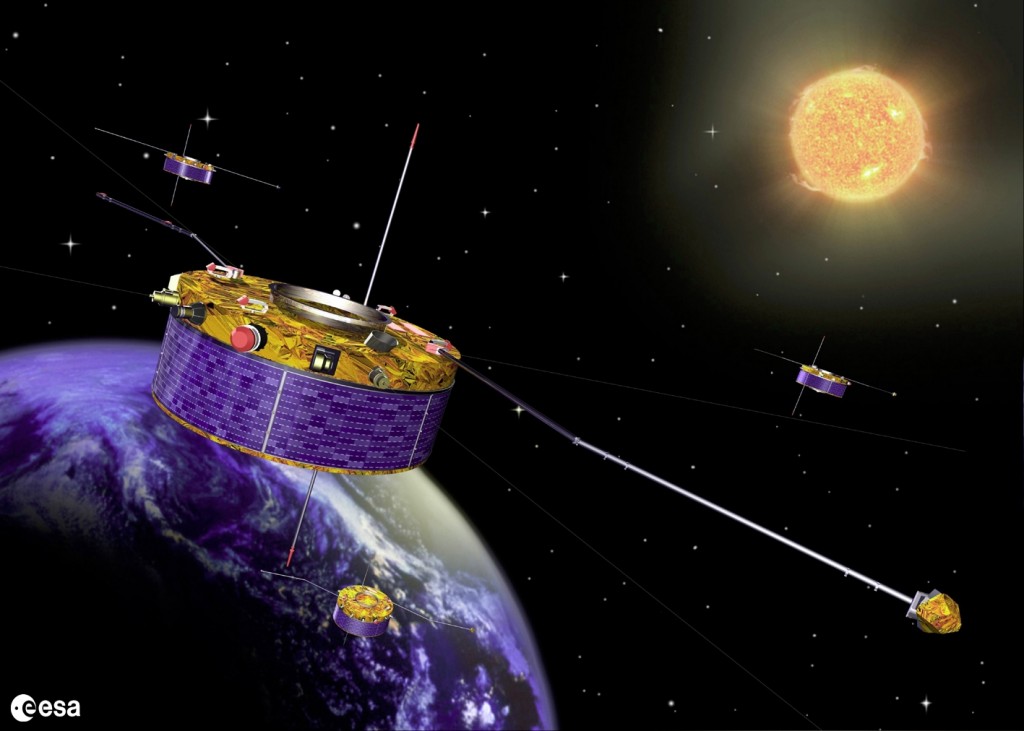 The four sats – Cluster 1 (Rumba), Cluster 2 (Salsa), Cluster 3 (Samba) and Cluster 4 (Tango) – have been collecting the most detailed data yet on small-scale changes in near-Earth space and the interaction between the charged particles of the solar wind and Earth’s atmosphere, enabling scientists to build a three-dimensional model of the magnetosphere and to better understand the processes taking place inside it.

The crucial activity here at ESA’s ESOC Control Centre with the Cluster quartet is, of course, flight control and navigation.

The experts in flight dynamics work hard to calculate and determine the four orbits, while the flight control team flies the individual satellites; there are actually four main console workstations in the Cluster Dedicated Control Room, one for each satellite.

I asked Detlef Sieg, the Cluster Flight Dynamics Routine Operations Manager at ESOC, to provide a bit of background behind this incredible ‘dance performance’ in the skies. Click on the ‘Continue reading’ link below for the full article.

(And for more background on ESA’s Flight Dynamics team, access Stay on Track.)

What’s the reason for this tight approach?

The Cluster formation was originally designed for a two-year mission. Seventy-five per cent of the propellant was used during the critical launch and early orbit phase (LEOP) back in 2000; another 20% was used during the original mission period and a first extension. To make further mission extensions possible, a significant ‘formation change’ strategy was adopted in 2006. Manoeuvres had to be restricted to perform cheap (in terms of fuel usage), along-track phase shifts only (i.e. after a pair of manoeuvres each satellite is on the same trajectory as before but is delayed or advanced in time1).

To keep as much flexibility as possible, two of the satellites (C3 and C4) were put into almost identical orbits. This left the possibility of varying their separation distance, which is typically between 10 and 10000 km.

The other two satellites (C1 and C2) were put into orbital planes suitable for supporting large ‘tetrahedra’ configurations  in 2006 and 2007.

Since then the evolution of the shape and orientation of the orbital planes has been left to the natural perturbations by the Moon and Sun.

So why is this manoeuvring being done now?

As the orbits of the two pairs are slightly different, the same applies to their relative natural evolution. The crossing between the C1 and the C3/C4 orbital planes evolved such that the radial separation at the crossing point has been continuously reducing – and now even crosses through zero. This gives a unique opportunity to have the three satellites close together at lower altitudes. The Cluster Science Operations Working Group recommended having an inner magnetosphere configuration with 10 to 100 km separation at the magnetic equator.

Who is involved in this close formation flying activity?

The detailed implementation was left to ESOC’s Flight Dynamics team{link}; the relative phasing of the satellites was optimized such that the separation between C1 and C3/C4 is kept below 100 km at the equator crossing for as many orbits as possible.

How long will the new orbital formation be used?

The formation has been in place since 15 July and will run until 1 November 2013 (Recording of science data was interrupted by the eclipse season from 9-18 August 2013.)

What are some of the difficulties/challenges involved?

The main challenge was to exclude any collision risk and to avoid manoeuvres during the formation time-frame, as these would interrupt instrument operations.

The difficulty is that the relative along-track separation between C1 and C3/C4 can be established only with an accuracy of about 10 km for a two-month period and it is quite unstable around perigee (it changes up to 40km from one orbit to the next and jumps forward and backward).

Finally the radial separation could be planned such that its minimum remains above 2km during all orbits.

Note1: Detlef adds: The term ‘ground track’ here would not be not correct. If the satellites are shifted along-track then they arrive at the same trajectory location, for example, 1 hour earlier or later. In the meantime the Earth rotates underneath and thus the Earth-fixed ground track is shifted in latitude by 15 degrees East or West.