When Gaia is released from the Fregat upper stage of its Soyuz launcher, ESA’s mission control team at ESOC in Darmstadt will take over command and – from then on until the end of the mission (planned to be at least 5.5 years) – look after all operations. However, like the spacecraft itself, operation of the mission start a long time before the launch.

Gaia is an ambitious mission to chart a three-dimensional map of our Galaxy, the Milky Way, in the process revealing the composition, formation and evolution of the Galaxy. Credit: ESA–D. Ducros, 2013

Gaia is a complex spacecraft, using the most-up-to-date space technology in many areas to achieve its challenging mission objectives (see ‘Charting the heavens with Gaia‘). Mission control must understand the spacecraft inside and out and prepare all ground equipment and software, so that the data can be delivered to ground. The data are then forwarded onto the scientists, to enable the ‘billion star surveyor’ to chart the galaxy and start making the large swath of discoveries that has given it the nickname, ‘the discovery machine’. Notable technological firsts on the Gaia spacecraft also imply advances on the ground, such as the highly accurate timing, orbit determination and novel data downlinking schemes that have to be performed while the craft orbits 1.5 million km from Earth at L2.

[See today’s great report from ESOC’s Markus Landgraf on what, exactly, is an ‘ell-two’ 🙂 – Ed.]

The ground stations, mission control computer systems and software are all tailored from existing infrastructure to meet the Gaia mission objectives, and this activity starts years before the launch. In addition to the equipment and software, the Flight Control Team has been progressively built up, consisting of the operations engineers who write the procedures to control the spacecraft in flight and who will then serve on the team that flies the mission. These procedures allow the team to perform checks on engineering telemetry and send telecommands to configure, active and control all the units, modes and software on board.

To be sure all these systems work from the second the first in-space signal from Gaia is detected, many tests are performed. 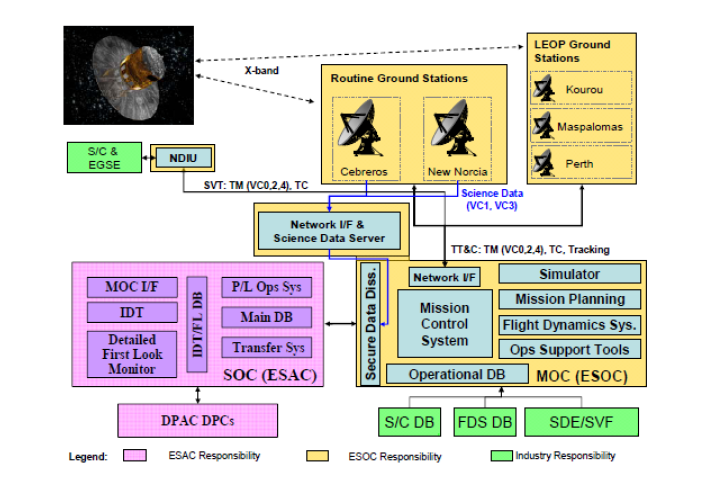 The backbone of these tests are the System Validation Tests (SVTs), which are performed in the years leading up to launch, connecting the ground operations system at ESOC in Darmstadt to the spacecraft at various stages in its assembly in Toulouse (from just the service module early on, to the complete spacecraft towards the end).

A representative Avionics Model, a non-flying copy of the original and containing real spacecraft units, is also used.

The first of these SVTs was performed almost four years ago, lasting two days and testing the basic procedures and commanding, such as switching spacecraft units on and off.

Over time, the SVTs have increased in complexity and duration, as the assembly of the spacecraft in Toulouse was completed. The testing is exhaustive, starting with basic unit testing, progressing all the way up to the most complex attitude and control modes, highly accurate timing, and switching on of the full payload and focal plane assembly.

An important factor to cover, in addition to ensuring that the ground and space software and protocols work well, is testing the procedures we must execute in case something goes wrong. Gaia is protected on-board against failure by autonomous software that either ‘fails operational’ for minor failures or ‘fails safe’ in case of more serious failures or failures that the on-board autonomy cannot safely isolate while continuing operations.

In such situations, engineers on the ground must intervene, understand the problem, restore redundancy and bring the spacecraft back up to its full scientific operational mode. These contingency recovery procedures are also validated on ground.

On 5 and 6 September 2013, the last of these planned tests will be executed, a two-day test that focuses on telescope and payload commissioning procedures. This will bring to an end an SVT campaign of nine tests, totalling 39 days (close to 500 hours) of intensive testing with the spacecraft models.

In this period over 1000 procedure executions have been logged and close to 500,000 telecommands sent!

After this campaign, with the ground systems fully validated, the focus of the operations preparation will be on the ongoing simulations campaign. In this the Mission Control Team sits together in the Main Control Room at ESOC, practising all critical operations. This is done under nominal situations, and also when anomalies (sometimes many!) have been injected into the scenario so as to ensure the team is ready and prepared even if things go wrong.