The way back to Earth 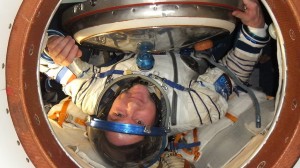 Having lived and worked on the International Space Station for 191 days, spanning both Expeditions 30 and 31, ESA astronaut André Kuipers and his crewmates Oleg Kononenko and Don Pettit are preparing to return Earth on Sunday morning.

After entering the Soyuz TMA-03M spacecraft and closing the hatches at 03:40 CEST, the Soyuz is set to undock from the Station at 06:53 CEST on Sunday morning. A couple of hours later at 09:19 CEST, a 4 minute 25 second deorbit burn will start the Soyuz on it’s journey towards Earth’s atmosphere. 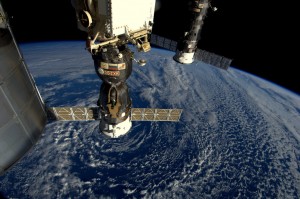 Shortly before entering the atmosphere, at 09:48 CEST, the Soyuz spacecraft separates into its three parts. The orbital and service modules burn up on reentry in the denser layers of Earth’s atmosphere.

The descent module rotates, placing the strongest parts of the heatshield towards the reentry direction, so that it can absorb most of the heat caused by friction. Reentry occurs at an altitude of 101.8 kilometres. The speed is reduced dramatically and the crew is pushed back into their seats by a force of 4–5 g. This is equivalent to four to five times their own body weight.

The parachutes are deployed and the Soyuz’s shock-absorbing seats soften the landing, together with retro-rockets firing just 2 seconds before touchdown at 10:15:02 CEST. The descent module touches down on Earth at a speed of less than 2 m/s, or around 5km/h.

After landing, the crew will deploy a communication antenna, so that the rescue teams can pinpoint their precise location. The landing site is located 217 km SE of the Kazakh city of Dzhezkazgan. Once rescued André and Don will be taken directly back to Houston from Baikonur, for rehabilitation and post-flight body data collection. Oleg will return to Star City in Moscow.

Unlike the 2 days between launch and docking with the ISS, reentry and landing on the Steppes of Kazakhstan is a relatively quick procedure, taking no longer than three and a half hours from undocking to touchdown.