Radiation on the ISS: mapping in 3D & testing materials for future exploration 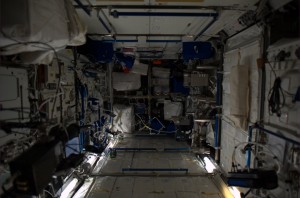 For DOSIS 3D a number of active and passive radiation detectors are used to conduct a three-dimensional survey of the radiation environment in all segments of the ISS, mapping the nature and levels of the radiation field within the Station. Space radiation exposure is always a concern for the crew, and must be protected against.

The radiation dose inside the European Columbus laboratory is monitored in 11 different positions by passive dosimeters. The passive dosimeters are about the size of a pack of playing cards and are attached to the side walls of Columbus with velcro. They are distributed all around so that the readings can reveal radiation gradients in X, Y and Z directions; together they provide a three-dimensional map of the radiation environment within Columbus.

Passive detectors cannot be switched on or off, they record all the time. On Earth they don’t measure much because our terrestrial radiation levels are modest. Simply put: real recording starts immediately after the detectors reach Low Earth Orbit (LEO), and stops once the detectors are returned to Earth. The passive detectors tell you how much radiation has been seen (‘absorbed’) in total during the exposure period – i.e. throughout the period that they are in space.

The passive detectors on the ISS are replaced for each increment. André’s recent task was to remove the old set from the Columbus walls, pack them for return to Earth, and to then stick a new set onto the walls. This allows a comparison of possible changes in radiation between different increments.

The passive recordings are accompanied by active recordings. Active recording demands a sophisticated instrument with power, telecommanding and telemetry. In DOSIS-3D two active detectors, together in one location, support the passive dosimetry. Using active dosimetry the fluctuations of radiation levels are measured over time. 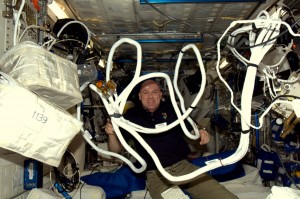 The radiation environment inside the ISS is much milder than outside the ISS. That is because of the shielding effects from the complete structure of the ISS. The ISS was never built to provide radiation shielding as such, it was built as a mechanical structure that, almost as a side-effect, offered shielding to the crew.

In LEO the shielding provided by the ISS is deemed to be enough to provide protection for the crew, but in the future, on long-duration missions into deep space, further precautions must be taken. The difficulty here is that superior shielding almost automatically means a higher mass. Therefore research is being done to find the best compromise between mass and shielding efficiency.

In ALTEA-SHIELD three active radiation detectors are used. One is for reference. The other two are covered with ’tiles’ made of shielding materials in two different thicknesses (thick or thin). By comparing how much radiation is seen by the reference detector, by the ‘thin tile’ detector and by the ‘thick tile’ detector, the scientists hope to quantify the effectiveness of the thickness of the shielding tiles.

Last week André installed the first set of tiles. When this part of the experiment is finished (will be after André has returned to Earth on 1 July, so will be performed by another ISS crewmember), the tiles will be replaced by a fresh set made of a different material. Overall the results will tell the scientists which of the two materials works best, and what the effect is of different thicknesses (thick or thin).