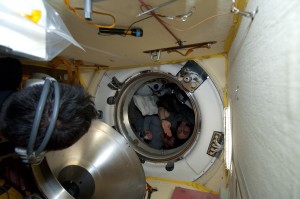 André Kuipers sent a new blog entry reflecting on the undocking of the Soyuz TMA-22 last Friday. On board the departing spacecraft were NASA astronaut Dan Burbank and Russian cosmonauts Anton Shkaplerov and Anatoli Ivanishin, who safely landed in the Kazakh Steppe some three and a half hours after the undocking. He writes:

“Yesterday Dan, Anton and Anatoli left. We worked all night. I drew blood from Don and myself and collected saliva samples to be sent back on the the Soyuz to the scientists on Earth. Around six o’clock in the morning Western European time we said our goodbyes. At ten to seven we closed the hatch to their Soyuz. At exactly 10:18:30 they detached from the ISS to travel back to Earth. I heard the latches release and felt a small shock when springs pushed the Soyuz away. A little later I saw the Soyuz descend on its way to to a safe landing in the Kazakh Steppe, a little before two o’clock in the afternoon.