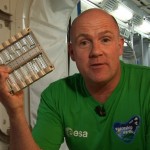 Children in four European cities will talk to ESA astronaut André Kuipers live on the International Space Station later today to discuss two space experiments they have performed together.

The students aged 10–14 years have performed their own identical experiments to André in space to discover how convection and foams differ under the influence of gravity compared to the Station’s weightless environment.

This PromISSe mission education activity is part of the Spaceship Earth programme, run as Ruimteschip Aarde in the Netherlands.