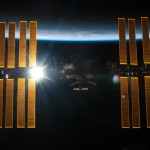 The Russian 46P Progress cargo spacecraft undocked from the International Space Station earlier today. The Progress departed from the ISS at 13:04 CEST (11:04 UT) as scheduled and is set for a destructive deorbit on 28 April.

The Russian Progress spacecraft is an automated, unmanned version of the Soyuz spacecraft used to launch the ISS crew. Like Europe’s Automated Transfer Vehicle, the Progress brings supplies such as food, clothes, water and fuel to the Station. After unloading the new supplies, the crew fills the Progress with trash items, waste water and unused equipment. After undocking, the Progress and it’s contents burn up during reentry in Earth’s atmosphere.