ESA astronaut Luca Parmitano and NASA astronaut Andrew Morgan are performing the fourth in a series of complex spacewalks to maintain the cosmic ray detecting Alpha Magnetic Spectrometer AMS-02 today – 25 January 2020. It is the third spacewalk of 2020, the sixth for Luca and the ninth spacewalk for Expedition 61 crew – the most ever performed during a single expedition.

After five hours and two minutes outside the Space Station today, Luca will also hold the European record for the most cumulative spacewalking time. This is currently held by ESA astronaut and Swedish physicist Christer Fugelsang who has performed five spacewalks or EVA.

The below video provides an overview of tasks ahead of Drew and Luca during this fourth and final EVA for AMS.

You can watch the entire spacewalk live on ESA Web TV and stay tuned to @esaspaceflight on Twitter for regular updates. Both Luca and Drew are wearing helmet cameras. Luca is helmet cam 18 while Drew is helmet cam 20.

Preparing for a spacewalk

Before our spacewalkers step out, they need to prepare their bodies and their suits. This infographic provides a nice little guide to the final four steps to a spacewalk.

A spacewalk officially begins when the spacewalkers switch their spacesuits over to internal battery power. Today’s spacewalk began at 13:04 CET (11:04 GMT).

Drew and Luca are supported by NASA astronauts Jessica Meir and Christina Koch. Christina will operate the robotic arm, transporting Drew to the AMS worksite.

Here the pair are shown closing the hatch between the crew lock and equipment lock enabling Luca and Drew to begin depressurisation – a process that takes about 30 minutes.

Upon first closure today a strap from a bag got caught in the hatch. This meant it was not completely airtight. Once the issue was recognised, the crew lock section was repressurised, the hatch was reopened and the strap was removed enabling the hatch to be securely fastened and depressurisation to begin once more.

Here we see Luca’s legs as he emerges from the airlock. As EV1, Drew Morgan exited the airlock first today, followed by Luca. Drew wears the spacesuit with red stripes, while Luca’s spacesuit is completely white.

One of the first tasks for Drew today is to connect to the Canadarm2 robotic arm, which will be used to transport him to the AMS worksite. Christina Koch will operate this from inside the Station.

Luca will make his way manually to the worksite as he works to prepare tools and the site for Drew’s arrival.

The eight leak checks that Luca and Drew perform today will determine whether the spacewalk series has been a successful, enabling teams on the ground to restart the cosmic ray detector AMS-02. If they get time, they may also perform what are known as get-ahead tasks.

The acronym of today is VLI. This stands for visual leak indicator.

A slight leak was identified on the first two tubes our spacewalkers performed leak checks on. Luca will continue running through procedures to check the tubes to follow.

The final tube checked by Luca worksite is in good condition. No further leaks have been found. The pair will recheck the leaking tube one hour from the time Luca tightened the connection to ensure this is sealed securely.

There are three options upon rechecking the tube: no leak – good to go, slight leak – tighten again and restart the clock, or big leak – reevaluate next steps with crews on the ground.

Luca identified a leak upon rechecking tube number five. Upon instruction from the ground he retightened the connection, restarting the dwell clock. He will recheck this tube in an hour from the time it was retightened. If a leak is still present, he will work to install a jumper that will work around this leaking connection. Just in case this is necessary, Luca returned to the Space Station airlock to pick up contingency bags.

Luca rechecked tube number five, 17 minutes earlier than scheduled. This third check revealed no leak, indicating that work to tighten the connection has been successful. The spacewalk is back on schedule. Next step is to apply the MLI tent, closing out and protecting the site.

Luca also opened the accumulator valve which will pressurise the new system, ensuring all cooling lines are holding pressure as expected for the resumption of AMS-02.

The team at the AMS payload operations control centre are all smiles as the instrument’s new pump system is declared leak-free.

👏 Congratulations @astro_luca and @AstroDrewMorgan, the AMS pump system is now leak tight. The #SpacewalkForAMS series is a success!

Things are progressing nicely. Next steps for@astro_luca and @AstroDrewMorgan include installing a mud flap between the new pump and vertical support beam (VSB) before removing a cover known as a shower cap to expose the new radiator system. At this point, Luca is attached to the end of the Canadarm2 robotic arm operated by Christina from inside the Station. 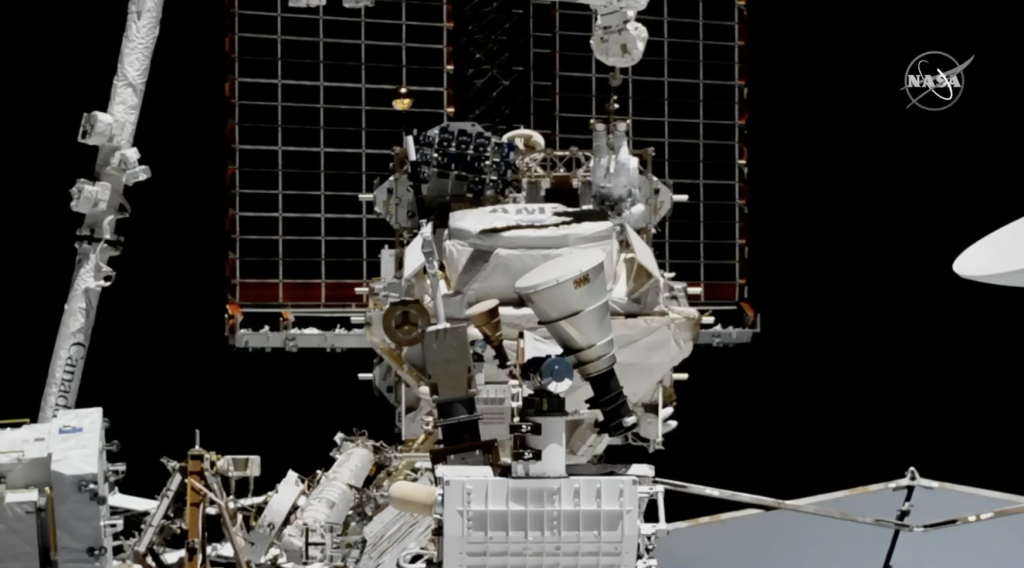 Following the completion of all AMS tasks, Luca and Drew are off to replace lens caps that have fogged up on the Space Station’s external high definition cameras.

The end is reminiscent of the beginning 🦵🦵 As EV2, @astro_luca reenters the airlock first followed by @AstroDrewMorgan. pic.twitter.com/i8ka6LrolV

Finishing with a fist bump 🤜🤛 @Astro_Jessica opens the hatch between the crew lock and equipment lock, welcoming the weary spacewalkers home. pic.twitter.com/dF6PwFNjZZ