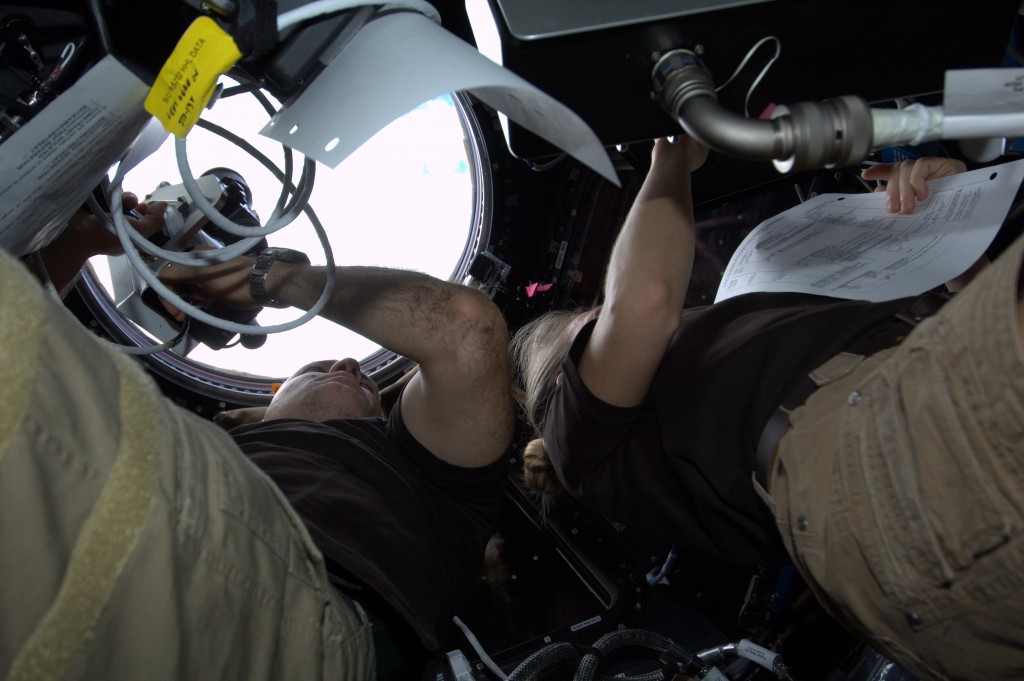 It is dark outside, an impenetrable blackness surrounds us, so we are probably flying over an ocean as. I look around the Cupola and realise that the lights around me and the surreal blue twilight outside would probably drown-out the faint lights of the big cities anyway. Cygnus is flying below us, invisible in the darkness that surrounds it, but Karen and I will try to catch a glimpse of the spacecraft anyway: I know that dawn is not far off, and I have been waiting a week to see the supply ship.

I might have lost my eagle-eyes that I developed as a pilot, when I was trained to recognise aircraft from kilometres away, but luck did not abandon me. As the first rays of sunlight tear through the shadows, colouring the horizon gold, ochre and blue, an alien glow attracts my attention. Standing out bright and silvery in the background Cygnus catches the light and reflects it in its glorious, technological splendour.

“Tally,” I say to Karen, trying to contain my excitement, and point at Cupola’s centre window. Karen nods her head, calmly confirming my sighting and informs Houston via radio. I know dozens of people there are waiting for developments with the same excitement that I feel.

Karen is responsible today for all communications relating to the small cargo ship. The spaceship is approaching fast as the data flowing over our monitors confirms. My task for the next hour will be to monitor Cygnus’ position sensors and compare it to the data I get from a portable laser that calculates the spacecraft’s distance and speed. Its speed should be as constant as possible as I aim the laser at the same spot on the spacecraft. I am rewarded by a series of green lights – the control software confirms that the data from my laser match the data from the sensors on Cygnus.

The Cupola does not offer much space, and it is now even more crowded. In addition to Karen and me, we have two computers for the procedures and for the control software. We also have the Cygnus control panel which is the same my colleague Chris Cassidy used for the HTV berthing. A number of cameras document this first mission of Cygnus as well as some snacks fill the module.

The spacecraft’s performance is impeccable, when it is 230 meters away, Karen runs a test that the spacecraft needs to complete for its maiden flight: she commands a retreat and the Cygnus slows down, stops, and backs up to a distance of 250 meters. When Houston tells us that Cygnus has resumed its approach, Karen prepares a second test, again at 230 meters. She sends the command to hold. The spacecraft obediently stops and waits for new commands.

At this distance, the spacecraft’s ‘tail’, the service module with the computers and motors, appears white. Its ‘wings’, the two solar panels shine as chrome. Its navigation lights are clearly visible, two white strobes in the centre with a red and green light on either side, the colours of the Italian flag floating in space. Cygnus’ pressurised module is built in Italy and I smile at the thought of this unintentional tribute to my country.

In a few minutes everything is ready for the approach that will bring Cygnus to thirty metres and then to ten meters. At that point the spacecraft’s interface will be only five metres away from the robotic Canadarm2. My job is to bridge that distance and then catch Cygnus. I prepared during long simulation sessions on Earth and repeated the training on the Station in dozens of virtual situations, going through the simplest of scenarios to the most extreme. 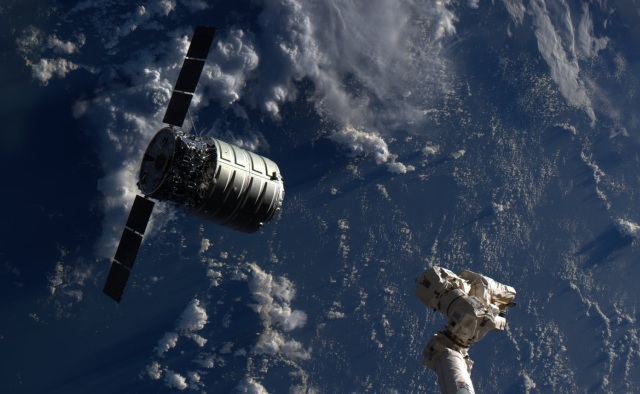 The spacecraft now fills our view, and we appreciate its size. It is smaller than HTV, but no less impressive: when it stabilises in the capture area I observe its slow and control movement thanks to the camera mounted on the tip of the robotic arm ­- the same one that will allow me to move the spacecraft manually until it berths with the Station.

Houston gives us the go-ahead to start capture. I follow the spacecraft by looking on the monitors as I try to find the best moment to capture Cygnus: I have to wait until it is particularly stable. In a state of automation from practice sessions during my training I start my approach. “I am going to” I say to Karen, who immediately responds “Copy”. The robotic arm reacts to my commands and within seconds we are about three and a half meters away. The dialogue between Karen and myself that follows gives me a sense of déjà vu as we have practised so many times in training..

Karen waits to see the characteristics of free drift on her monitor, and after a few seconds she confirms: “Free drift.”

I get the robotic arm to within a meter and a half after spending some time pushing the it forward. My controls are minimal, spending more time thinking than performing: the Canadarm2 is almost 20 meters long and abrupt moves can cause unwanted oscillations.

Karen tells me the distance from my target based on marker ‘pins’ on the Canadarm: “Two pins away.”

“I am go,” I say , because my target is perfectly aligned with the reference data on my monitor.

“Concur,” Karen replies, confirming my thoughts and almost immediately adds: “over the pin.”

Then, almost in unison, we both say “In the envelope” and I press the trigger that starts capture. We were less than a minute into the procedure. But our smiles form a memory that will last a lifetime .

In a few hours , Karen and I perform robotic manoeuvres to position Cygnus and attach it to Node2. We then move the spacecraft and integrate it with the station. There is still much work to be done and the day was long. In agreement with ground control we decide to open the hatch tomorrow. Inside the spacecraft supplies and spare parts await us but it is chock-full of the dreams of those who took part in this space adventure and full of affection from our friends and family on the ground. 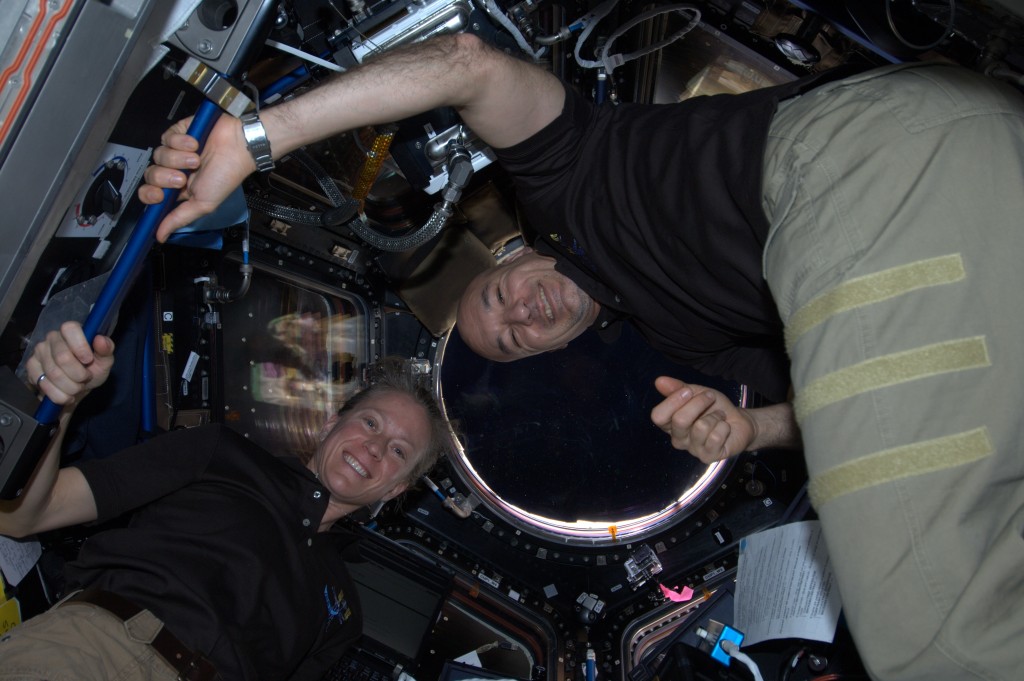