The noun ‘station’, contrary to the verb, brings to mind images of movement: the coming and going of travellers, vehicles, goods. On the International Space Station in recent weeks we have had a demonstration of the possibilities offered by our extraordinary orbital spaceship which has been my home now for little over three months.

The first departing spacecraft was Kounotori4, the Japanese White Stork that kept us company for several weeks, increasing and enriching Node 2’s volume with its presence. The cargo ship has returned to Earth’s atmosphere, disintegrating in a shower of blue plasma. I was the one to send the command that started the reentry manoeuvre: I followed the cargo vehicle with my eyes and I saw the golden glitter of the heat shield as it moved away from the Space Station, silhouetted against the brilliant blue Earth. “It’s just a robot,” I said to myself, “there is no need to be sentimental …” – but I was wrong. Because the hearts of all those who have participated in its perfectly successful mission – no matter how small – beat a bit faster and a little bit of something that makes us human accompanied Kounotori4 on its last journey.

The second departure was the one of the three crew members of Soyuz TMA-08M. The similarities with the departure from Earth is exhilarating to me. In recent days I watched Chris as his day of departure approached. Almost a year ago I observed another Chris (Chris Hadfield), for whom I served as backup, getting ready for his launch. Both astronauts are such extraordinary people that nothing can pierce their armour. A few nights ago I took advantage of a quiet moment after a long day of work, to ask Chris how he felt about his return to Earth. “I think I will miss all of this, but we are ready … yes, we are ready” he said. Then, on the actual day, while Chris, Karen and I were finishing our last dinner together in orbit, suddenly Chris said, as if continuing an unfinished thought: “The strangest thing is that amongst all things that I could think of, the one thought that comes to my mind right now is that, on Saturday, you will be here cleaning, as always – while I will have been back on Earth for a few days … “. 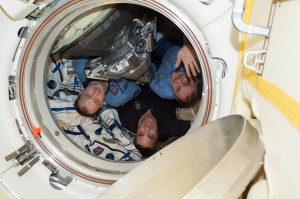 The whirlwind of emotions seems to come suddenly and almost without my noticing, the time to close the hatch comes. Behind it there are three faces that have accompanied me in some of the most extraordinary moments of my life. I referred to everyone and no one in particular when I said goodbye : “I am happy because you are happy…”. Their presence, so different in personality and characteristics, is perfectly summarised by their three shining smiles as the hatch closes with a quiet sense of purpose, sealing them inside their spaceship. In a little while they will put on their suits and settle into position and the onboard computer will come alive under Pavel’s and Sasha’s competent, gloved fingers. In a few hours they will be on the ground.

I thought long and hard about what Chris meant when he said that. I got the answer from my wife, when I talked to her after their departure. With her insight and sensitivity, she explained that probably he was referring to the fact that for the last six months, in an environment where each day presents new challenges, and nothing is ever routine, the Saturday cleaning was the only focal point of the passing of time, of normality. And losing such a reference, however humble it is, takes on a special dimension when everything is about to change in a matter of hours. 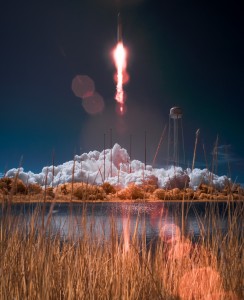 Meanwhile on the Station the work goes on, and I find solace in the unyielding passing of time. They say in Italian that for every departure there is an arrival and preparations are already underway for the arrival of a new cargo ship on its demonstration mission, Cygnus-D, the ‘Swan’. Just a few days ago the official confirmation came that I will perform the spacecraft capture at the controls of Canadarm: a new challenge and another training for me. As on each demonstration mission, you add a new component to the already extraordinary nature of the work due to the awareness that it is still an experimental phase for this ship. I am exponentially grateful to those who have confided the task to me, because it offers a unique opportunity for professional growth, not only for me but also to the space agencies that I represent. This will be the first time that a European astronaut will be at the controls of Canadarm to capture a vehicle in free flight. 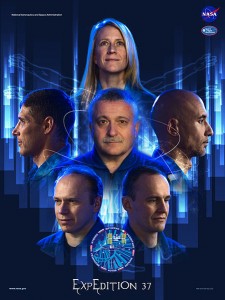 Finally, we are preparing for the arrival of the other half of Expedition 37 – Oleg, Sergey and Mike. I still recall the last time I saw Mike: I was at the European Astronaut Centre in Cologne, Germany, and I had just finished my last simulation on Europe’s space laboratory Columbus. Walking down the long corridor towards the exit on my way to the airport, I remembering seeing Mike busy with his own lesson. I greeted him and he responded with his open and friendly smile. Once at Star City I realised that the next time I would see would be on the Station – five months later!

I would have liked to have organised a similar welcome that Chris had reserved for me – when he shaved his head to look similar to me. Unfortunately, despite my stay in microgravity, my hair has absolutely refused to grow. The desert has remained as arid as sand burned by the blinding Sun. Mike will have to settle for a fraternal and sincere hug.