As part of the ongoing commissioning activities of Gaia, the satellite’s Sky Mapper has briefly been used in a special mode to image a patch of the sky close to the Galactic plane (below). 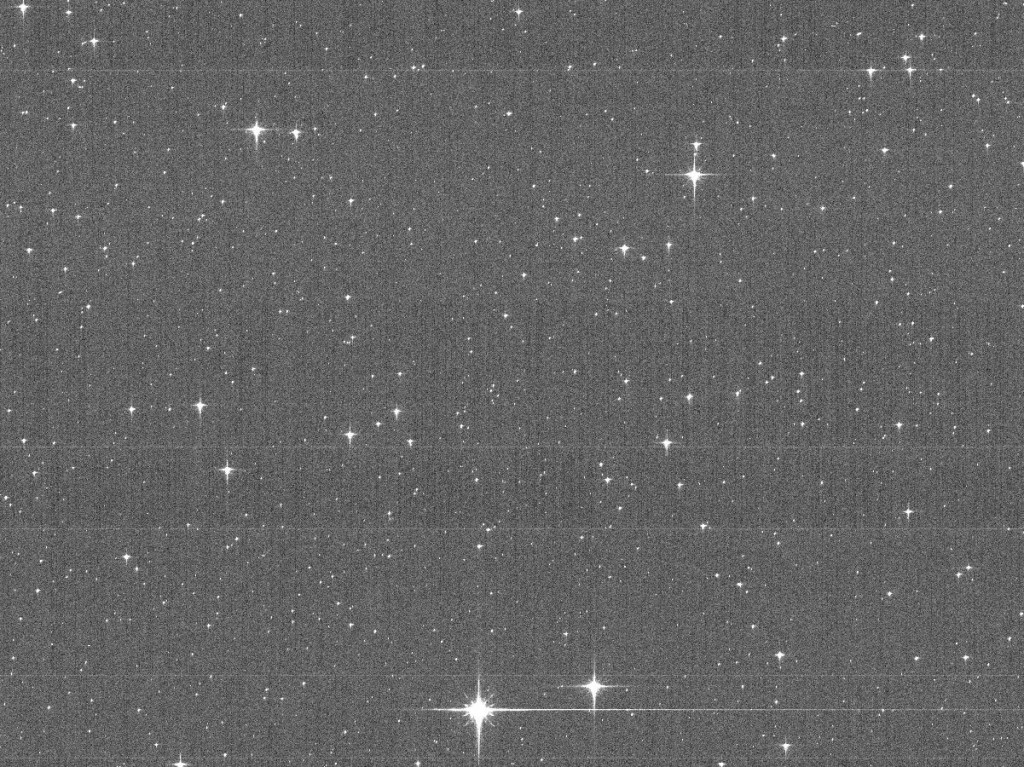 The job of the Sky Mapper is to detect stars entering Gaia’s field-of-view as the satellite slowly rotates. There’s one column of Sky Mapper CCD detectors for each of the two telescopes, in order to keep track of which star is coming from which telescope when the two beams are combined onto Gaia’s big camera.

In normal operations, the Sky Mapper is continuously operating, but the image data are not transmitted back to Earth like this. Instead, Gaia’s on-board computers analyse the data stream “on the fly” to detect the point sources, and to prepare small tracking “windows” which follow the stars as they move across the main astrometric CCDs.

See the image above – or watch this movie – for a reminder of the layout of the Gaia focal plane and how the various parts of it work together.

The figure below shows the same Sky Mapper image, but this time also includes an overlay of the sources which were confirmed as they tracked across the first column of astrometric CCDs.

Red markers indicate stars brighter than magnitude 13: these get downlinked from Gaia as small images centred on the star. Yellow markers then indicate intermediate-brightness stars with magnitudes 13–16, while cyan markers circle the faintest stars, with magnitudes 16–20. For the fainter stars, only the brightness profile in the scanning direction is downlinked.

Finally, a small number of the detected stars – those marked here with squares – are used to measure Gaia’s spin rate and to help keep that very precisely constant via the attitude control system.

These images provide visual confirmation of the on-going tests that show that the critical star detection and tracking hardware and software built into Gaia is working very well indeed.

Meanwhile and also part of the commissioning activities, work is continuing to provide a better understanding of the source of the stray light ‘contamination’ noticed earlier. Further tests have involved tilting the spacecraft to different angles with respect to the Sun to see how that might affect the amount of unwanted light reaching Gaia’s detectors, and the heating of various payload elements to help drive off any residual water ice in the system.

Both actions require considerable time to plan and execute, and also to interpret the results and respond accordingly. We will provide a further update once we have analysed all of the information.

Posted on behalf of Gaia project team.
The new images were also featured today as “Image of the week” on the Gaia community pages.