The final pieces of the Gaia jigsaw puzzle

Here’s a recap of the past week in Kourou, as we put together the final pieces of the Gaia jigsaw puzzle: 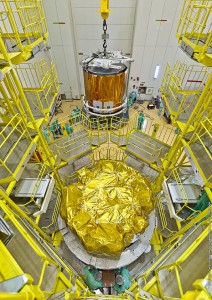 On Tuesday 10 December, after the smooth transfer from the fuelling facility to the Upper Composite Integration Facility (building S3B) we proceeded to mate the spacecraft and the flight adaptor on to Fregat, the upper stage of the launcher.

This was an intricate operation that required a very delicate touch.

Thanks to a very detailed and well-prepared procedure and organisation by the mechanical team, this operation went like clockwork (the spacecraft needed to be rotated several times to enter the yellow scaffolding). On completion of the mechanical mating, it was the turn of the electrical team to verify the health and functionality of Gaia. This is the last electrical test before the encapsulation.

Olivier Michel, Vincent Tortel and Fabrice Cherouat, all Astrium AIT Engineers working at the top of the launch pad gantry.

For the spacecraft, this day was dedicated to removal of the protective covers, the thermal finishing and more inspections. In parallel, the electrical team was busy preparing the set up for launch of the electrical equipment at the launch pad.

EGSE in the bunker (COTE room) under the launch pad

An early start for the team to complete all the last minute activities, remove before flight red tag items and carry out final inspections before the installation of the fairing. The final go-ahead was given by our joint Product Assurance/Quality teams.

It is hard to believe that after all the years spent on integrating and testing, this is the last time we will be able to see Gaia. 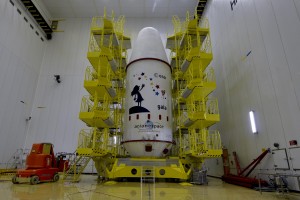 Another small piece of the puzzle was put into place at the end of the day – the installation of the colourful and symbolic Gaia logo on the fairing. This striking image will be seen by all during the launch.

Since we do not have access to our “young girl” any more, some of the team were able to have an almost normal day. Others were busy finalising the electrical ground support equipment at ZLS (the Soyuz launch pad). This is essential for the last minute verification of all the spacecraft systems to give the launcher authority the go-ahead for launch.

It was an early wake up for all to be able to see the rollout of the 3-stage Soyuz rocket. In keeping with tradition, the event began at 06:30. We were able to walk alongside the rocket for the 400 metres from the MIK (Soyuz integration building) to the launch pad and watch the erection of the launcher on the pad. 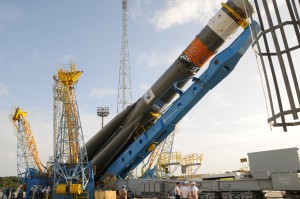 The transporter/erector has 5 stars printed on the side, an indication of the number of successful Soyuz launches from Kourou. It is a tiny number of stars compared to the overall number of Soyuz launches. One could sense the history and heritage of this rocket especially when we saw the various Russian teams line up for their debriefing.

While waiting for the covered gantry to be moved into place over the rocket and the arrival of the upper composite, we had time for a “family picture.” 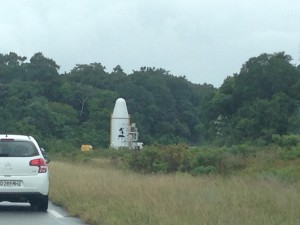 As I write, the upper composite is on its way through the jungle, and it won’t be long before it arrives at the pad.

Editor’s note: The upper composite has arrived in the meantime and  has been installed on the launcher. Photos and a report in French written by Isabelle Desenclos, Astrium Quality Assurance engineer are available in her personal blog.