We have heard and read many numbers about Gaia: the number of stars and other objects that it will observe, the maximum observable magnitude, the microarcsecond of accuracy and the remarkable focal length of 35 m. We have also read that such a powerful telescope on Earth would be able to detect a button on the spacesuit of an astronaut on the Moon. 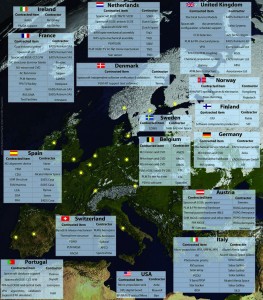 It took over 3.5 million hours to study, design, build and test Gaia. That’s about 300 people working full time for 7 years, spread over 74 different companies and 16 countries.

Meanwhile the design and implementation of the science and the operations ground segments required almost 450 000 hours. As much time will be needed to run the science and operational aspect of the mission even once Gaia will be launched – that is, over 50 people working for the nominal mission lifetime of 5 years.

To process the data that Gaia will transmit to Earth, some 3 400 000 hours will be needed from the Gaia Data Processing and Analysis Consortium (DPAC). That’s more than 400 scientists and engineers working full time each year of operation, spread across over 20 countries.

Luckily, we can easily and swiftly communicate via electronic medias, no matter the location, otherwise it would be a bit cramped to fit all in one room!

We have recorded over 3 200 official meetings, boards and telecons, mainly between ESA, Astrium and Arianespace. This means an average of 2.25 meetings per working day, for 7 years. Considering other necessary meetings with the subcontractors, as well as the non-official meetings, this number could be easily doubled. If the average meeting duration is 2 hours long, it would mean talking uninterruptedly for 530 days! But we are many people, so the continuous talking comes down to a little less than 2 days for each of us and the rest of the 7 years is actually spent working…

The overall number of documents recorded is 29 600. Considering an average of 45 pages per document, it means an equivalent mass of about 3.3 tonnes of paper, which is 1.6 times the wet mass of Gaia. Luckily not all the documents go to print. 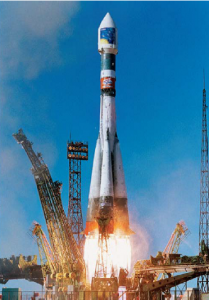 Let’s look into some technical peculiarities, starting with the launch. Gaia gets launched by a Russian Soyuz rocket. In less than five minutes, the first two stages burn 225 000 kilograms of kerosene and liquid oxygen. Kerosene can be compared to ordinary diesel in terms of energetic value and density. If the Soyuz were to pass along a petrol station before launch, it would have a bill of over €320 000  (fortunately we get a discount with our frequent buyers membership card).

Once separated from the Fregat – the Soyuz fourth stage – Gaia will use its two propulsion systems. The chemical system is used for the major manoeuvres. The cruise phase from the separation with the Fregat to the L2 point might seem relatively cheap, about 0.14 ml/km, that is one third of a teardrop. The catch is that to get that efficient, you shall receive a push that brings you to an initial speed of 10km/s – that would get you from Amsterdam to New York in 10 minutes. On top of that, you shall have no friction with either the ground or air, so to use the propellant mainly to make adjustments to the trajectory. And the propellant is not diesel, it’s monomethyl hydrazine and mixed nitrogen oxides, which cost over €300 per litre.

The cold gas micro-propulsion system is used for the fine adjustments of the orbit. To avoid disturbing the payload measurements, the thrust has to be extremely tiny, so tiny that you would need 49 thrusters, operated at their maximum thrust, to lift up a 5g A4 paper sheet. That would be quite an expensive way to lift paper! 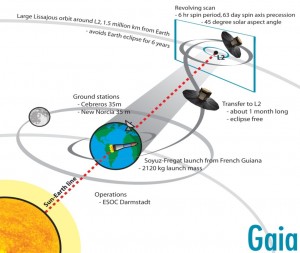 To operate, the spacecraft also needs electrical power. It gets its electrical power from an array of solar cells, pointed to the Sun. Although solar power is free for Gaia once in space, how much would the equivalent power cost be on Earth? Once fully operational, the average power consumption is 1.276 Watts, the equivalent of a hair dryer. Over a lifetime of 5 years, this means 55.888.800 Wh (Watt-hour) or about 56 MegaWh. Because Gaia resides in the L2 point, which is “behind” Earth looking from the Sun, it is on the night-side of Earth and thus night tariff for electricity would apply (which is cheaper, lucky us). This would result in an electricity bill of about €4 500, that is around €75 per month.

Gaia uses GMSK technology for its communication, which in fact is the same technology used in mobile phones. If Gaia were to use earthly mobile phone services, it would be calling for 8 hours per day to download all its data, adding up to 873 600 minutes over 5 years. Unfortunately, Gaia would have to use the abroad tariff (calling from outside Europe, however, 15% discount for long duration calls is granted), this would result in a total bill of €63 960, or over €1000 per month.

Once at the observation point, Gaia will start oscillating around L2 for 5 years, travelling for about 16 million kilometres. It is like going around the world each year 80 times for 5 years (instead of once in 80 days…).

Over its entire lifetime, Gaia will download around 100 TeraBytes of data (1 TeraByte = 1 000 000 000 000 bytes). If the data were copied onto CD-ROMs of 737 MB capacity, a total amount of 135 685 disks would be needed, enough to cover a surface of 7 basketball fields. Running out of CD-ROMs and using DVD writable discs instead, with a capacity of 4.7 GigaByte per DVD we would have 32 000 hours’ worth of movies, that is, over 3 and half years of galactic entertainment.

And at the end, how much does a star cost? Gaia will measure an astounding 1 billion stars in its lifetime. If the overall cost of the Gaia mission is €950 000 000, (including the scientific consortium)  that means that one star costs less than €1, overall a good deal.