Another day in the life of a Gaia test engineer 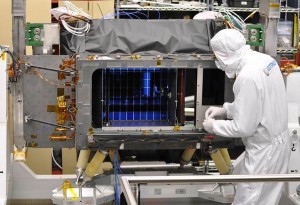 In the middle of last night, we received in Kourou a disturbing call from the Gaia control centre, located in Darmstadt, Germany. Although for us it was middle of the night, it was already morning in the control centre. So what happened?

Although often announced in the media as having the biggest camera on board that has ever flown in space, Gaia does not actually take pictures in the sense as you and me taking pictures on a holiday trip. Instead, it rather tracks the stars across its sensors as the telescopes rotates and the field of view moves across the star filled sky. 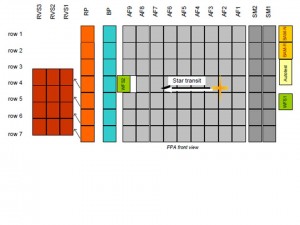 In order to do so, a constant readout of the on board CCDs (light detectors) is done and this takes a lot of computing power. For this, there are not less than seven high performance computers on board, the so called VPUs (Video Processing Units, called so because they interface with the camera). The level of complexity and intelligence inside these processing units is so great that it is actually constantly looking for ways to improve and optimise itself.

Of course also this massive “brain” within Gaia needs to be tested before final closure and lift off. However, it so happened that this test was planned right after an EPS test, an Electrical Power System test in which all the variables of the power system are put to the test.

Gaia Video Processing Unit. One of the seven “brains” which are controlling the camera.

This electrical test made the battery voltage go low, in order to check the internal power converter performance under difficult conditions. Although normally everything is restored back to normal after testing, it so happened that the battery voltage was kept low by accident. Oddly enough, this on its turn affected the computing power of the Gaia central brain in such a way that calculations turned out that Gaia was not going to the L2 point but to the L1.9 point.

Having enough intelligence on board to recognize that of course this is a virtual, non-existing point in space, the spacecraft started to send out distress calls to the operators. But of course, none of the operators here in Kourou were present in the middle of the night. So the call reached out, all the way to Darmstadt, where it was intercepted by the one ground station engineer who was just beginning his morning shift.

The error was easily corrected by charging the battery again and normal operations could resume by the time the Kourou morning shift started, so no harm was done and no time lost. But this proves again the level of attention and vigilance all the engineers and operators here in Kourou need to have in order to succeed in a launch campaign like this!

As the reader has probably detected, this story has a good deal of science fiction. However there are a few points that are absolutely true: 1) Gaia does not take pictures but tracks the stars. Only at the end the mission the collected data will allow us to construct digitally a 3D map of our home galaxy; 2) Gaia has seven high performance computers, each one controlling and collecting science data from one row of the focal plane; 3) Test engineers need to be very careful when testing and follow very strict procedures. However the spacecraft is so complex (can I say intelligent?) that sometimes it seems to behave his own way!