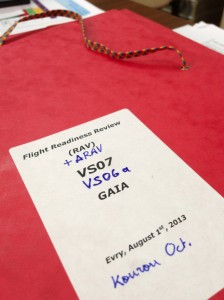 Last week was busy with a number of electrical tests performed in two shifts. In practice it has been busier than anyone could have expected. Of course, electrical tests and the life of a team of more than 50 persons inevitably leads daily to a number of questions needing to be answered generally sooner than later. Our preparation was good enough to cover most of this. However, when postponement of the launch of four O3B satellites – originally planned for 30 September – was confirmed, adaption from all parties was necessary.

We were originally assigned VS-07 (Vol Soyuz 7) and suddenly became VS-06. Just one digit change should not be dramatic but in such a case, a large part of the logistics and planning of the Centre Spatial Guyanais (CSG, or Guiana Space Centre) site and of the launcher had to be re-arranged.

We learned that apart from the specific fairing, our original launcher (VS-07) will be left in storage and we’ll fly with O3B (VS-06). It may sound simple but it changes our perspective, and confirmation of the compatibility will be covered in the frame of a new review. 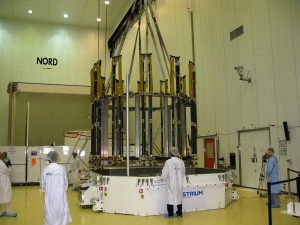 In addition, last week also marked the start of the Deployable Sunshield Assembly (DSA) preparation. The container for DSA transport was stored in the clean room awaiting the arrival of Sener specialists. It has just been opened, revealing our famous, but this time a bit naked DSA, since all the Multi-Layer Insulation (MLI) was removed for inspections, storage and transport, leaving only the structure.

With focus on the progress of on-going activities we also forgot that starting a test on a Friday 13th may not proceed as nominal as expected… No particular technical issue but just additional effort to understand the issue and coordinate the restart. The team in place managed it efficiently.

Although we have experienced some big surprises in the last week, smaller ones have also had a big impact like, for instance, our laundry was found officially closed from one day to the next! Those with clothes left there will have to wait hopefully just a few days until the issue is solved. By chance everyone has taken enough luggage and hopefully shops around shall be able to provide the necessary supplies until re-opening.