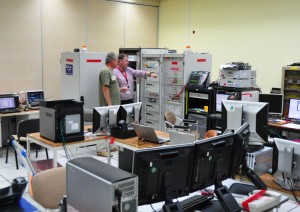 The first switch on after transportation is always an exciting moment. You never know what might have happened during transport and packing/unpacking – a loose screw, a broken connector… you just don’t want to end up with smoke coming out of the spacecraft! There are however numerous safety mechanisms in the test equipment and frequent and thorough inspections of all kinds on the satellite hardware, in order to detect a potential problem before it manifests itself. 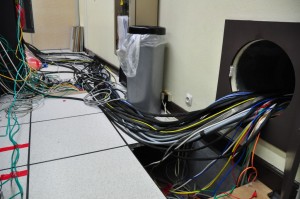 Luckily for us, first switch on went very smoothly. The satellite started up first time right and verification testing could begin. This verification testing switches on all the different units on the satellite and performs a basic health check. This will be the last time we switch on most of these units on ground, so we have to make sure they are in optimum condition before launch.

These verification activities will go on for the rest of the week. At the same time, some final tuning of spacecraft parameters are also being carried out. Temperature and pressure sensor data (the propulsion system has gas tanks on board) are checked and verified with the calibration data on board the spacecraft. This is very important so the satellite operators later on can have a good idea of the amount of propellant left in flight and which maneuvers they can do with it. 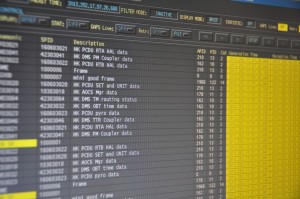 Data from the first switch on

All this takes a great deal of coordination because many teams, both here and at the ground station in Darmstadt, Germany are involved, and a lot of very specialised equipment is used. Part of the day thus goes to coordination meetings and interfacing with each other. However, having an experienced team helps a lot and activities are running smoothly.