Gaia’s first days at the spaceport in Kourou 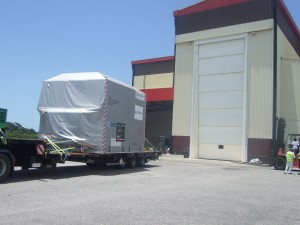 Just after landing in Cayenne, Felix Eboué airport, the Gaia spacecraft container and accompanying equipment have been transported by trucks to Europe’s spaceport in Kourou CSG (Centre Spatial Guyanais). Due to works on the road and due to the locally famous cycle Tour de Guyane, the transport was tricky to plan, with a risk to be forced to wait a few hours at the airport in case of delayed departure. Thanks to the timely arrival of the plane and to the good preparation, the spacecraft container convoy reached the S1B integration building at CSG in time.

During transport under the tropical heat, the atmosphere inside the spacecraft container is controlled using a portable generator. In case of delay or failure, a spare truck and a spare generator with plenty of fuel are part of the impressive convoy lead by several police escorts.

When the spacecraft arrived at CSG, the necessary equipment to unload the container in S1B was ready to allow installing it in the clean room airlock. In order to avoid contamination of the clean room, it stayed in the airlock overnight and was cleaned. The next morning it has  finally been brought into the S1B high bay.

In parallel, accompanying equipment was cleaned, dispatched and made ready for use. The container opening took place early Monday morning (26 Aug). We all were happy to see that the spacecraft was effectively inside and looking good. With the efficient support of our packers and IT engineers, the ESA office set-up is already running, ready for the arrival of the project secretary and the rest of the team. 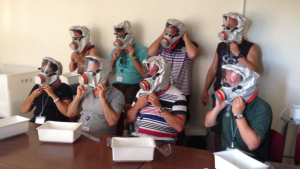 Safety training for the team

All members of the early team managed at best the combination of work, unpacking, getting through the safety training and solving all kind of unexpected popping issues while participating to the numerous coordination meetings with new colleges from Arianespace and CNES.

Preparation for the first planned tests such as alignment and propulsion is already in progress. Tomorrow (Thursday 29 August), the second Antonov plane transporting the Deployable Sunshield Assembly and the Electrical ground support Equipment are planned to land at Cayenne airport. We’ll report on the arrival in our next blog post.