At home with ESA

Efforts are underway around the world to stop the spread of coronavirus, which means many of us are confined to our homes. We’re unable to visit loved ones and in some cases, unable to go outside at all.

Not being able to go about our normal daily lives, coupled with the risk of contracting this new and highly contagious virus, brings up all kinds of emotions. So we asked astronauts and experts who have experienced long periods of isolation or quarantine for their tips to help us through.

ESA astronaut Thomas Pesquet was meant to travel to Houston, USA to begin training for his next mission to the International Space Station. Instead, he is staying at home in Cologne, Germany to help #StopTheSpread and encourages you to do the same.

Fortunately, he is able to partake in some of this training via video call and carry out other ESA work from home. You’ll see he’s learnt resilience and adaptability from his time in space.

Also staying home in Germany is ESA astronaut Matthias Maurer. As he adapts to a new normal, he shares the ways in which he’s finding inspiration in isolation to help others get through.

Reducing the risk in space

Luca Parmitano is currently with his family in the USA, but not so long ago he was living and working on the International Space Station. When we caught up after his mission we asked how astronauts deal with the risk of colds and flu in space. From quarantine to cleaning day, here’s what he had to say.

ESA astronaut support engineer Romain Charles knows more than most about living in isolation – in 2010/11 he spent 520 days locked in a mockup spacecraft as part of Mars500.

Mars500 locked six ‘marsonauts’ in a simulated spaceship near Moscow, Russia for the time it would take to fly to Mars and back plus 30 days spent exploring its surface. It was the first full-length, high-fidelity simulation of a human mission to our neighbouring planet. The crew went into lockdown on 3 June 2010, and they did not open the hatch until 17 months later on 4 November 2011.

Mars 500 was a success in that it proved that humans can survive the inevitable isolation that is needed for a mission to Mars and back. Psychologically, we can do it!

The crew had their ups and downs, but these were to be expected. In fact, scientists anticipated many more problems, but the crew did very well coping with the monotonous mission, with little variation in food and even a communication delay over 12 minutes one-way.

During their simulated mission, the crew lived in isolation without fresh food, sunlight or fresh air. The participants from Italy, Russia, China and France had no external cues such as the Sun going down at night to remind them when to sleep.

Their bodies are among the most researched in the world. Years of constant monitoring, prodding and taking blood allowed scientists examined how they reacted to the time in confinement with experiments focussing on their bodies, mental states and performance.

Discover Romain’s nine top tips for getting through confinement in the video below.

It’s not just astronauts who learn to live through long periods of isolation. Adrianos Golemis is an ESA flight surgeon based at the European Astronaut Centre in Cologne, Germany. He spent nine months in isolation at Concordia research station and three weeks in quarantine with ESA astronaut Luca Parmitano.

Adrianos shared his experiences in a two-part blog post. Part one provides readers tips to “trick the clock” while part two encourages you to enact Operation Aikidō as you turn inconvenience to opportunity. 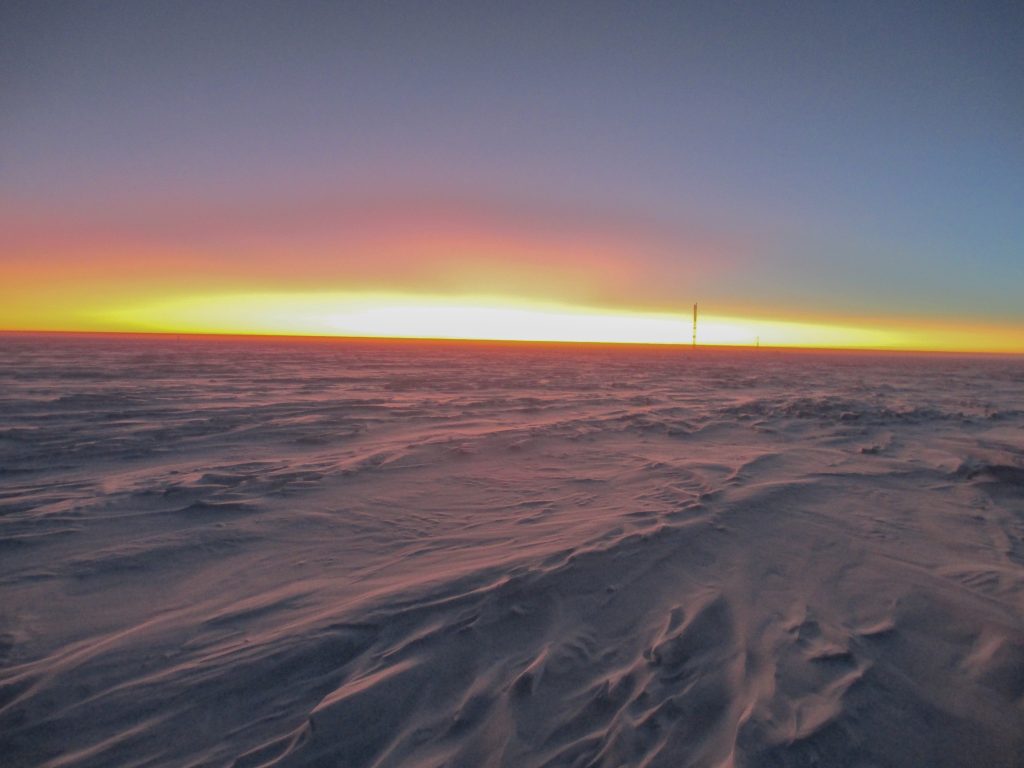 The simple beauty of a sunset in Antarctica. ESA-A.Golemis.

Small spaces, limited equipment – sound familiar? When it comes to missions to the Moon and Mars, astronauts will need to work smarter to maintain optimum bone and muscle health and jumping could be key.

In a recent ESA-funded study, jumping came out as one of the best ways to stimulate many different systems. It’s a simple, old-school exercise that you can try at home.

Jumping rope is a simple, yet effective, exercise that you can do at home. Unsplash-C.Karlsen.

Keeping in touch with Space Connects Us

On Thursday 26 March, ESA teamed up with Asteroid Day to connect Europe and the world with astronauts, scientists and world-famous performers, bringing a message of hope and support for everyone faced with the Coronavirus crisis.

Many of the experiments carried out on Earth’s only orbit outpost – the International Space Station – have benefits for Earth.

Recently, we delved deeper into an experiment investigating smart surfaces to stem the growth of pathogens. Known as Matiss, this experiment began during Thomas’ first International Space Station mission ‘Proxima’.

Despite current challenges, dedicated teams of ESA experts are working hard to ensure the Space Station continues operations. Here you can learn more about the way in which ground teams are working in control centres around the world.