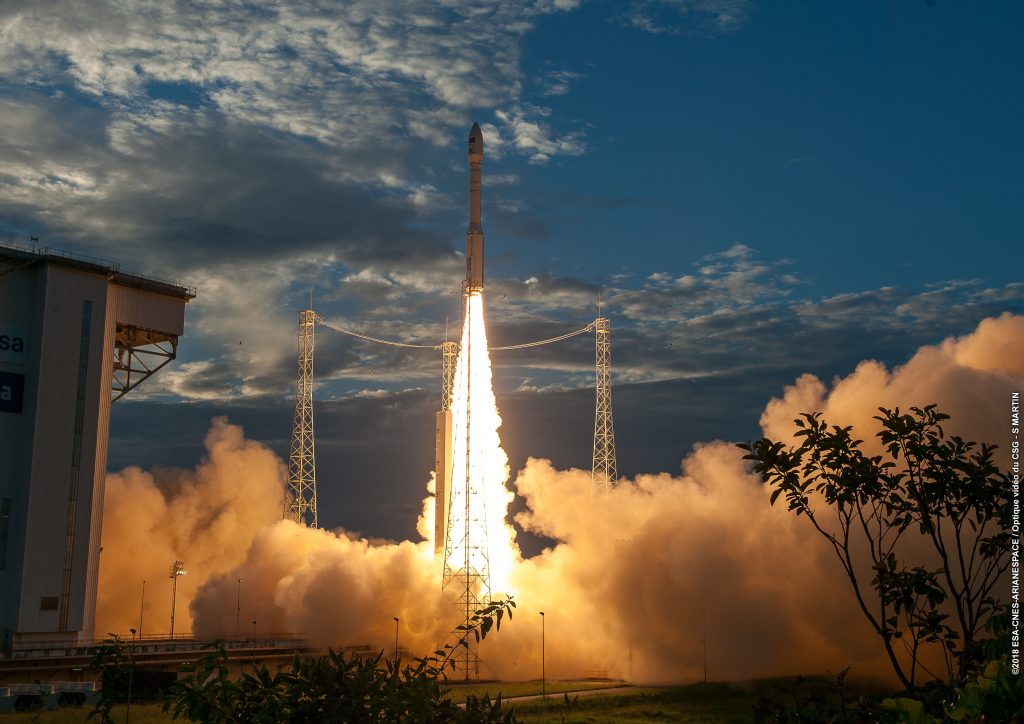 ESA’s Earth Explorer Aeolus satellite has been launched into polar orbit on a Vega rocket. Using revolutionary laser technology, Aeolus will measure winds around the globe and play a key role in our quest to better understand the workings of our atmosphere. Importantly, this novel mission will also improve weather forecasting.

Some 55 minutes later, Vega’s upper stage delivered Aeolus into orbit and contact was established through the Troll ground station in Antarctica at 00:30 CEST on 23 August.

Named after Aeolus, who in Greek mythology was appointed ‘keeper of the winds’ by the Gods, this novel mission is the fifth in the family of ESA’s Earth Explorers, which address the most urgent Earth-science questions of our time.

“Aeolus epitomises the essence of an Earth Explorer. It will fill a gap in our knowledge of how the planet functions and demonstrate how cutting-edge technology can be used in space,” said Jan Wörner, ESA Director General.

ESA’s Director of Earth Observation Programmes, Josef Aschbacher, added, “Aeolus carries the first instrument of its kind and uses a completely new approach to measuring the wind from space. Such pioneering technology has meant that it has been a demanding mission to develop, but thanks to all the teams involved we are thrilled that this extraordinary satellite is now in orbit.

“We look forward to it living up to expectations!”

Highlighted by the World Meteorological Organization, the lack of direct global wind measurements is one of the major deficits in the Global Observing System.

By filling this gap, Aeolus will give scientists the information they need to understand how wind, pressure, temperature and humidity are interlinked.

This new mission will provide insight into how the wind influences the exchange of heat and moisture between Earth’s surface and the atmosphere – important aspects for understanding climate change.

Aeolus carries one of the most sophisticated instruments ever to be put into orbit. The first of its kind, the Aladin instrument includes revolutionary laser technology to generate pulses of ultraviolet light that are beamed down into the atmosphere to profile the world’s winds – a completely new approach to measuring the wind from space.

While Aeolus is set to advance science, it will also benefit society. Although weather forecasts have advanced considerably in recent years, Aeolus will provide global wind profiles to improve the accuracy even further. In addition, its data will be used in air-quality models to improve forecasts of dust and other airborne particles that affect public health.

The satellite is being controlled from ESA’s European Space Operations Centre in Darmstadt, Germany. Controllers will spend the next few months carefully checking and calibrating the mission as part of its commissioning phase.