Editor’s note: This post was contributed by Dieter Pikulski, who won the Copernicus Masters GEO Illustration Challenge. Part of his prize was a trip to Europe’s Spaceport in Kourou to witness the launch of Sentinel-2B.

If you can imagine an action-cam mounted to a rocket and a thundering 3D sound experience, this story is definitely for you.

For this is what it feels like when you look at the impressive images of the rocket launch – while trying to figure out the exact number of subwoofers that would be needed to create such a sound (from a distance of 12 km). What happens there is just breathtaking!

Thanks to GEO magazine and an illustration challenge I had entered and won, I was allowed to join the ESA delegation visiting the launch of the Sentinel-2B satellite. Before the actual launch, an intensive schedule including visits to the assembly hangars of Ariane 5 and Soyuz as well as to each of the three launch pads (including the ‘headliner’ Vega) made the hours fly by. It was just unbelievable that we could literally touch these rockets … at least those that were not launching on that night.

Finally, zero hour was drawing near. At first, one can feel the euphoria at the Jupiter Control centre. Yet, a few moments later the band begins to play: Even though the operators are separated from the ‘audience by a glass wall, you can sense the tension. After all, the majority of the spectators are directly involved in this project.

Within the room, an absolute silence sets in. From then on, the presentation and livestream comments are only audible via headphones. After a few comments and addresses – about two minutes before launch – the silence is superseded by the booming crack of the gates being opened on both sides of the control centre. There’s a commotion as everyone flocks out to witness the rocket launch live.

And then the countdown, the most important aspect of every rocket launch, begins. When the rocket is eventually lifting off, the night sky is illuminated – and you experience a mind-blowing scenario in spite of the 12-km distance: a ‘sunrise at midnight’. Fortunately, this launch takes place at a late hour (more precisely: 22:49 local time), thus making it all the more impressive.

However, there are only a few seconds to enjoy the spectacle to the fullest, for the little Vega rocket lifts off at a very speed … unfortunately into a very cloudy night sky. 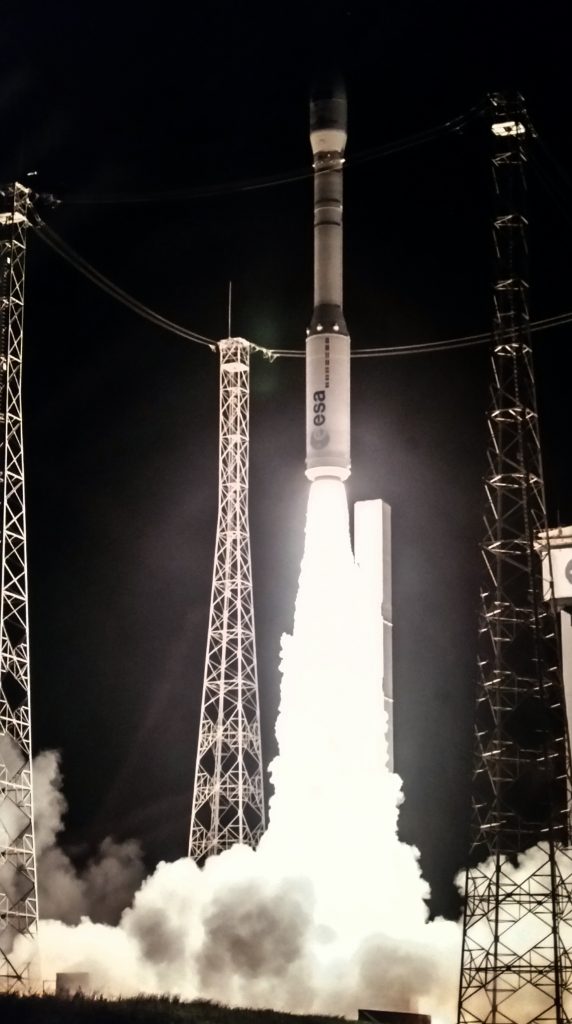 The video I shot with my mobile phone? A bad joke, not worth watching. I would have loved to delete it immediately if not for all the people who could not be on the spot and who would have asked me to shoot it anyway. It doesn’t live up to the event and the impressions in any degree. The ESA videos taken by the stationary cameras at the launch pad are markedly worth watching – and they were online and available to all just after the launch.

This mission constitutes a great technological achievement – also in respect of the satellite which is intended for Earth observation using different colour spectra (e.g. for flood forecasting, harvests etc.). The satellite is as impressive as the interesting space programme. Thanks to the EU, this complex, cross-border project can be carried out effectively. The fact that the data is absolutely available to everyone in the whole while world is especially noteworthy. Anyone who has got an idea on how to use this data for the good of humanity is welcome to do so. At this point I have to mention that the topic of the illustration challenge I won was ‘Transcending Borders’. Very convenient.

Back to little Vega: The rocket is still on its way. It will take another hour until the satellite finally reaches its orbit. Until then the atmosphere remains cautious.

Suddenly, another commotion occurs a couple of rows in front of me – brought about by hectic phone calls and discussions. Meanwhile, the operators who are still sitting at their computers are rejoicing. Their task, transporting Sentinel-2B to its destination, has been accomplished after separating from the rocket’s upper stage and the solar panel deployed.

Following this, the successful rocket launch is celebrated with a lot of champagne in the courtyard between the museum and Jupiter Control.

I rejoice in this unique once-in-a-lifetime experience … and in the fact that the rest of the delegation, who will be flying home the very next day, is envying me, while I may enjoy the wonderful nature of French Guiana for another couple of days.