A great update today from ESA’s Catherine Watson, on the Swarm project team and actually now in Plesetsk, describing activities back at ‘mission control’ – ESOC. She wrote: “We are having a quiet phase here in Plesetsk and it would be a good opportunity to describe how the teams at ESOC in Darmstadt are also rather busy with Swarm preparations.”

Back at Mission Control

Preparations are continuing in the Mission Operation Centre, housed within ESA’s ESOC facility in Darmstadt, for the Launch and Commissioning Phase. 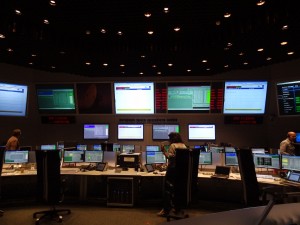 Flight Director’s view of the front rows in the Main Control Room at ESOC, with the Spacecraft Operation Manager console position in the centre of the team. Credit: ESA

Colleagues from the Swarm Project Team at ESTEC and from an Industrial team have joined the Flight Operation team at ESOC to prepare for launch day.

Their first task was to learn about and understand the Swarm-specific flight operations infrastructure (which has been carefully built up in the past several years), find their way around the Main Control Room, the supporting facility rooms and the Project Support Room as well as get to know the Flight Operations team and their roles.

The teams have been rehearsing real-time mission operations, which start after the Swarm satellites have been separated from the Breeze-KM (upper stage) and adapter in orbit. Separation is due to take place approximately 1 hour 30 minutes after launch.

The Project team as well as the team from Industry have been familiarising themselves with all aspects of the Launch and Early Orbit Phase (LEOP) and the follow-on Commissioning Phase. Due to the complexity of deploying three satellites safely in orbit, there are numerous procedures and timelines that have to be closely followed and adhered to.

As part of the preparation, the teams train in a simulated environment and are confronted with complex situations and anomalies, which have to be solved in real-time to ensure the safety and correct functionality of the satellite and scientific instruments. 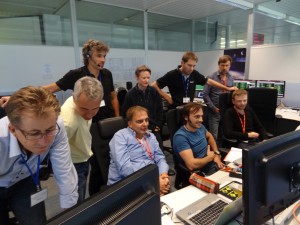 Many possible variations of errors and issues are introduced into the simulated satellites or the ground systems during these training sessions, which – although the teams learn to solve them – they hope do not actually occur during LEOP.

One readiness highlight will come on 26 October, when the launch campaign team at Plesetsk will conduct a launch set-up rehearsal. On that day, the teams at ESOC will be on console in ‘listen in’ mode, monitoring what happens during the satellite preparations up to the launch countdown.

The two centres – Plesetsk and ESOC – each concentrate on a critical period of the launch: The team at Plesetsk are focused on what happens up to and including lift-off, while the teams at ESOC are focused on the mission starting after separation from the upper stage, when they acquire the first signals from the satellites.