Temperature control is very important to ensure that all of MetOp’s electronics and instruments function optimally in space. When in orbit around Earth, the satellite passes between sunlight and shadow. Consequently, it has to withstand extreme swings in temperature: from below –100° C to above 100°C. 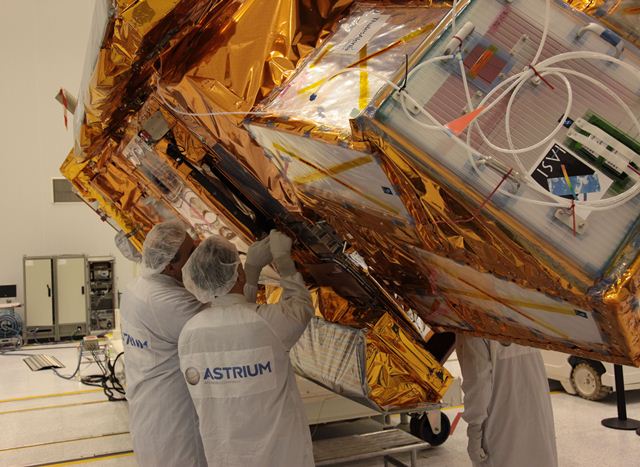 This is why a dedicated thermal design was chosen to keep the electronics within a more ‘gentle’ range of temperatures, generally between 0–20°C. This is done by using a combination of active thermal control measures such as electrical heaters and passive methods such as space-qualified paints, tapes and multilayer insulation (MLI), essentially on the external surfaces of the satellite.

The MLI is literally a ‘smart’ thermal blanket. Not only does it prevent heat from the Sun getting inside the spacecraft, but it also prevents the heat produced by the electric heaters being dissipated into outer space.

MetOp-B being moved to a horizontal position for MLI finalisation

In the Baikonur Cosmodrome cleanrooms the installation of the pieces of MLI has been finalised by the Astrium teams and inspections to confirm proper installation were conducted.

This is a meticulous task since there are several ways to attach the MLI. Some pieces are attached via Velcro (similar to the stuff on your kids’ shoes!), some others are punctured in order to insert a stud and closed by a clip. The last pieces are actually taped to the structure. These attachments techniques have to be carefully controlled so that the vibrations during launch don’t cause the MLI pieces to detach.

Another critical aspect to check for any holes or cavities in the MLI. Indeed the smallest hole might lead to a leakage of heat, or even worse trap heat from the Sun. The sun-trapping effect occurs when a ray from the Sun enters a hole (or cavity) and is partly absorbed and partly reflected many times by the internal surfaces. This leads over-heating of the spacecraft surfaces and at worst it could even damage critical elements.

That is why the upmost care is taken by the integration and validation teams while inspecting the installed MLI.

However, it is with pleasure that we can announce that the main MLI activities have been completed successfully. The last piece of MLI will be added just before the MetOp satellite joins the Soyuz Fregat.

Next step is the countdown rehearsal.

Until our next entry in the blog, do not forget the thermal engineers motto: