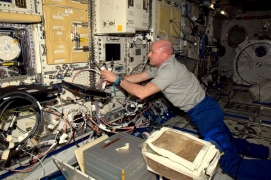 In the past weeks I have been doing many ‘life science’ experiments investigating human behaviour in weightlessness. I worked with the Fluid Science Laboratory examining liquids in space. I also conducted maintenance work and small repairs. Just like a laboratory on Earth, maintenance and repair is important to keep everything running smoothly. Some experiments on the Station run autonomously. These ‘boxes’ can be controlled from Earth. Astronauts unpack the hardware from cargo ships, install the equipment and turn it on or off. If problems occur we see how we can solve them together with ground control. I help the scientists on Earth. They design and build the experiments. I am here to make sure the experiments can be run in microgravity.

Radiation
In addition to these tasks I do a lot of maintenance and routine work on ISS hardware. For example I measured sound levels, took samples of water and air and checked if bacteria were growing in near ventilation ducts, towel racks and so on. The samples were returned to Earth with the Dragon. Teams on Earth will interpret the findings and change procedures. I also hung up 23 new radiation sensors. The previous ones will return in my Soyuz. The sensors measure how much radioactivity from space reaches the interior of the Space Station.

We are not protected by Earth’s atmosphere in the ISS. People should not be exposed to too much radiation so it is important to know which areas let radiation through.