ATV gives us a boost

We have an extra module on the ISS: the European cargo ship ATV Edoardo Amaldi. We were worried for a moment. Soon after docking on the 29th of March ATV was not receiving electricity from the ISS. Luckily the problem was fixed before the batteries ran down and now both systems work. Once again proof that it is handy to have back-ups for everything in space travel. In the mean time we hurried to unload all the cargo. Imagine if the electricity problem could not have been fixed… ATV would have had an unplanned departure after only a few days. We worked all through Saturday to unpack. I was in charge as I am the ‘loadmaster’. I found a nice package for me from home amongst the cargo. Photos, a flag from my village, a drawing by Sterre and some other things. This is great for morale of course. 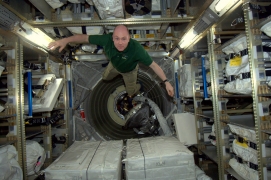 ATV is a very large module. When we opened the first hatch and saw ATV’s docking probe there was a metallic smell. That is the smell of outer space. We had to follow numerous procedures to regulate the pressure, filter the air and get the ventilation up and running. We wore masks and protective clothing because safety comes first. We can start pumping water and air to the ISS now that most of the cargo is unloaded. In our free time we float around in ATV. It is large enough!

Higher orbit
One of ATV’s tasks is to boost the ISS to a higher orbit. The cargo ship gives us a helping hand. Even at 400

kilometres above the Earth we are slowed down by small air particles. The Space Station falls back to Earth every day by tens of metres. ATV can push the ISS with its engines. The cargo ship has done this twice now. I could not see the engines burn as they are on the back of ATV. But I did see how the engines lit up a halo of gas particles and how Service Module Zvezda’s thrusters corrected ISS’s position so that its ‘belly’ is facing Earth. A beautiful sight.


We took as many photos and films as we could of ATV’s approach and docking. You can make a beautiful time lapse video of these as you can see here: