“Good evening, Kraftwerk, good evening, Stuttgart!” On 20 July 2018 at 21:50 local time, ESA astronaut Alexander Gerst welcomed the legendary electronic band Kraftwerk and 7500 visitors to the Jazz Open Festival on Stuttgart’s Schlossplatz – live from the International Space Station ISS, where he will live and work until mid-December 2018.

“I am one of only six people in space, on the outpost of humanity, the International Space Station ISS, 400 kilometers above sea level. The ISS is a Man Machine – the most complex and valuable machine humankind has ever built,” he told the astonished audience.

“Here in the European Columbus laboratory, the successor to the Spacelab, the European Space Agency ESA is researching things that will improve daily life on Earth. More than 100 different nations work together peacefully here and achieve things that a single nation could never achieve. We are developing technologies on board the ISS to grow beyond our current horizons and prepare to take further steps into space, to the Moon and Mars,” Alexander said. 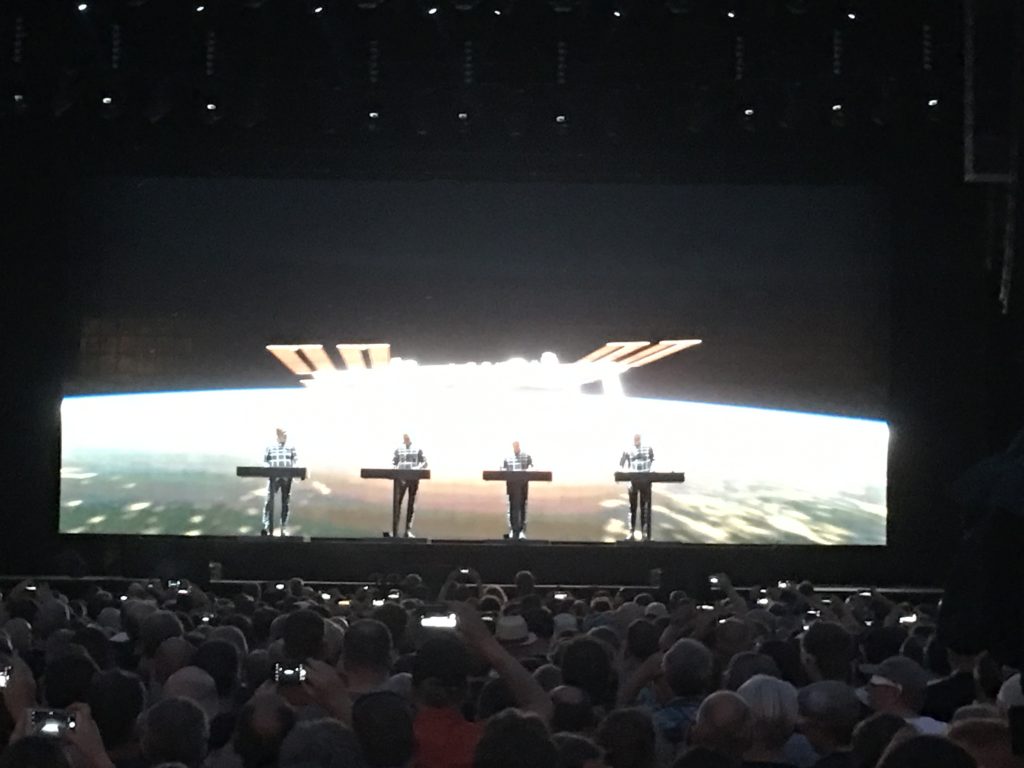 However, as Kraftwerk founding member Ralf Hütter emphasised, Alexander’s appearance was not only about greeting Kraftwerk and the audience in Stuttgart but also about “music as the universal language of the world”. After addressing the crowd, he and Alexander played a special duet version of the track Spacelab, for which Alexander had a tablet computer configured with virtual synthesizers on board. 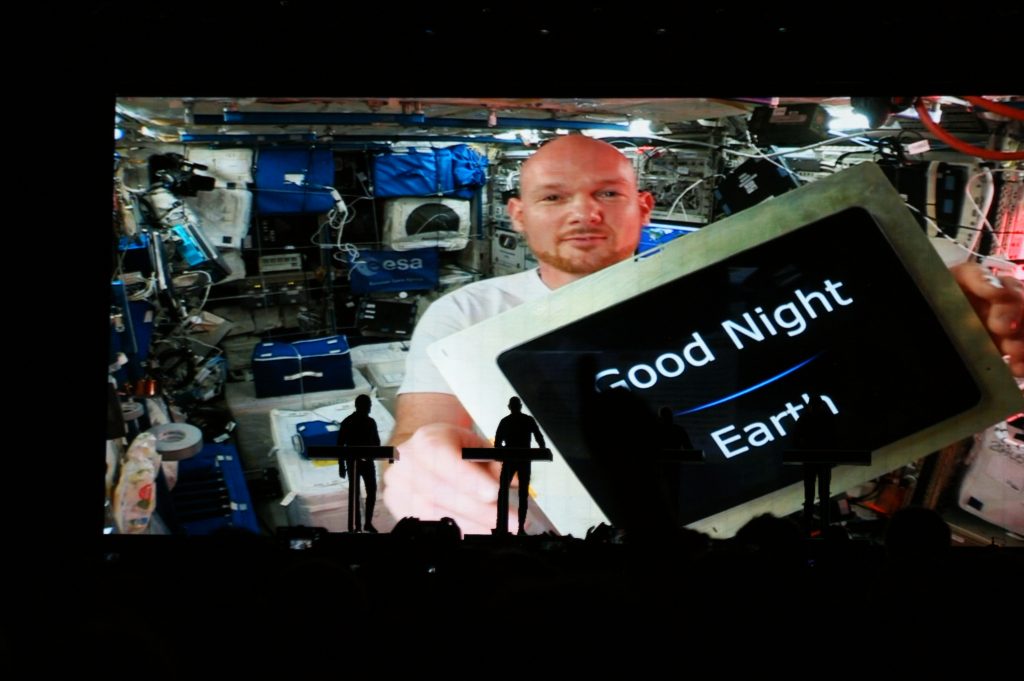 After Kraftwerk had finished the track and Alexander bid farewell to the audience from the ISS with a “Good Night Earth”, the band continued their brilliant set while the audience probably wondered a few more times whether what they had just seen and heard was really live and real. We can assure you it was, and for everyone involved the partnership truly was out of this world. 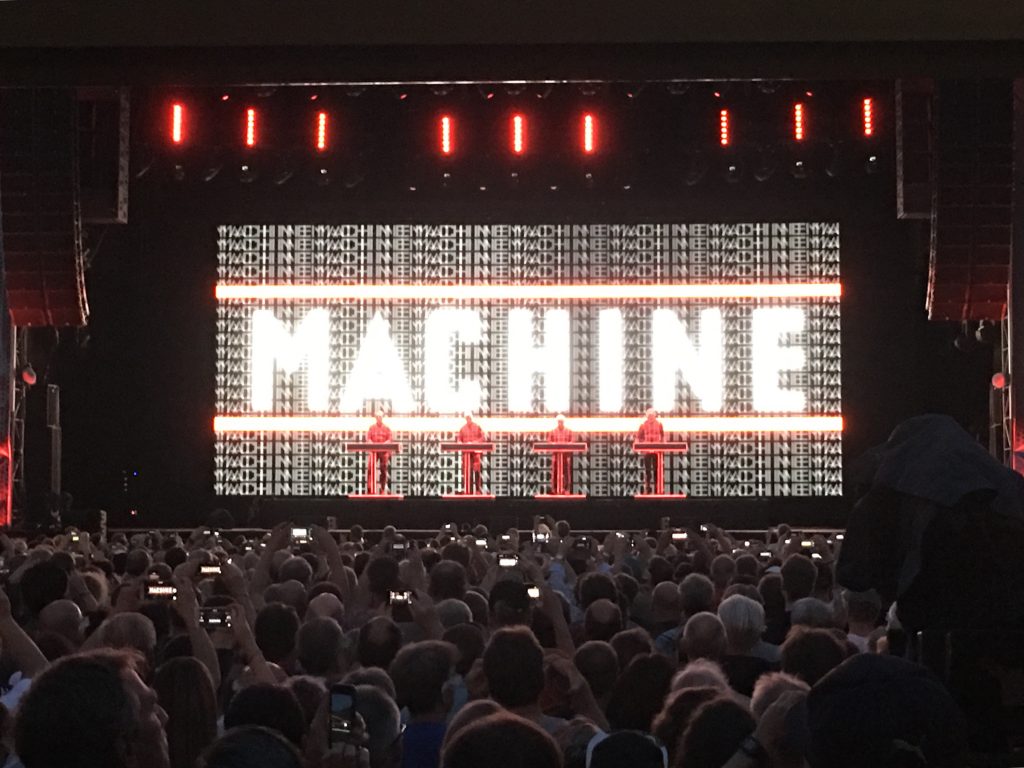 The multi-media project Kraftwerk was started in 1970 by Ralf Hütter and Florian Schneider. They set up their electronic Kling Klang Studio in Düsseldorf, Germany, where they conceived and produced all Kraftwerk albums. By the mid 1970’s Kraftwerk had achieved international recognition for their revolutionary electronic ‚sound scapes’ and their musical experimentation with robotics and other technical innovations. With their visions of the future, Kraftwerk created the soundtrack for the digital age of the 21st century.

Their compositions, using innovative techniques, synthetic voices and computerised rhythms, have had a major international influence across an entire range of music genres: from Electro to Hip Hop, from Techno to SynthPop. In their live performances, Kraftwerk – Ralf Hütter, Henning Schmitz, Fritz Hilpert, Falk Grieffenhagen – illustrate their belief in the respective contributions of both man and machine.

About the European Space Agency and Alexander Gerst

Alexander Gerst is a European Space Agency (ESA) astronaut. In 2014 he spent six months on the International Space Station for ESA’s Blue Dot mission. He is now back in space on his second mission called Horizons where he will take over as Station commander for Expedition 57. Alexander is a geophysicist and volcanologist. https://alexandergerst.esa.int/

The European Space Agency (ESA) provides Europe’s gateway to space. ESA is an international organization with 22 member states, created in 1975, with the mission to shape the development of Europe’s space capability and ensure that investment in space delivers benefits to the citizens of Europe and the world.

ESA develops the launchers, spacecraft and ground facilities needed to keep Europe at the forefront of global space activities. Today, it develops and launches satellites for Earth observation, navigation, telecommunications and astronomy, sends probes to the far reaches of the Solar System and cooperates in the human and robotic exploration of space. ESA also has a strong applications programme developing services in Earth observation, navigation and telecommunications.