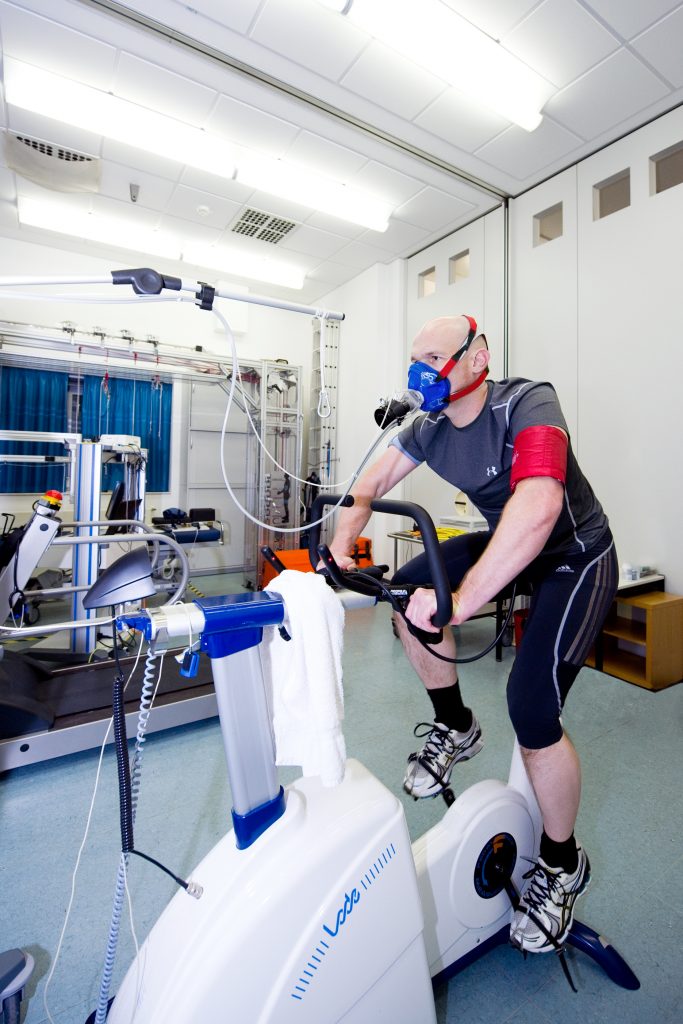 “You do not have to be a top athlete to be an astronaut, but a good level of fitness is important,” says Alexander Gerst, describing the fitness requirements for an astronaut. In fact, a professional athlete would have greater problems during a long stay in weightlessness than somebody with a lower level of training. Top athletes often have an enlarged heart, which pumps more blood and, thus, more oxygen throughout the body during exercise. Complications can occur if the heart is not exercised with regular training. “At the moment, I am training for about six hours a week, mainly focusing on cardio fitness and muscle development, but also on the shoulder area and forearm muscles in preparation for the spacewalk,” adds Alexander. On the International Space Station (ISS) the astronauts train for roughly two hours per day, but muscle building is not possible. The training merely slows down muscle and bone mass loss, which is caused by the absence of weight-bearing in microgravity.

To tailor Alexander Gerst’s training plan for his time on the ISS to his requirements, he is undergoing detailed medical examinations prior to launch. At the end of February 2014, he completed the Pre-flight Medical at the DLR Institute of Aerospace Medicine in Cologne – this examination has always previously taken place at NASA’s Johnson Space Center (JSC) in Houston, USA.

One focus of the medical team, which consists of doctors from ESA and DLR, is the eye examination. Results from studies conducted on other astronauts suggest that weightlessness has a negative effect on vision; more research is required in this area. The examination includes Optical Coherence Tomography (OCT), ultrasound images of the eye as well as detailed images of the head using a Magnetic Resonance Imaging (MRI) scanner. During his mission on the ISS, Alexander Gerst will be carrying out ultrasound exams on his own eyes. When he returns to Earth in November 2014, a further examination will be carried out and the data compared. In total, there will be some 100 medical experiments during the ‘Blue Dot’ mission.

Magnetic Resonance Imaging is used to take a closer look at the head and eyes. Image credit: DLR, CC-BY 3.0

The examinations are anything but routine for the doctors taking part; the medical data for all of the astronauts is collected in a NASA database and must be comparable. On Earth, there are generally a large number of medical research test subjects that deliver scientifically valuable information. But as the number of astronauts and the time they spend in space is rather limited in comparison, the doctors have to be trained appropriately. It is important that the examinations are carried out using the same equipment in Houston and Cologne. For example, the MRI scanners used at DLR Cologne and NASA in Houston are identical. This guarantees that the data will be comparable. The DLR doctors are also in regular contact with their colleagues at JSC to replicate the NASA standard at the DLR Institute for Aerospace Medicine.

The results from the medical tests conducted at the end of the mission will be compared with the data acquired before and during the flight, enabling any changes to be accurately recognised and to plan for rehabilitation, so that Alexander Gerst will quickly get fit again.

Incidentally, the pre-flight checks also include a visit to the dentist. It would be a long wait for an emergency appointment if you got toothache at an altitude of 300 kilometres.