Kicking off science: Sarcolab-3 and muscle loss in space

After arrival in the early hours of Saturday morning (29 July) to the International Space Station, and having the rest of the day off, ESA astronaut Paolo Nespoli got straight to work by Sunday 30 July. 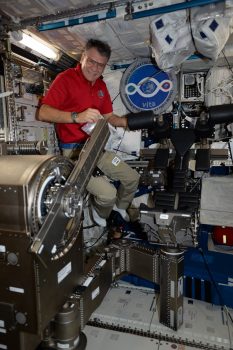 Paolo with MARES, aka The Beast. Credit: ESA/NASA

The first experiment for Paolo on a long list of science activities during his VITA mission is Sarcolab-3: this experiment (full name “Myotendinous and Neuromuscular Adaption to Long-term Spaceflight”) investigates how muscles adapt to and deteriorate in weightlessness.

Researchers know that prolonged exposure to weightlessness causes weaker muscles. With the Sarcolab-3 experiment, an international research team with investigators from ESA, NASA and the Russian Institute of Biomedical Problems want to find out why this happens.

In particular, the experiment targets the calf muscle where it connects to the Achilles tendon, or the load-carrying parts of our legs. On Earth, this muscle is constantly stimulated by gravity in the form of walking and other exercise. In microgravity, where floating is the norm, it is greatly underused. 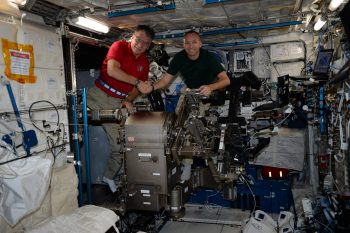 Paolo and his fellow Expedition 52/53 crew members Randy Bresnik of NASA and Sergey Ryazansky from Roscosmos are participating in the experiment. Muscle fiber samples were taken from the crewmembers pre-flight and will also be collected post-flight to be analysed for changes in chemical and structural properties. For in-flight measurements, the astronauts use MARES, the Muscle Atrophy Resistive Exercise System located in the Columbus module of the ISS.

MARES is a physiology instrument that offers detailed information about how muscles behave during spaceflight. It is one of the largest human physiology instruments ever uploaded to the ISS and is kept stowed away when not in use. Unpacking and setting up the machine is a day’s work in itself. Watch a time lapse video of MARES setup here. 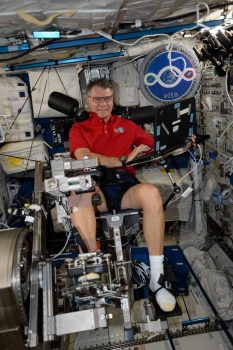 Once set up, Paolo straps his leg, outfitted with some sensors, into MARES. The machine then stimulates the leg and measures the muscle’s response.

Understanding how muscle loss works in space means researchers can create effective countermeasures. Already in place is a strict daily exercise regime for astronauts to help them stay fit during their stay in microgravity . For two hours a day they must work out using specially designed equipment. With insights from Sarcolab-3, researchers hope to create more effective actions against muscle loss in space.

But of course, muscle atrophy does not only occur in space. Data from Sarcolab-3 on how and why muscles lose strength can be highly applicable to patients suffering similar medical conditions on Earth.