FAQ developed by the VMC team at ESOC. Please read below before contacting us, as we will regularly update responses to the most common questions here. Scroll down for general specifications and contact information; the links on the right give more technical information about the VMC and its use and history on Mars Express.

The Visual Monitoring Camera (VMC) is carried on Mars Express, as well as several other ESA spacecraft, including Cluster, XMM-Newton and Herschel-Planck. On Mars Express, its formal role was to image the separation of the Beagle 2 lander, a one-time event in 2003. The camera was dormant between 2003 and 2007.

The VMC consists of a small CMOS-based optical camera, which can be fitted with an on-pixel RGB colour filter for colour images. The camera has a basic command interface that can be operated by ground controllers at ESOC; it does not offer advanced features such as updateable software as found on other instruments. The VMC really is just a regular 'web cam' such as found attached to any home PC, except it is specially qualified to function in the space environment.

2. Who operates the VMC?

The VMC is operated by the Mars Express Flight Control Team, based at ESOC, Darmstadt, Germany. This activity is conducted on a 'best-effort, last-priority' basis given the availability of planning time, command upload time and data down-link capacity.

This is a unique situation, as Flight Control Teams for ESA missions usually do not 'operate' payload instruments; this is done by dedicated, specialised science teams. But the VMC is different: it had a purely operational purpose (successfully completed in 2003 with Beagle's separation) and as such it is not operated by scientists, but by flight controllers.

3. What format are the images we get from the VMC? 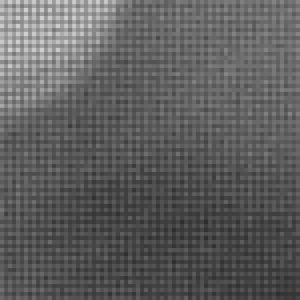 The camera produces a 640x480-pixel array of 8-bit intensity samples. These are received in the Mars Express Dedicated Control Room (DCR) as binary packets from the spacecraft. From these, ESOC software extracts the raw image binary files from the packets and performs a direct conversion of that data into the PNG files published on the website.

Within each raw image are 307,200 pixels of 8 bits each (640 lines of 480 pixels). The binary file stores each pixel as an unsigned integer representing a value between 0 (black) and 255 (white). The pixels are organised with the top left pixel of the image being at the start of the binary file, then running through the image line by line from left to right of each line.

4. Why are some of the VMC images so blurry or otherwise of low quality? 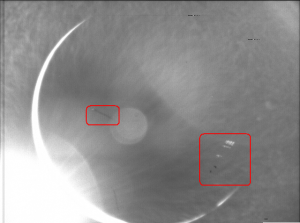 Actually, they are of rather good quality - as is the camera itself - given the original intended usage. The VMC is not a scientific instrument per se and it was designed for relatively low-resolution, fixed-focus operation. Its images should therefore not be compared to those coming from other Mars Express instruments. Further, since the camera was reactivated in 2007, at least two regions of artefacts now appear in all images (which may have been caused by debris scratching or being deposited upon the optics), and other artefacts intermittently appear.

The Mars Express Flight Control Team are still learning which exposure settings give the best results for any particular imaging series; illumination conditions and pointing vary dynamically from one orbit to the next.

5. Why do the last few image sets posted look the same?

They do look similar, but certainly not the same! This is to do with the orbit of Mars around the Sun and the evolution of the Mars Express orbit around Mars. The angles between the Sun, Mars and the spacecraft therefore vary gradually over the whole Martian year (two Earth years).

This means that for a period of days or weeks the lighting on Mars and the phase (like we see phases of the Moon from Earth) stays quite similar, so the images looks similar. If you look closer at the surface or at the pattern of clouds above it, you'll see that each image is a unique view of Mars. If you look back through the archive you'll see the broader change in the images evolving over weeks and months.

6. Where was Mars Express when each image was taken?

Most VMC images are captured close to apocentre, at around 10,000 km from Mars (this is due to a constraint preventing operation with other Mars Express instruments).

7. How often are images taken?

The images are taken in batches, called observations. The amount of images in an observation varies depending on the available time for VMC activities. VMC images are captured at just under one per minute.

These observations take place as often as possible, but this can vary widely. Sometimes we'll get image sets daily, and other times there may be only one new set in a month. VMC activities are last-priority and often must be delayed due to higher priority activities. Check the site often!

8. How long after an image is taken does it get posted?

This depends a lot on how much spare time the spacecraft has after sending all the primary Mars Express science data to Earth. After VMC pictures are taken they are stored in memory on the spacecraft and wait there to be sent back to Earth at the earliest free opportunity. The time waiting on board can vary from less than an hour to more than a week.

Once the images get a free slot the spacecraft sends them to Earth on a journey that takes the data between 4 and 22 minutes (depending on the position of Earth and Mars). They then arrive at a ground station and are sent to the spacecraft control centre, ESOC, where an automated tool picks up the images and posts them to the blog.

If you are a student, teacher, professor, scientist, photographer or a Mars fan of any age, we can use your help!

Since the VMC is operated on a best-effort basis, we would be delighted to have help from the general public with processing the images, removing artefacts, increasing sharpness and interpreting the images. Please see Help Us with the VMC for more details.

Post a question to use below - we'll get back to you as soon as possible.