The Visual Monitoring Camera (VMC) is mounted on Mars Express, ESA's deep-space probe now orbiting the Red Planet. It originally provided simple, low-tech photos of the Beagle lander separation, and is now back in action as the 'Mars Webcam'. In 2016, the VMC officially became a scientific instrument, and in the past few years data from the VMC has been instrumental to a number of scientific studies and publications. In addition, the VMC continues to provide stunning views of the Red Planet to the general public through Flickr.

Mars Express has been in orbit around Mars since December 2003. The mission comprised two spacecraft – the Mars Express orbiter and the Beagle 2 lander. To verify the correct separation and trajectory of the lander, the VMC (Visual Monitoring Camera) - a basic optical monitoring camera - was installed on the orbiter to image the retreating Beagle, which was successfully done in December 2003 (unfortunately, Beagle was later declared lost). This was the only use of the VMC camera prior to 2007.

Beagle 2 during separation, 19 December 2003: The bright spot on the left-hand side of this picture is the back side of Beagle 2, slowly drifting away from Mars Express. This image, taken 9:33 CET, 19 December 2003, shows the Beagle 2 lander when it was about 20 metres away from Mars Express, enroute to a surface landing on Mars. Beagle 2 was subsequently lost (Credits: ESA).

It seemed somehow inappropriate that the photographic capabilities of the VMC - an excellent, if modest, camera - should remain forever dormant. Due to the camera's unique location, it could, for example, capture crescent images of Mars that are not obtainable from Earth. VMC's wide field of view also provides global images of Mars - something that is not currently provided by any other spacecraft.

VMC back in action

In 2007, the Mars Express Flight Control Team based at ESA's European Space Operations Centre (ESOC), Darmstadt, Germany, began a test campaign to see whether the camera could be used to image Mars. It wasn't even known if the camera would function at all after over three years of inactivity in deep space. But the VMC did, indeed, come back to life and the results to date have been very encouraging. Throughout 2007, the team ran a test campaign to verify the camera's capabilities, followed by fine-tuning to find the optimal parameters for Mars imaging.

Photograph of the VMC's IRIS-1 system. This shows the IRIS-1 "camera on a chip" system and power support internals of the VMC camera before application of the housing (Credits: ESA).

The task was made more challenging due to long periods, particularly during eclipse season, when on-board memory, downlink slots or command uplink time weren't available due to higher priority demands.

October and November 2007 saw the first regular operations, with observations occurring approximately every three days. From 2016 to 2018, VMC observations were routinely inserted by the Flight Control Team into the Mars Express planning cycle, on a strict non-interference, time-available basis with respect to formal payload activities.

VMC gets an ‘upgrade’!

In 2018, operations for the VMC camera were moved to the European Space Agency, ESA’s facility in Spain, and integrated into the planning for all of the Mars Express science instruments. The science operations team at ESAC also gained a new Young Graduate Trainee working for the VMC full time, as well as starting a collaboration with the University of the Basque Country Planetary Science group (UPV-EHU) which became the official VMC science team. This allowed the team to expand the capabilities of the VMC, including the variety and amount of observations taken using the VMC, and to use the data for scientific studies. The close contact between the VMC science team and the science operations team at ESAC allowed the VMC observations to be driven by scientific needs, whilst still providing awesome images of Mars on a sometimes daily basis via the Flickr page.

Science with the VMC

Now, after a lot of hard work over the past few years, VMC data is officially available on the Planetary Science Archive alongside the data from the other instruments on Mars Express. 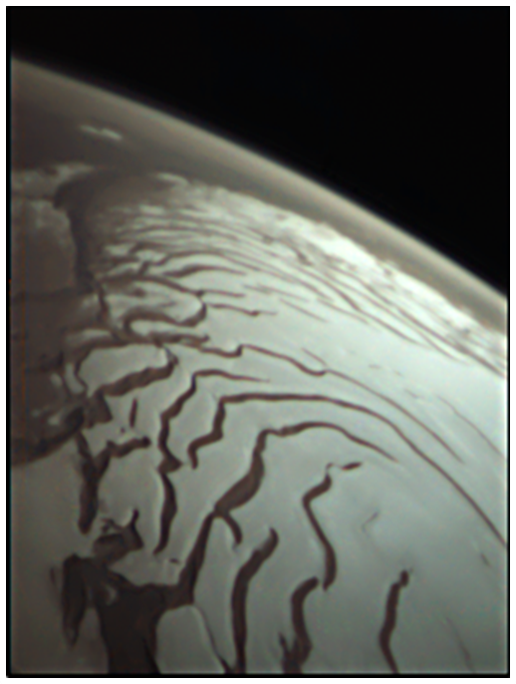 The VMC team hope that by making this data available to the rest of the Mars community, that this will open the door to even more scientific studies using VMC data.

And remember: VMC images are just simple photos gathered by one ordinary camera - but it's a camera mounted on a spacecraft orbiting one of the solar system's most exciting planets, millions of km from home!