At first glance, Venus appears much like the Earth: their size and mass are fairly similar and so are their densities. Like Earth, Venus’ rocks are likely mostly basaltic, created during intense periods of volcanic activity when the planets formed around four and a half billion years ago. Both planets have an atmosphere, too.

But it turns out that any similarities end there. Close up, they are worlds of extremes.

The Venus greenhouse
Under a thick, choking atmosphere of carbon dioxide and sulphuric dioxide clouds the surface pressure is 90 times greater than on Earth – that would be like walking underwater at a depth of 900 metres in Earth’s oceans! Then there’s the oven-hot 465 degrees Celsius surface temperature to contend with – the hottest planetary surface in the Solar System.

On Earth, the natural greenhouse effect is dominated by water vapour, a very efficient greenhouse gas, with contributions from carbon dioxide, methane and ozone. Without this naturally warming greenhouse effect we’d be shivering at -18 degrees Celsius! 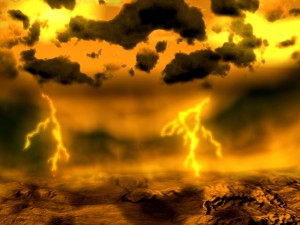 On Venus, only ten percent of the incoming solar radiation reaches the surface; most of it is reflected back into space by the planet’s dense cloud cover, making Venus appear to shine brightly in the night sky.

Despite the small amount of solar radiation reaching the surface, it is trapped effectively by gases in the lower atmosphere, giving rise to the high temperatures. Scientists think that Venus was once more like the Earth, but at some point it started heating up uncontrollably.  Any water that may have once existed in oceans on the surface evaporated into the atmosphere causing further runaway heating. It’s like an Earth gone wrong with a runaway greenhouse effect that some planetary scientists say should be a warning as to what may become of our home planet if human activities – such as burning fossil fuels and destroying forests, which intensifies the natural greenhouse effect – continue.

A volcanic pressure cooker
Venus’ surface is a land of gently rolling uplands and volcanoes interspersed with low-lying plains and dotted with large impact craters. There are few small impact craters thanks to the planet’s thick atmosphere that burns up small meteoritic debris before it can strike the surface.  The oldest craters are in fact very young, no more than 500 million years old, suggesting that perhaps the planet undergoes regular global eruptions of lava that covers the entire surface.

On Earth, the steady eruption of volcanoes and shifting plates of crust that give rise to earthquakes mean that energy is released gradually over long periods of time. Venus, however, is like a volcanic pressure cooker with a tightly sealed lid that is only occasionally ruptured, but with catastrophic consequences. 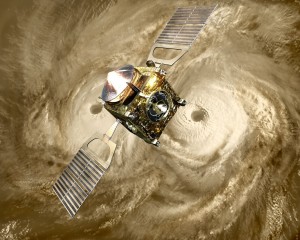 A backwards planet
Venus rotates backwards with respect to Earth, therefore the Sun appears to rise from the west. It also rotates very slowly – one Venus day takes 243 Earth days, which is longer than its 225 day year! However, since the planet rotates backwards, the time between a day measured from noon to noon becomes 117 days. Despite these long days, the winds on Venus are so fierce that they race around the planet in just four days.

ESA’s Venus Express, currently the only spacecraft in orbit around Earth’s mysterious sister planet, is providing spectacular detail of the complexities of the atmosphere, right down to the surface. Studying Venus is extremely important to learn how Earth and Venus, despite forming in the same neighbourhood and with similar planetary processes occurring on both worlds, grew up to be so different.