Before the Christmas break we left you with a bounty of comet images to create a movie – if you took on the challenge, do post links to your videos on the relevant post: CometWatch – the movie. We are looking forward to seeing your mosaics and movies!

We were also keeping our ear to the ground for an update on the whereabouts of Philae, but attempts to identify the lander in high-resolution OSIRIS images acquired from a distance of 20 km have reportedly not yet been successful. (Note, the link is to a German news story in which OSIRIS PI Holger Sierks told the Göttinger Tageblatt “We have still not discovered the lander.”) The scientists continue to scour the images for confirmation of the landing site. 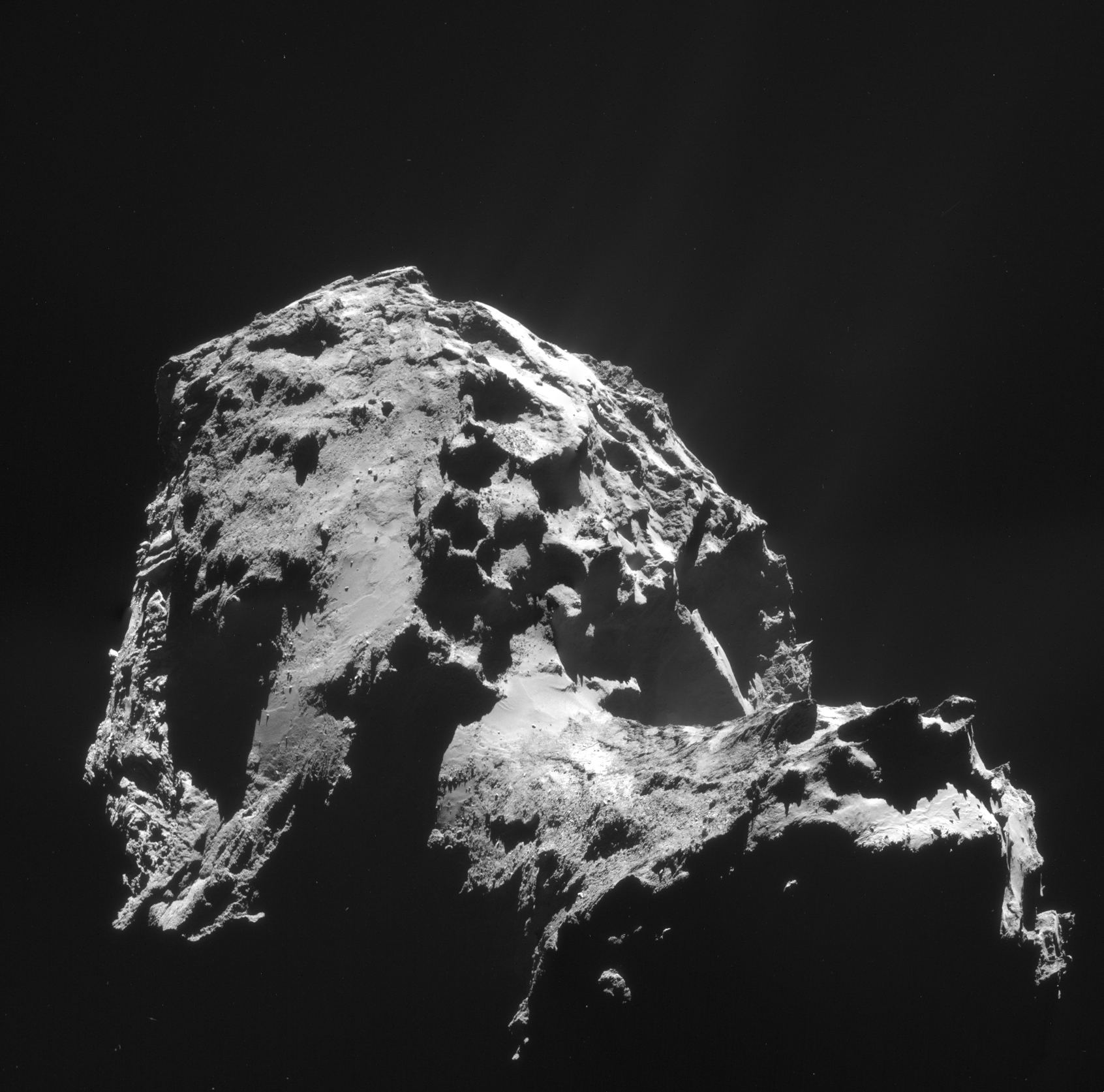 Rosetta is now orbiting comet 67P/C-G at a distance of about 30 km. The images included in today’s post were the first to be taken in 2015, acquired shortly after midnight UTC spacecraft time on 1 January from a distance of 28.4 km from the comet centre. The mosaic, oriented with the smaller lobe on the right and the larger lobe on the left, has a resolution of 2.4 metres/pixel and measures 4.1 x 4.0 km. The four individual 1024 x 1024 NAVCAM frames making up the mosaic, which each measure about 2.5 km across, are provided at the end of this post. Because rotation and translation of the comet during the imaging sequence make it difficult to create an accurate mosaic, always refer to the individual images before drawing conclusions about any strange structures or low intensity extended emission. For example, there are artefacts in this mosaic on the far left and towards the centre of the image, respectively. 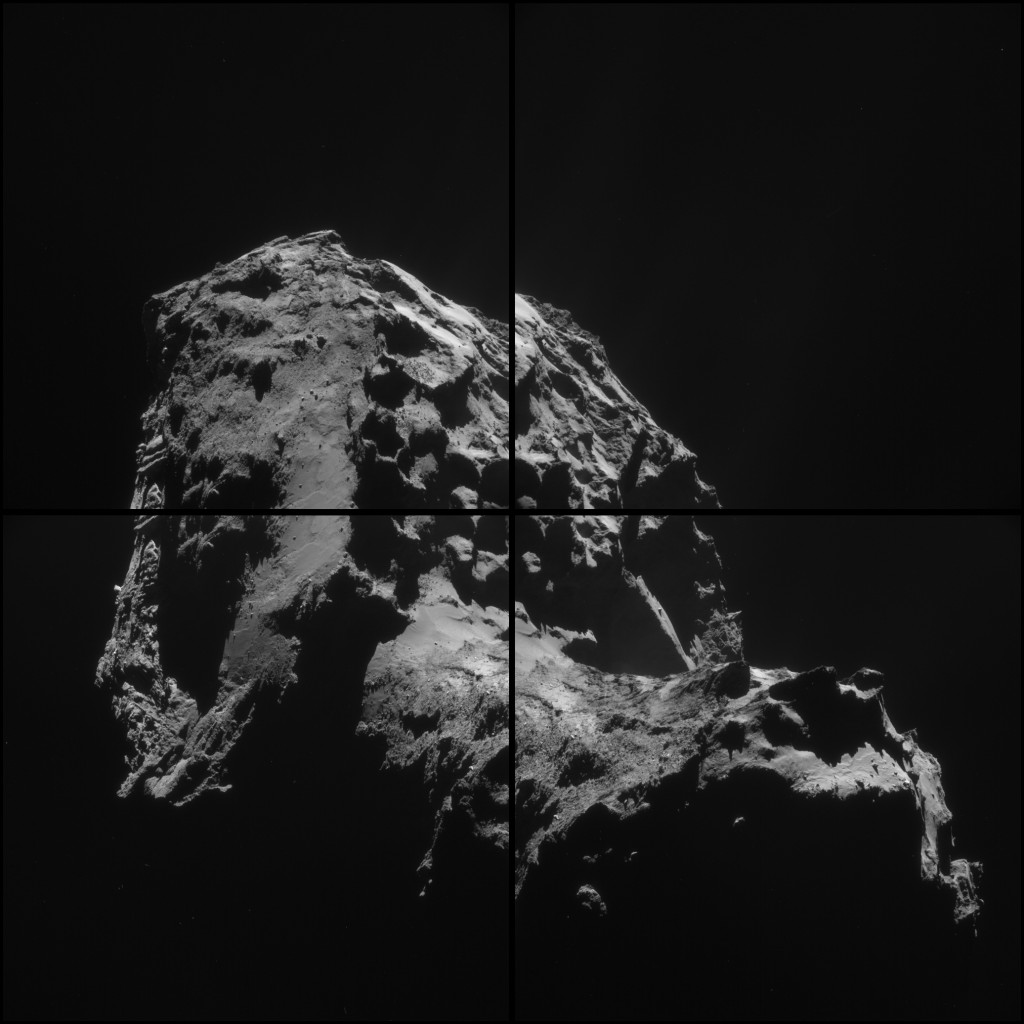 Rosetta will continue in its 30 km orbit until 3 February, before building up to its closest flyby yet. On 4 February, Rosetta will start to move some 140 km from the comet, before swooping down to just 6 km from the surface on 14 February.

This close flyby will allow instruments to take images and spectra of the surface with unprecedented resolution and to directly sample the very inner cometary coma in order to learn more about how the comet’s characteristic coma and tail are created.

After this exciting event, Rosetta will continue making a series of flybys of the comet, the exact distance determined by the activity of the comet at any given time. The activity is expected to increase over the coming months as the comet moves ever closer to perihelion on 13 August. That is, the closest distance to the Sun along its orbit, which for 67P/C-G is 186 million kilometres, roughly between the orbits of Earth and Mars. Rosetta will be watching as the activity increases and then subsides again, and how the comet’s surface features change and evolve during this period.

Scientists also hope that the increasing solar energy in the coming months will be enough to revive the lander Philae from its hibernation.

In between these mission milestones there will be regular releases of science papers and data (dates of data releases TBC). Presentations of the latest analyses will also be made at science conferences over the course of the year, including EGU (April), EPSC (September) and AGU (December). We’ll continue to report on the key science results here on the blog and/or via the main ESA web portal.

We’ll also be continuing with our regular CometWatch releases via the blog.

The individual 1024 x 1024 pixel NAVCAM image frames for today’s CometWatch entry are provided below. As ever, we encourage you to create mosaics and share them on your social media channels with the credit line: ESA/Rosetta/NAVCAM – CC BY-SA IGO 3.0. 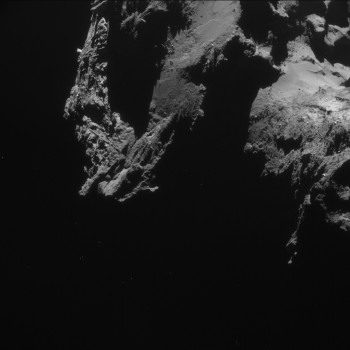 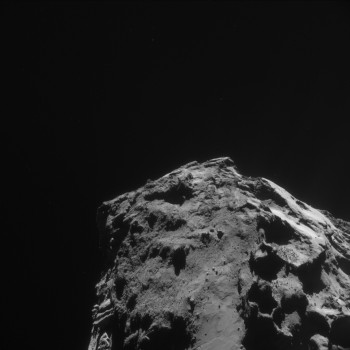 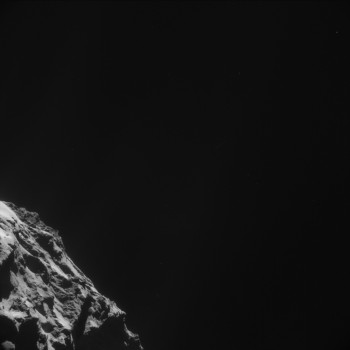 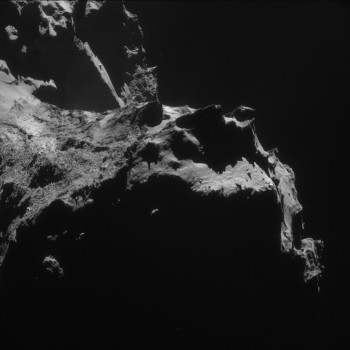