Matt Taylor at the media briefing on 11 November at ESOC. Credit: ESA/C.Carreau

During this morning’s media briefing at the European Space Operations Centre (ESOC) in Darmstadt, Germany, there was also an overview of the scientific activities conducted at Comet 67P/C-G so far, presented by Matt Taylor, ESA Rosetta project scientist.

Regular readers of this blog are surely familiar with the progress achieved by Rosetta in the past few months, but for those who are relatively new to the mission, we will summarise Matt Taylor’s talk and present the highlights from the science operations so far.

Rosetta started scientific operations on 7 May 2014, while still at a distance of almost two million km from the comet. At the time, the comet covered less than one pixel on the sensors of the cameras on Rosetta, but as the spacecraft approached its target, scientists started to realise that the shape of the comet was quite different than what had been assumed on the basis of observations from telescopes on the ground and orbiting around Earth.

We are now all well familiar with Comet 67P/C-G’s curious shape with a smaller and larger lobe – which scientists now almost customarily call the ‘head’ and ‘body’, connected by the ‘neck’.

Rosetta closed in on its target on 6 August, at a distance of about 100 km, and has been conducting a series of manoeuvres ever since, getting down to distances of less than 10 km from the comet’s centre. Over the past three months, scientists from the OSIRIS team have been studying the comet and its surface in great detail to enable the selection of a landing site for Philae and the landing itself.

Meanwhile, other instruments on Rosetta have been studying the comet under different ‘angles’, from the global properties of the coma to the very local properties of dust grains. Using VIRTIS observations in infrared, scientists have measured the temperature at the surface of the comet, which is warmer than expected, revealing that the surface is made of dusty, porous material.

Ever since ancient history, comets have fascinated humans because of their unpredictability. And even now, when we know the behaviour of many comets so well to send a mission to orbit one, comets are still exciting because they do things that we don’t expect. One such surprise was an outburst of the comet’s activity seen in March/April, although at the time Rosetta was still too distant to figure out what was causing the increase in activity. 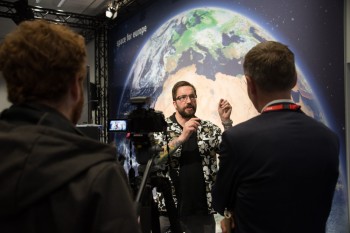 The MIRO instrument on Rosetta started detecting water outgassing from the comet in June. At the time, Rosetta was 350,000 km away from the comet – roughly the distance between Earth and the Moon – and MIRO saw 67P/C-G ‘sweat’ about 300 ml of water per second – the equivalent of two glasses. The activity has increased ever since, with peaks of 5 liters of water per second seen by MIRO recently.

ROSINA, the ‘comet sniffer’ on Rosetta, has detected a variety of molecules in the coma of 67P/C-G, including water, carbon monoxide, carbon dioxide, methane, and a few nitrogen or sulphur species. Recently, also VIRTIS detected both water and carbon dioxide in the comet’s coma, measuring their relative abundance.

As for the dust, the GIADA instrument on Rosetta has been measuring dust particles and their velocities, while COSIMA has caught a handful of dust grains and has been analysing them, revealing that at leas one of them – the famous ‘Boris’ dust grain – contains sodium and magnesium.

Another way to study the comet’s activity is by observing the ionised gas, or plasma, in the comet’s environment and how it interacts with the solar wind, as the stream of electrically charged particles released by the Sun is perturbed by the presence of the comet. This is performed by Rosetta’s Plasma Consortium (RPC), a set of five instruments on Rosetta, which recently detected interesting oscillations in the magnetic field in the comet’s environment.

In addition to all the measurements performed by Rosetta is at 67P/C-G, astronomers are using telescopes on the ground to observe the comet’s environment and its 19,000-km-long coma, exploiting this unique opportunity to monitor the comet while Rosetta is there and collecting data. They will continue to do so throughout the next year leading to perihelion in August 2015.

You can also watch a short movie showing the highlights of Rosetta so far, through the voices of some of the many people involved in the mission.