How Rosetta arrives at a comet

After travelling nearly 6.4 billion kilometres through the Solar System, ESA’s Rosetta is closing in on its target, but how does a spacecraft actually arrive at a comet?

The journey began on 2 March 2004 when Rosetta launched on an Ariane 5 G+ from Europe’s spaceport in Kourou. Since then, Rosetta has had to loop around the Sun five times, picking up speed through three essential gravity assist manoeuvres at Earth and one at Mars, to put the spacecraft on an orbit similar to its destination: comet 67P/Churyumov-Gerasimenko.

This icy target is on an elliptical 6.5-year solar orbit that takes it from beyond the orbit of Jupiter at its furthest point, and between the orbits of Mars and Earth at its closest to the Sun. 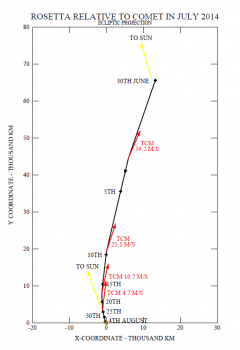 Rosetta manoeuvres July 2014 showing direction and magnitude of thruster burns (red arrows). Spacecraft has been approaching comet 67P, moving downward in the diagram; the resulting effect has been to brake Rosetta with respect to the comet. Credit: ESA Flight Dynamics team

Rosetta’s goal is to match the pace of the comet – currently some 55 000 km/hour – and travel alongside it with a relative velocity of just 1 m/s between them, roughly equivalent to walking pace.

Thus, since early May, Rosetta’s mission controllers have been pacing the spacecraft through a tightly planned series of orbital manoeuvres designed to slow the spacecraft’s velocity – with respect to the comet – by about 2800 km/hour (775 m/s) to ensure its arrival at its comet target on 6 August.

“Rosetta’s gravity-boost swing-bys around Earth in 2005, 2007 and 2009, and Mars in 2007, put us on the right track, but we still needed to change Rosetta’s speed and adjust its trajectory slightly to avoid a flyby mission,” says Rosetta Flight Director Andrea Accomazzo

Indeed, by early May, if no further orbit corrections had been made, Rosetta and the comet would have passed with 50 000 km between them within just a few weeks.

That’s where ESA’s flight dynamics experts came to the fore, having worked extensively behind the scenes to develop a series of ten orbit correction manoeuvres that would use Rosetta’s jet thrusters to match the spacecraft’s speed and direction with that of the comet’s orbit.

“Our team is responsible for predicting and determining Rosetta’s orbit, and we work with the flight controllers to plan the thruster burns,” says Frank Dreger, Head of Flight Dynamics at ESA’s operations centre in Darmstadt, Germany.

The burns were carried out every two weeks in May and June and, after the first, short, test burn, the three subsequent manoeuvres were some of the longest ever performed by an ESA spacecraft – exceeding seven hours. These first burns dramatically reduced Rosetta’s speed with respect to the comet by 668 of the necessary 775 m/s required by 6 August, when Rosetta will “arrive” at a distance of just 100 km from the comet.

“The biweekly schedule for the first four burns gave us adequate time to assess performance, determine Rosetta’s resulting orbit and then calculate the direction and duration of the next manoeuvre,” adds Dreger.

Throughout July, the burns were conducted on a weekly basis, culminating in two short orbit insertion burns set for 3 and 6 August, respectively.

“If any glitches in space or on ground had delayed the most recent burns, orbital mechanics dictate that we’d only have had a matter of a few days to fix the problem, re-plan the burn and carry it out, otherwise we run the risk of missing the comet,” says Trevor Morley, a flight dynamics specialist at ESOC.

To help their calculations, flight dynamics experts are using a range of sophisticated techniques to determine Rosetta’s orbit with pinpoint accuracy.

Calculations are based on ranging and Doppler data provided by the ESA and NASA ground tracking stations that communicate with the spacecraft.

Teams also use images of the comet and of the background star field taken by Rosetta’s own cameras to conduct optical navigation. 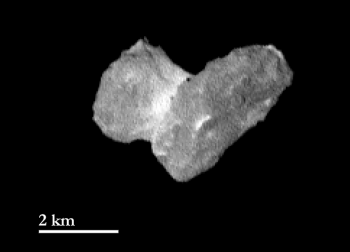 OSIRIS narrow angle camera view of 67P/C-G from a distance of 1950 km on 29 July 2014. Credits: ESA/Rosetta/MPS for OSIRIS Team MPS/UPD/LAM/IAA/SSO/INTA/UPM/DASP/IDA

“By early July, optical navigation allowed us to determine the separation distance between Rosetta and the comet to within 50 km accuracy,” says Morley.

Measurements from a pair of widely separated ground stations are used to determine the position of Rosetta to within 20 km at a distance over 400 million km from Earth.

Only a few of the world’s space agencies have perfected this highly precise technique.

The flight dynamics team’s job is far from over once Rosetta arrives at the comet. As Rosetta draws ever nearer, the physical properties of the comet will become increasingly important for determining Rosetta’s eventual orbit around it.

Based on images and Doppler tracking performed while close to the comet, the flight dynamics team are developing models for the comet’s gravity potential, its shape and its rotational motion. This is crucial for being able to navigate Rosetta in proximity of the comet.

Once Rosetta arrives at comet 67P/C-G on 6 August it will travel along a series of three arcs at an altitude of 100 km slightly ahead of the comet with respect to the Sun, subsequently repeating this triangular shaped trajectory at an altitude of 50 km, all the while assessing the comet’s behaviour and learning how to operate in uncharted territory.

These manoeuvres will be controlled by thruster burns, then, once at an altitude of about 30 km, the comet’s own weak gravity should be able to keep Rosetta in orbit. Depending on the activity of the comet, the aim is to orbit even closer, perhaps as close as 10 km.

As the comet becomes more active, observations by the suite of science instruments on board Rosetta will be vital for characterising the comet’s coma – the result of outgassing of volatile material that gives comet’s their characteristic fuzzy ‘atmosphere’ and tail. Learning how the coma forms and how the gas pressure from the comet’s surface influences the spacecraft will be critical for the flight dynamics team since this can affect the speed and direction of Rosetta’s orbits and, eventually, the descent of lander Philae to the comet’s surface.

“On top of a good physical model of the comet nucleus, we also need a good coma model that tells us the density and velocity of particles being emitted from the comet,” says Frank Budnik, a flight dynamics specialists at ESOC.

“We expect the spacecraft to be affected by the coma in addition to the comet body’s gravitational pull, and these all play into calculating the orbits and the thruster burns required to keep Rosetta near the comet.”

As the comet moves closer to the Sun during 2015, it will heat up and become more active, throwing out increasing quantities of gas and dust. Combined with the low gravity, this ever-changing activity will make for hugely challenging operations, trying to keep the spacecraft close enough to the comet to do good science, while ensuring that it remains safe.

But first: save the date for 6 August, when Rosetta is set to become the first spacecraft in history to ever attempt to rendezvous with a comet.