The dual personality of comet 67P/C-G 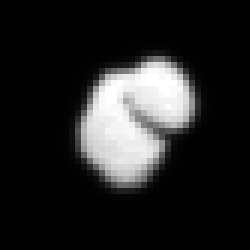 This week’s images of comet 67P/Churyumov-Gerasimenko reveal an extraordinarily irregular shape. We had hints of that in last week’s images and in the unscheduled previews that were seen a few days ago, and in that short time it has become clear that this is no ordinary comet. Like its name, it seems that comet 67P/C-G is in two parts.

What the spacecraft is actually seeing is the pixelated image shown at right, which was taken by Rosetta’s OSIRIS narrow angle camera on 14 July from a distance of 12 000 km.

A second image and a movie show the comet after the image has been processed. The technique used, called “sub-sampling by interpolation”, only acts to remove the pixelisation and make a smoother image, and it is important to note that the comet’s surface features won’t be as smooth as the processing implies. The surface texture has yet to be resolved simply because we are still too far away; any apparent brighter or darker regions may turn out to be false interpretations at this early stage.

But the movie, which uses a sequence of 36 interpolated images each separated by 20 minutes, certainly provides a truly stunning 360-degree preview of the overall complex shape of the comet. Regardless of surface texture, we can certainly see an irregular shaped world shining through. Indeed, some people have already likened the shape to a duck, with a distinct body and head.

Although less obvious in the ‘real’ image, the movie of interpolated images supports the presence of two definite components. One segment seems to be rather elongated, while the other appears more bulbous.

Indeed, comet 8P/Tuttle is thought to be such a contact binary; radio imaging by the ground-based Arecibo telescope in Puerto Rico in 2008 suggested that it comprises two sphere-like objects. Meanwhile, the bone-shaped comet 103P/Hartley 2, imaged during NASA’s EPOXI flyby in 2011, revealed a comet with two distinct halves separated by a smooth region. In addition, observations of asteroid 25143 Itokawa by JAXA’s Hayabusa mission, combined with ground-based data, suggest an asteroid comprising two sections of highly contrasting densities.

Is Rosetta en-route to rendezvous with a similar breed of comet? The scientific rewards of studying such a comet would be high, as a number of possibilities exist as to how they form.

One popular theory is that such an object could arise when two comets – even two compositionally distinct comets – melded together under a low velocity collision during the Solar System’s formation billions of years ago, when small building blocks of rocky and icy debris coalesced to eventually create planets. Perhaps comet 67P/C-G will provide a unique record of the physical processes of accretion.

Or maybe it is the other way around – that is, a single comet could be tugged into a curious shape by the strong gravitational pull of a large object like Jupiter or the Sun; after all, comets are rubble piles with weak internal strength as directly witnessed in the fragmentation of comet Shoemaker-Levy 9 and the subsequent impacts into Jupiter, 20 years ago this week. Perhaps the two parts of comet 67P/C-G will one day separate completely. 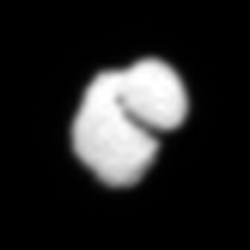 On the other hand, perhaps comet 67P/C-G may have once been a much rounder object that became highly asymmetric thanks to ice evaporation. This could have happened when the comet first entered the Solar System from the Kuiper Belt, or on subsequent orbits around the Sun.

One could also speculate that the striking dichotomy of the comet’s morphology is the result of a near catastrophic impact event that ripped out one side of the comet. Similarly, it is not unreasonable to think that a large outburst event may have weakened one side of the comet so much that it simply gave away, crumbling into space.

But, while the interpolated images are certainly brilliant, we need to be closer still to see a better three-dimensional view – not to mention to perform a spectroscopic analysis to determine the comet’s composition – in order to draw robust scientific conclusions about this exciting comet.

Rosetta Mission Manager Fred Jansen comments: “We currently see images that suggest a rather complex cometary shape, but there is still a lot that we need to learn before jumping to conclusions. Not only in terms of what this means for comet science in general, but also regarding our planning for science observations, and the operational aspects of the mission such as orbiting and landing.

“We will need to perform detailed analyses and modelling of the shape of the comet to determine how best we can fly around such a uniquely shaped body, taking into account flight control and astrodynamics, the science requirements of the mission, and the landing-related elements like landing site analysis and lander-to-orbiter visibility. But, with fewer than 10 000 km to go before the 6 August rendezvous, our open questions will soon be answered.”