Astronomers at the University of Hawaii Institute for Astronomy (IfA) have spotted what is believed to be the first object – an asteroid or comet – that originates outside of our solar system. Observations of the object, dubbed A/2017 U1, were also made by ESA’s Near-Earth Object (NEO) team working at the Agency’s NEO Coord Centre at ESA/ESRIN, near Rome.

This animation shows the path of A/2017 U1, which is an asteroid – or perhaps a comet – as it passed through our inner solar system in September and October 2017. From analysis of its motion, scientists calculate that it probably originated from outside of our solar system.
Credits: NASA/JPL-Caltech

The follow-up observations were made by ESA astronomer Marco Micheli, himself a graduate from the Institute for Astronomy, using a telescope at ESA’s Optical Ground Station on Tenerife, Canary Islands.

“This was certainly an unexpected find and, if confirmed, it may be the first sighting of an asteroid or other object passing through our Solar System that originated from elsewhere in our galaxy,” says Marco.

Small asteroid or comet ‘visits’ from beyond the Solar System

A small, recently discovered asteroid – or perhaps a comet – appears to have originated from outside the solar system, coming from somewhere else in our galaxy. If so, it would be the first “interstellar object” to be observed and confirmed by astronomers.

This unusual object – for now designated A/2017 U1 – is less than a quarter-mile (400 meters) in diameter and is moving remarkably fast. Astronomers are urgently working to point telescopes around the world and in space at this notable object. Once these data are obtained and analyzed, astronomers may know more about the origin and possibly composition of the object.

A/2017 U1 was discovered Oct. 19 by the University of Hawaii’s Pan-STARRS 1 telescope on Haleakala, Hawaii, during the course of its nightly search for near-Earth objects for NASA. Rob Weryk, a postdoctoral researcher at the University of Hawaii Institute for Astronomy (IfA), was first to identify the moving object and submit it to the Minor Planet Center. Weryk subsequently searched the Pan-STARRS image archive and found it also was in images taken the previous night, but was not initially identified by the moving object processing. 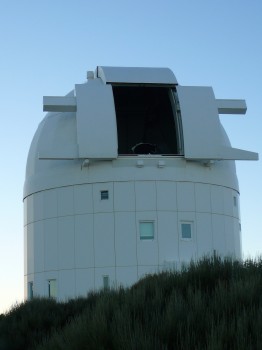 Weryk immediately realized this was an unusual object. “Its motion could not be explained using either a normal solar system asteroid or comet orbit,” he said. Weryk contacted IfA graduate Marco Micheli, who had the same realization using his own follow-up images taken at the European Space Agency’s telescope on Tenerife in the Canary Islands. But with the combined data, everything made sense. Said Weryk, “This object came from outside our solar system.”