Reflections at the end of Cassini

On 25 December 2004, after a seven-year journey as part of the international NASA/ESA/ASI Cassini-Huygens mission to Saturn, ESA’s Huygens lander separated from NASA’s Cassini orbiter to make a lonely’, one-way voyage to Titan, Saturn’s largest moon.

On 14 January 2005, as the world watched breathlessly, Huygens plunged into Titan’s atmosphere, deployed parachutes and then spent a leisurely two-and-a-half hours descending to the surface, transmitting science data the entire time, which were relayed by Cassini back to NASA’s 70m deep-space network on Earth.

At 13:34 CET, that day, Titan time, Huygens landed with a bounce and confirmation was received at ESA’s ESOC mission control centre, Darmstadt, Germany, with the first data signals arriving at 17:19 CET. The probe continued transmitting data from the surface, even after Cassini had orbited out of view below Titan’s horizon. Huygens’ touchdown marked just the second time a moon was ever landed upon, and is still today the most distant landing ever made by an artificial object.

Titan is the largest of Saturn’s moons and is one of the most compelling destinations in our Solar System. Its 1000-km-thick atmosphere – many times thicker than Earth’s – comprises primarily nitrogen and methane, and the moon’s frigid, -180ºC surface features mountain ranges, methane seas, coastline estuaries and a complex mix of organic matter.

On that day at ESOC, ESA’s Huygens Spacecraft Operations Manager Claudio Sollazzo was on console in the Main Control Room, watching intently as the signals came in via Cassini. He had returned to ESOC just a few days earlier, after spending four years working as part of the Cassini mission team at NASA/JPL in California. For the better part of two decades, his job had been to ensure that Huygens was ready for its epic mission, and he was ESA’s point man for Huygens, first in Europe and later on the ground at JPL, as the Cassini mission went through numerous stages of proposals, approvals, US and European funding negotiations, threats of cancellation and – ultimately – launch on 15 October 1997.

After Huygens, Claudio too up duties at ESA’s Columbus Control Centre near Munich, and he continued working with many US and European colleagues as a Mission Director for European astronauts on the ISS. In 2015, he retired from ESA, but not from space flight! Today, he is working at Johnson Space Center in Houston as the Italian space agency (ASI) representative Mission Manager for ESA astronaut Paolo Nespoli, now on the ISS for his five-month VITA mission.

Claudio agreed to share some of his impressions of Cassini-Huygens, as the Cassini orbiter’s historic mission comes to an end tomorrow, on 15 September. 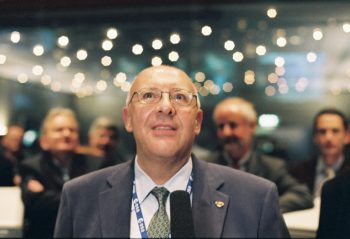 Cassini-Huygens was a huge part of my personal and professional life. My children were very small when I began working on the mission, and today they are all grown adults. They had just finished high school when Huygens landed on Titan!

I am sad to see Cassini finally end, but fuel is getting low and I am nonetheless very happy that, like Huygens itself, it has delivered so much incredible data from the Saturn system – including numerous flybys of Titan, where my little Huygens sits now, eternally frozen a billion km away.

I must say, I suffered a lot when the landing was complete. Yes, it was an epic triumph, and European and US scientists received a great deal of data from Huygens. But my professional life had been dedicated to the probe and with its mission complete, I was at a loss for what to do. Happily, I was able to shift my professional focus and move to ESA’s Columbus Control Centre in Oberpfaffenhofen, near Munich, where I could spend another decade working with many colleagues from Europe, NASA and the ISS partners.

If I have to think of my strongest memory of Huygens now, it’s not just the mission, or the scientific data, or the triumph of landing on a moon of Saturn. More importantly, I have very strong memories of working for many years with colleagues at ESA and at NASA – especially at JPL.

I am Italian, from Europe, and for me there was a bit of a culture shock when I moved to Pasadena. But I eventually got used to the American way and later I was struck by how deep our collaboration became. Make no mistake about it, once the Americans know you are competent, that you know your business and that you are trustworthy – they trust you; they accept you as one of their own.

Now, I am working at Johnson Space Center in Houston on Paolo Nespoli’s mission on the ISS, and I see the same deep collaboration – perhaps even more so.  I thoroughly enjoy working with the US colleagues: even today, after decades of work with NASA, our cultures may be different, but I and my European colleagues work well with the Americans; we solve problems and we get the job done.

Cassini and Huygens have been scientific, engineering and technical triumphs. But more importantly, they have shown that we humans can work together across cultures and other barriers, and I hope this inspires others to do the same in the future.