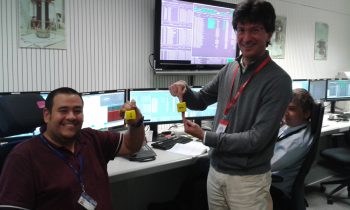 So, while main science has ended as of today (see LISA Pathfinder To Conclude Trailblazing Mission), there are still a few weeks until final shutdown on 18 July.

What do you do with a perfectly functioning spacecraft?

Why, you use it for testing, of course – especially the sort of testing that can’t normally be done during routine science operations (due to interference with prime mission, technical risk, etc.).

At ESOC, the LPF team are conducting a series of hardware tests; as an all-round technology demonstration satellite, the spacecraft carries industrial experiments that need in-flight hardware and operational testing.

“In this photo from today’s operations, operations engineer Jose Mendes and visiting scientist Daniele Bortoluzzi are discussing what the test masses are doing as we perform repeated release attempts. Very delicate operation in zero-g!”

Steve explains that this testing is related to being able to release a cube in zero-g without imparting any energy to the mass.

“There are around 2 mm separating the test mass from the housing wall [inside the spacecraft’s LISA Technology Package (LTP)] and the electrostatic actuation that we use to control the position and orientation of the test mass has a maximum force authority of about a micro Newton.”

“This is the force of a mosquito landing on your hand. So any motion imparted to the mass on release is extremely difficult to hold steady.”

The experiments were trialing various release methods to try to characterise the release mechanics.”